Pancreatic neuroendocrine tumors (pNETs) account for a small percentage of all pancreatic malignancies, and due to their insidious course, most present with metastatic disease (1). Anti-proliferative treatments that are available to reduce the tumor burden and to delay tumor progression encompass tumor debulking, molecular targeted therapy, chemoembolization, receptor-targeted radiotherapy, ablative methods and cytotoxic drugs (2-5). 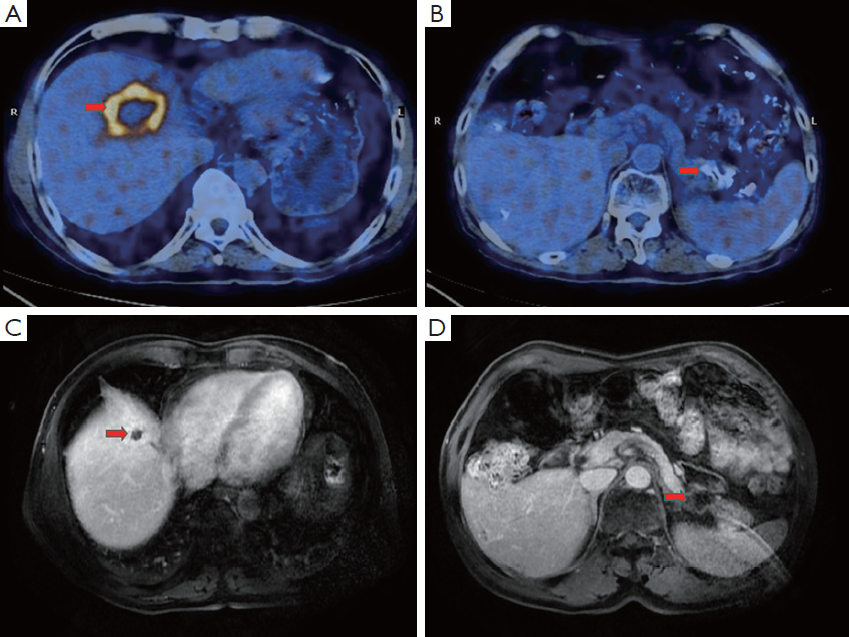 Figure 1 Imaging evaluation of the primary and metastatic lesions before and after treatment. (A,B) PET/CT scanning revealed a 57 mm × 37 mm soft mass in the pancreatic tail and multiple nodules in the liver (sized from 12 mm × 12 mm to 54 mm × 37 mm); (C,D) MRI performed in February 2013 demonstrated a favorable prognosis for the patient, indicating a decreased size for the primary tumor at the pancreatic tail (20 mm × 20 mm) for and the hepatic lesions (sized 12 mm × 12 mm to 30 mm × 20 mm). 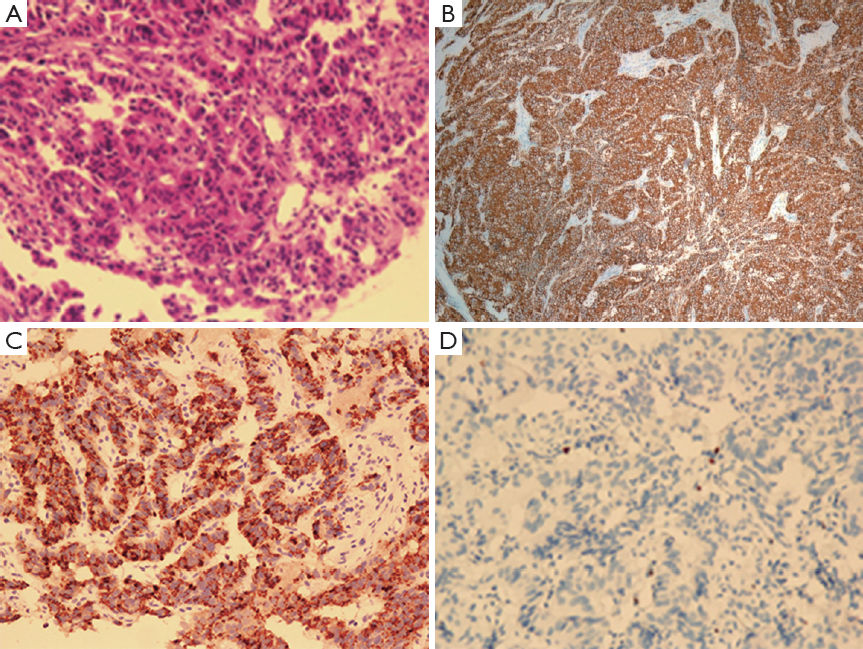 Due to the distant metastasis, the patient was referred to a multidisciplinary team (MDT) for better therapeutic evaluation. He was consequently prescribed the following medications: omeprazole 40 mg b.i.d., somatostatin analogs (SSAs) (octreotide LAR) 20 mg i.m. q.28d and interferon α (IFNα) 3 MIU i.h. q.o.d. (overall duration). For the metastatic lesions, he first underwent transarterial chemoembolization (TACE) (with doxorubicin 10 mg, mitomycin 10 mg, carboplatin 300 mg, 5-FU 500 mg and iodized oil 22 mL). The patient responded well to the treatment, except that he suffered from minor side effects, such as grade 1 nausea, vomiting and grade 2 leukocytosis.

The patient was closely followed from December 2008 to March 2013 (Figure 3), with re-examination and treatment assessment of the lesions’ progression. In December 2008, CT-guided perisplenic radioactive iodine-125 (125I) seed implantation therapy was performed on the pancreatic tail mass. The main side effects observed were grade 1 vomiting and leukocytosis. A CT scan in January 2009 found that the pancreatic and hepatic lesions had shrunken in size to 35 mm × 28 mm and to between 12 mm × 12 mm and 40 mm × 35 mm, respectively, compared with the sizes detected by PET/CT in October 2008. TACE was then performed in February 2009 for the liver metastases, and the manageable side effects that were observed were grade 1 nausea, vomiting and leukocytosis. CT review in March 2009 showed progressive shrinkage of the hepatic lesions (from 10 mm × 10 mm to 38 mm × 35 mm), whereas no visible changes were detected in the primary tumor’s size (35 mm × 28 mm). Radiofrequency ablation (RFA) therapy was initiated eight days later, and the only side effect noted was grade 1 leukocytosis. Subsequent CT reassessment in April 2009 showed stabilization of the pancreatic tail tumor, sized 35 mm × 28 mm, along with a gradual reduction in the diameters of the intrahepatic lesions to 10 mm × 10 mm and 38 mm × 31 mm. By June 2009, RFA therapy was additionally performed to treat the primary pancreatic tail tumor, and the minor side effect that was observed was grade 2 leukocytosis. Follow-up CT re-evaluation showed liquefactive necrosis, along with a degree of scarring of the primary lesion and stabilization of the intrahepatic lesions.

Figure 3 The treatment process and outcome of the patient from October 2008 to February 2013.

A subsequent CT scan in July 2010 showed liquefactive necrosis in part of the pancreatic tail lesion, sized 26 mm × 20 mm, and a decreased density of the hepatic tumor masses, to 10 mm × 10 mm and 35 mm × 30 mm. CT review in October and November 2010 showed gradual amelioration of the primary pancreatic tumor’s density and size (26 mm × 20 mm), and the metastatic hepatic lesions ranged in size from 10 mm × 10 mm to 33 mm × 28 mm. The patient underwent TACE (mitomycin 10 mg, carboplatin 300 mg and iodized oil 6 mL) and tumor microwave ablation (MWA) therapy for the liver metastases in January and February 2011, respectively. The side effects observed were grade 1 nausea, vomiting and grade 1 leukocytosis.

In April 2011, the patient was hospitalized for hyperthermia (38.6 °C) and acute right upper abdominal pain. Blood chemistry showed white blood count (WBC) 13.2 k/uL and neutrophilicgranulocyte (NE) 86%, CT results revealed multiple liver abscesses in segments 4, 6 and 7. The patient was thus referred for CT-guided abscess drainage. Full abdominal magnetic resonance imaging (MRI) evaluation in October 2011 showed a degree of increased activity in the hepatic lesions, which were approximately 12 mm × 12 mm to 30 × 20 mm in size. In an attempt to control the active lesions, the patient was administered MWA therapy, and MRI imaging follow-up was performed every 3 months from February to November 2012. The imaging reports satisfactorily described stabilization, both in size and in density, of the pancreatic tail tumor and the hepatic metastases. The patient was administered additional MWA therapy as maintenance therapy in February 2013, and no side effects were noted. The last MRI, performed in February 2013, demonstrated further stabilization of the lesions, indicating a good response to therapy and a favorable prognosis (Figure 1).

pNETs account for a small percentage of all pancreatic malignancies, with an incidence of <1 per 100,000 persons per year in population-based studies from Europe and Asia, but due to their insidious course, most pNETs present with metastatic disease (6,7). These tumors are functional (in 40-55% cases) or nonfunctional (in 45-60% cases), based on the presence or absence, respectively, of a particular clinical syndrome associated with hormone hypersecretion (6). Gastrinomas, being the most common functional, malignant pNET, account for up to 30% of these tumors. Gastrinomas secrete gastrin and are responsible for Zollinger-Ellison syndrome (ZES), which includes ulceration of the gastrointestinal tract, resulting in abdominal pain (79-100%), diarrhea (30-75%) and esophageal symptoms (31-56%) (8). These phenomena can lead to serious complications, such as ulcerative perforation, as in the case of our patient, who had a jejunal perforation due to gastric hyperacidity and underwent reconstructive surgery 6 months prior to his subsequent hospitalization.

Of all of the cases available on NETs in the Surveillance, Epidemiology, and End Results (SEER) database, 27% included distant metastases, which predominantly occurred in the liver (30-85%) (1). The median survival time for distant metastatic disease was 33 months in patients with G1-G2 pNETs, compared with only 5 months in patients with poorly differentiated carcinomas/neuroendocrine carcinoma (NEC) G3, and survival at 5 years was 35% and less than 5%, respectively (1). Because our patient had a type III metastatic hepatic lesion (diffuse multifocal lesions are found in 60-70% of cases), he was referred to an MDT. Several options were then considered to diminish his metastatic burden and improve his quality of life. Periodic doses of omeprazole, SSAs and IFNα were prescribed for symptomatic relief, and based on follow-up scanning results, CT-guided radioactive 125I seed implantation therapy, RFA therapy, TACE or MWA was chosen for treatment of the tumor lesions.

To date, there have been no randomized clinical trials comparing the efficacy of locoregional therapies with palliative surgery or medical treatment. The choice of a locoregional procedure for liver-targeted therapy depends on local expertise and the extent (the number and size of the lesions) and location of liver involvement. TACE is a common palliative technique that provides embolic blockade of nutrients and oxygen from the tumor-feeding arteries and offers direct chemotherapy to lesions, increasing the concentration of agents more than 20 times, in contrast to systemic chemotherapy. Response rates after embolization vary between 50% and 96% from study to study, and the median duration of the response extends up to 18 months (9,10).

RFA, which uses a probe inserted into a tumor, leads to tumor cell destruction by causing intracellular ion vibration. A clinical study performed at the Cleveland Clinic on 89 patients found that 90% of the patients experienced immediate relief of their symptoms after the procedure, with a mean progression free survival (PFS) of 1.3 years (11). Here, RFA was used as an “adjuvant” due to its limitations in eradicating multiple lesions greater than 3 cm in size. Just as other therapeutic procedures are accompanied by certain complications, the liver abscess experienced by our patient is one of the common side effects of this technique. MWA is another procedure that is similar to RFA, except that a nonionizing form of radiation causes extremely rapid oscillation of the water within tissues to generate heat, which in turn leads to coagulative necrosis. The intratumoral temperatures induced by MWA are consistently higher than those that can be achieved with RFA, and multiple lesions can be ablated during the same procedure.

Previous studies have shown that SSAs, IFNs and their combinations have comparable anti-proliferative effects when used during disease progression (12). Moreover, IFNα can yield disease stabilization in 40-50% of patients, so a dose of 3 MIU i.h. q.o.d. was indicated for our patient. As demonstrated by multiple studies, both SSAs and IFNs have been shown to be very effective for the symptomatic control of functional pNETs. In the United States, it has been further proven that higher doses of octreotide LAR (30 mg every 4 weeks) significantly lengthens the time of tumor progression compared with placebo (P=0.000072). The PROMID study (13) showed that octreotide LAR results in 66.7% disease stabilization in patients with metastatic neuroendocrine tumors, with 2.4% of recipients showing partial remission. However, due to differences in sex, race and body surface area, the effect of higher doses of octreotide LAR in Asians remains undetermined.

Regarding the chemotherapeutic regimen, the most commonly used cytotoxic agents are doxorubicin and streptozotocin (14). To date, streptozotocin has not been marketed in China, so even our experienced oncologist is unfamiliar with its efficacy and side effects. Doxorubicin, mitomycin, carboplatin and 5-FU regimens have thus been very commonly used effective approaches.

In 2011, a prospective, randomized phase 3 clinical trial (RADIANT-3) (15) showed a promising antitumor benefit for everolimus in patients with advanced progressive pNETs, with relatively minor drug-related adverse events. At a dose of 10 mg once daily, the estimated risk of progression or death compared with placebo was reduced to 65%. Promisingly, everolimus was also found to achieve partial tumor responses in at least 5% of the patients enrolled. Meanwhile, another randomized controlled study in 2011, performed by Raymond et al. (16), confirmed that continuous daily administration of sunitinib at a dose of 37.5 mg once daily improved PFS plus overall survival compared with placebo among patients with advanced pNETs. The objective response rate was found to be 9.3%, with two patients showing a complete response and six showing partial responses. To date, it is unclear whether sunitinib and everolimus, if combined, would have synergistic effects and limited toxicities.

In this report, we described a case whose treatment strategy was well planned and supervised by an MDT. Compared with the initial sizes of both the primary tumor and the metastatic liver lesions, a decrease in size of >30% was demonstrated in imaging evaluations. Thus, the patient can be characterized as having experienced partial remission based on the RECIST criteria (17). Additionally, complete remission of the presenting symptoms and treatment-related side effects was observed. To date, the patient has a favorable quality of life and above-average overall survivability, despite living with liver metastases, indicating a potentially favorable prognosis.