Primary central nervous system (CNS) germ cell tumors (GCTs) are rare and account for 0.5% of all primary CNS tumors in the West (1), while they are more common in China and other Asian countries and constitute approximately 2.0-7.9% of primary CNS tumors in adults or children (2,3). GCTs encompass a wide pathologic spectrum, and each specific subtype has different treatment options and prognosis. However, there are some overlaps in clinical presentation and tumor markers among GCTs subtypes, and conventional neuroimaging characteristics are of little diagnostic value for differentiating GCT subtypes. Furthermore biopsy is not widely practiced recently, because anatomically GCTs are located deep and adjacent to some important structures and vessels. In addition the sample is often insufficient to confirm the diagnosis (4). Thus, diagnostic radiation serves as an alternative method to determine the histological type of GCTs (5,6). But side effects and late sequelae induced by radiation therapy (RT) have led to questions on the reliability of diagnostic radiation. Hence we tried to find a non-invasive imaging method to replace the diagnostic radiation for predicting tumor response to RT, so that the treatment strategy could be determined or modified according to radiosensitivity of tumors, rather than just based on histological assessment.

Dynamic contrast-enhanced magnetic resonance imaging (DCE-MRI) is a non-invasive quantitative technique in assessing microvascular permeability, and in distinguishing benign from malignant tumors of the brain, breast, kidney, and sino-nasal (7-9). Recently several studies demonstrated that DCE-MRI data could monitor the early changes in tumor response to therapy, so that it can be used to evaluate tumor response to various treatments before the tumor size appears to change (10-13). Furthermore kinetic parameters derived from DCE-MRI can reflect tumor microenvironment variables, which play an important role in the assessment of tumor response to RT (14). Certain studies evaluated the predictive role of DCE-MRI in assessing tumor response to radiotherapy carried out for the cervix, colorectal, and brain tumors (15-17). However, to date clinical research regarding GCTs’ response to RT is hardly seen. Therefore, our study aims to investigate the changes in pharmacokinetic DCE-MRI parameters in tumor tissue before RT and evaluate the feasibility of DCE-MRI in predicting radiosensitivity of GCTs.

The study was approved by the institutional review board of Beijing Tiantan Hospital and informed consent was obtained from all patients. Thirty-five patients clinically diagnosed with primary CNS GCTs from Jun 2013 to Nov 2014 were recruited in this study. Patients were included if they fulfilled the following inclusion criteria: patients with untreated mass in pineal, basal ganglia, and/or suprasellar region, which were suspiciously diagnosed as GCTs by clinical symptoms, tumor markers, and neuroimaging manifestations; normal or slightly elevated levels of β-human chorionic gonadotropin (β-HCG) in serum and cerebrospinal fluid, and normal levels of α-fetoprotein (AFP). Exclusion criteria were elevated levels of β-HCG, i.e., >1,000 mIU/mL, children younger than 5 years, stereotactic radiotherapy, chemoradiotherapy, or any other MR contraindications.

DCE-MRI was performed using a T1-weighted 3D radial gradient-recalled echo sequence (Volumetric Interpolated Breath-hold Examination, VIBE). The parameters are as follows: TR/TE: 3.86/1.39 ms, flip angle: 12°, slice thickness/gap: 3.0/0 mm, matrix: 256×256, FOV: 220 mm. The acquisition consisted of 50 measurements with a temporal spacing of 4.0 s. Before the dynamic scan, a multiflip-angle approach was performed for T1 mapping. After the fifth phase of dynamic scan, a bolus of gadolinium-diethylene triamine pentacetate acid (Gd-DTPA) (Bellona, Beijing, China) was injected intravenously at a rate of 4 mL/s, a dose of 0.2 mmol/kg of body weight was administered and followed immediately by a 20 mL continuous saline flush.

Of 35 patients suspected for primary CNS GCTs recruited in our study (mean age, 14.2±5.2 years; age range, 8-28 years), 30 were male and 5 were female. Twelve patients were diagnosed as non-responsive or partly responsive to RT and included in the non-responsive group, and 23 were in the responsive group. The two groups were balanced in terms of age, gender, and initial tumor size (P<0.05).

Relationship between DCE-MRI parameters and changes in tumor volume

Table 2 shows the mean values of DCE-MRI parameters of both groups. There was a significant elevation of Ktrans, relative Ktrans, and relative Kep in the responsive group (Figures 1,2), whereas no significant difference was found in Kep, Ve, and relative Ve between the two groups. 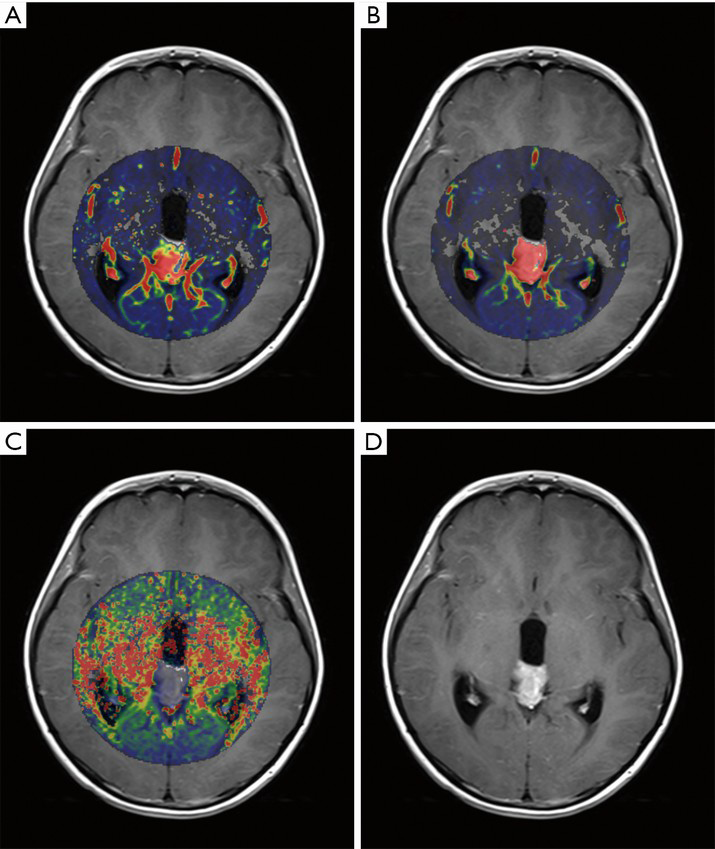 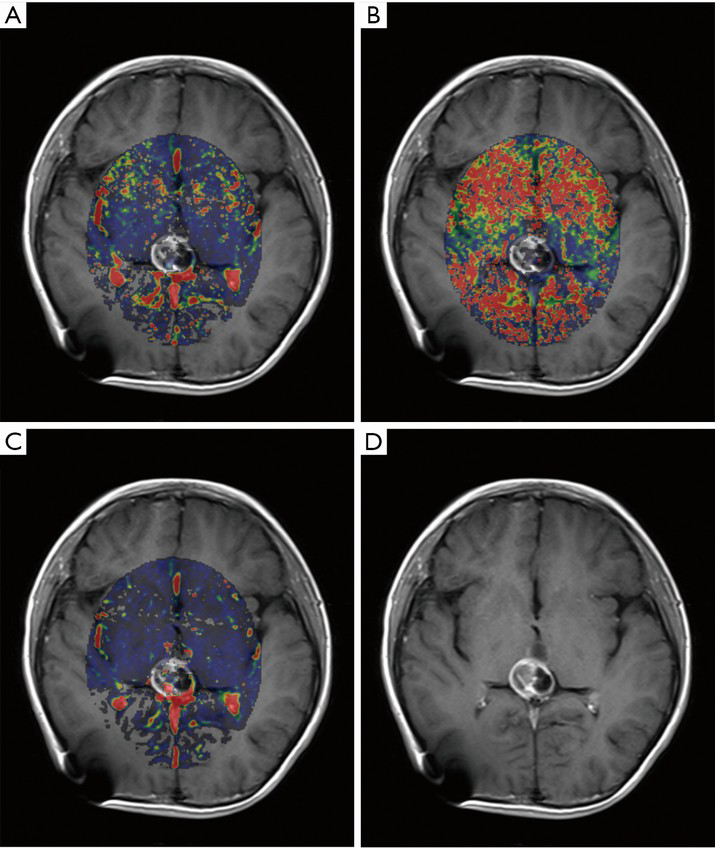 Figure 2 MR images in a 10-year-old male patient with multilocular pineal region mass after ventriculo-peritoneal shunt operation. Marked hypointensities were shown in Ktrans map (A); in Kep map (B); and in Ve map (C) except for slightly patchy hyperintensities in the wall of cyst. Enhanced T1-weighted MRI (D) appeared as honeycomb-like enhancement in the mass. MRI, magnetic resonance imaging. 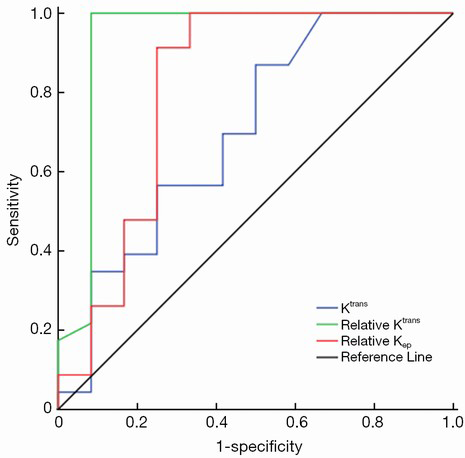 The present study investigates the differences in pharmacokinetic DCE-MRI parameters of normal brain tissue and tumors in patients with CNS GCTs, and demonstrates the efficacy of DCE-MRI in predicting radiosensitivity of CNS GCTs.

Characterized by angiogenesis, solid tumors often have abnormal blood vessel structure, function, and enhanced microvascular permeability. Currently both animal studies (20,21) and clinical studies (7-9) revealed that DCE-MRI is widely used to assess microvascular permeability, which may further contribute to distinguish benign from various solid malignant tumors. However, very little is currently known concerning tumor vasculature of CNS GCTs. In our study, we found that, similar to most solid tumors, tumor tissue of GCTs has a mildly increased Ktrans. It indicates that the increased microvascular permeability of GCTs might be due to the disruption of the blood-brain barrier (BBB). This finding is consistent with previous studies, which proposed that BBB is relevant in patients with metastatic GCTs (22). Furthermore, an elevation of Ve in GCTs corresponds to a relative increase in extravascular extracellular spaces, which implied that GCTs changed in a tumor microenvironment.

Radiosensitivity is an important characteristic of CNS GCTs concerning tumor response to RT. Although optimal management for GCTs remains controversial, RT is well known as a critical component in multi-modal treatment of GCTs and provides favorable outcomes and long-term survival (1,23-25). Thus, prediction of tumor response to RT is a prerequisite for optimal selection of the timing and the field of RT. Kinetic data obtained by DCE-MRI regarding the changes in microvascular permeability and microenvironment can enhance understanding of the underlying mechanism of tumor response to RT (15-17). Although our attempt to analyze the relationship between pharmacokinetic DCE-MRI parameters and changes in tumor volume failed to show any significant correlation, the differences in Ktrans, relative Ktrans, and relative Kep between the responsive and non-responsive groups were significant, which was consistent with the result of Hans’s study (17). They performed DCE-MRI in 31 patients with rectal cancers before chemoradiotherapy, and demonstrated that responsive tumors had higher values of DCE-MRI parameters than non-responsive tumors. This finding indicated that different response of GCTs was caused by pharmacokinetic parameters concerning tumor microvascular permeability.

In addition, we used the cut-off value of Ktrans, relative Ktrans, and relative Kep to stratify GCTs for predicting radiosensitivity. Relative Ktrans showed the best diagnostic value in predicting response with a sensitivity of 100% and specificity of 91.7% by ROC curve analysis. Unlike absolute value, relative pharmacokinetic parameters are more objective and accurate, and can overcome the impact of environment and individual differences. Our study showed that relative Ktrans may be more applicable than absolute value with high sensitivity and specificity. Given methodologic simplicity, noninvasiveness, and wider applicability, we propose that relative Ktrans derived from DCE-MRI should replace diagnostic radiation as a useful and requisite step in the diagnostic procedures.

Our study has some limitations. The response evaluation criteria for diagnostic radiation were inconsistent with the requirement of the Response Evaluation Criteria in Solid Tumors Standard (26). However, previous studies tested the precision and repetition of this diagnostic means using the same criteria (18,23). Moreover, these criteria of diagnostic radiation have been applied in clinical practice for several decades (27). Additionally, owing to low prevalence of GCTs, the sample size of this study is relatively small and the interpretation of the results will be limited.

This study demonstrates that relative Ktrans derived from DCE-MRI is helpful in predicting radiosensitivity of GCTs. It can be used to guide clinical choice of RT and assist in finding new clinical perspective and insight for clinical diagnosis of GCTs. Our results imply that DCE-MRI may replace diagnostic radiation and serve as a novel and reliable approach to assess radiosensitivity of GCTs before treatment and represent a requisite step in the diagnostic procedures.

Funding: This study was supported by Beijing Natural Science Foundation (No. 7122029).