Prostate cancer is the most frequent malignant and heterogeneous neoplasm in males (1). Among its all subtypes, prostatic acinar adenocarcinoma (PAA) is the most common and usually presents asymptomatically with an increased prostate-specific antigen (PSA) or with symptoms only when the patients have locally advanced or metastatic lesions (2). Generally, it is not difficult to make a diagnosis for PAA based on typical histological and cytological characteristics. However, sometimes the diagnosis becomes a challenge because numerous benign or malignant prostatic or non-prostatic lesions and normal structures can be very similar to PAA, especially in a small piece of tissue from transrectal ultrasound (TRUS)-guided needle biopsy or transurethral resection of the prostate, which may lead to an erroneous diagnosis and inappropriate treatment. In the present review, we will focus on these benign mimickers with the purpose of avoiding the potential diagnostic pitfalls.

The atrophy of prostatic gland is a common lesion among the elderly population, although several studies reported that it can also occur in a 20-year-old young man (3-5). So far the etiology of atrophy is largely unknown. It is supposed that prostatic atrophy is caused by age-related physiological changes, nonspecific inflammation, nutrient deficiency, local compression and anemia, hormonal or radiotherapy action, and so on (6,7). According to the classification of genitourinary pathological working group in 2006, the prostatic atrophy is divided into four categories: simple atrophy, cystic atrophy, post-atrophic hyperplasia (PAH) and partial atrophy (8).

Simple or cystic atrophy and PAH usually involve an entire lobule. The size and shape of cells are similar to normal cells, except parts of cells in cystic and dilated glands are flat (Figure 1A). PAH is characterized by a coexistence of atrophic and hyperplastic glands (9). Its typical features are a pile of tightly arranged acini budded from the small atrophic glands. Commonly, PAH does not show local infiltration or confluent glands. The atrophic glands usually arrange in multiple lobules separated by fibrotic stroma. The cells have scant cytoplasm and hyperchromatic nuclei with small and inconspicuous nucleoli (Figure 1B). The basal layer is present but may be discontinuous, which are occasionally confused with PAA. In contrast to PAA, the most atrophic foci show various degrees of inflammatory, intraluminal corpora amylacea, and negative expression of alpha-methylacyl coenzyme A racemase (AMACR), an immunohistochemistry (IHC) marker of prostatic adenocarcinoma. 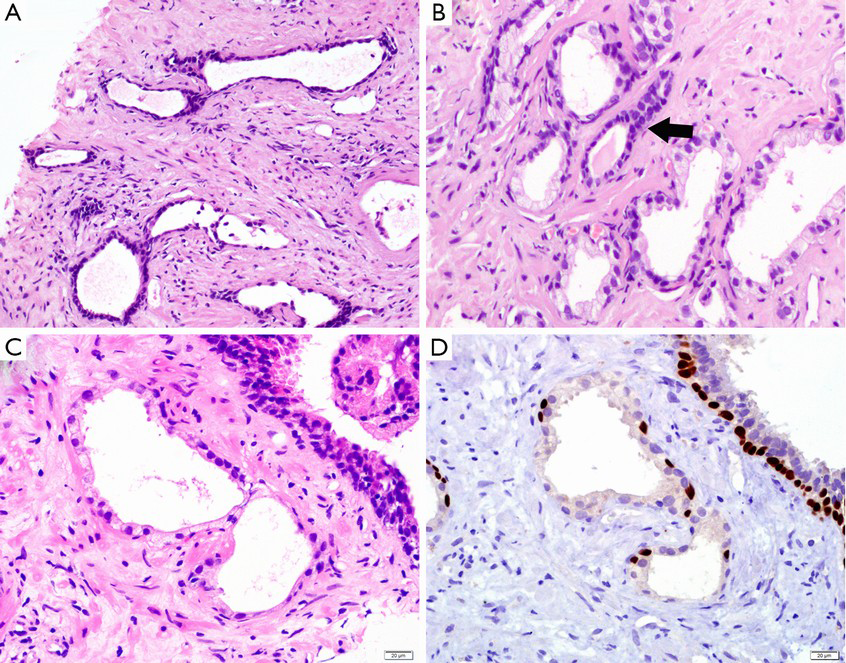 Morphologically, partial atrophy is prone to be misinterpreted as PAA. Unlike aforementioned atrophic subtypes, partial atrophy displays either lobular or diffused growth pattern. The cells usually have relatively scant cytoplasm and irregularly crinkled nuclei without basophilic appearance at low magnification (Figure 1C). Moreover, in around half of cases, basal cells are difficult to be identified or even absent (10). The main differential details of histological changes between partial atrophy and PAA are listed in Table 1. Apart from, it is particularly important to confirm the presence of basal cell layer in the atrophic glands by IHC staining because those basal cells are positive for high molecular weight cytokeratin (HMWCK, clone 34βE12), CK5/6 and p63 markers (Figure 1D). Of note, the glands in partial atrophy may express AMACR, similar to those of PAA and high-grade prostatic intraepithelial neoplasia (HGPIN) (11).

BPH is a very common benign lesion with increasing volume of the prostate. It mainly locates in the transitional and periurethral zone. BPH usually forms large and discrete nodules due to the hyperplasia of both glandular and stromal elements (12). Histologically, the glands vary from small and crowded glands to large glands with cystic dilatation and exhibit complicated growth pattern, including papillary infoldings and branching structure (13). It is worth noting that medium to large glands in BPH may mimic pseudohyperplastic adenocarcinoma, a variant of PAA, especially in the tissues from needle core biopsy. However, the tumor cells of adenocarcinoma usually have malignant nuclear features and the neoplastic glands lack basal cell layer. It is also helpful to identify adenocarcinoma if there is a transition from large atypical glands to typical small acinar adenocarcinoma at low magnification or the presence of luminal crystalloids or blue mucin.

BCH occurs in about 23% of whole prostatic tissues and 10% of peripheral zone by needle core biopsy (14). It is considered to be a kind of nodular hyperplasia, which is associated with the androgen therapy-related atrophy. BCH usually coexists with BPH and presents as well-circumscribed lobules with smooth borders. Conventional BCH ranges from glands with multilayered basal cells to solid basaloid nests. The hyperplastic basal cells have basophilic cytoplasm and bland nuclear features without nucleoli or pleomorphism (Figure 2A,B) (15). It is easy to be distinguished from PAA. However, its rare subtypes, such as florid BCH and atypical BCH, may mimic PAA. Morphologically, florid BCH is an extensive proliferation of basal cells involving more than 100 small crowded acini (per section) and forming a nodule. Atypical BCH is the proliferation of basal cells with prominent nucleoli. In these two subtypes, there are nuclear atypia, intraluminal secretions, intracytoplasmic hyaline globules, or even very few mitoses (15,16). The crowded glands of BCH occasionally display an infiltrative pattern. Despite all this, the solid nests, multilayered cells, calcifications, and cellular fibrous stroma can help us to establish a diagnosis of BCH. Mounting evidence suggest that IHC staining is a useful adjunct to verify hyperplasia of basal cells and demonstrates negative expression of AMACR, PSA and prostatic specific acid phosphatase (PSAP) markers  (Figure 2C) (16,17). 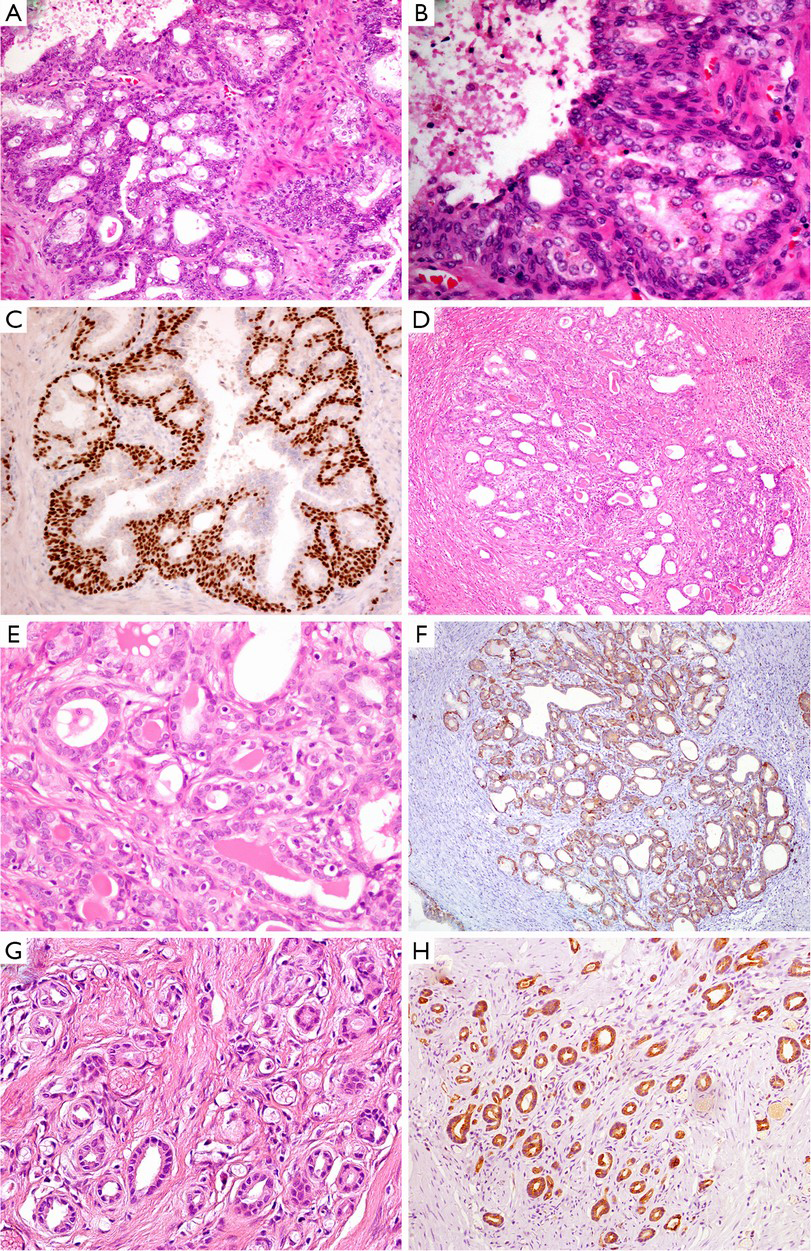 Figure 2 Prostatic hyperplastic lesions. (A) In basal cell hyperplasia, the glands have multilayered basal cells; (B) the cells have basophilic cytoplasm and bland nuclear features without prominent nucleoli; (C) the hyperplasia basal cells are positive for p63 IHC staining; (D) atypical adenomatous hyperplasia is a well-circumscribed lesion with small and crowded glands at low magnification; (E) the glands are small, round and densely packed. There are not enlarged nuclei and prominent nucleoli; (F) IHC staining is positive for 34βE12 and p63; (G) sclerosing adenosis shows the variable sized or shaped glands disorderly embed into prominent sclerotic stroma; (H) the basal cells are positive for 34βE12 in IHC staining. (H&E: A, 200×; B, E&G, 400×; D, 100×. IHC: C&H, 200×; F, 100×). IHC, immunohistochemistry.

CCCH has been regarded as a morphological variant of BPH. It consists of enlarged glands filled with anastomosing clear cells, which form a cribriform growth pattern (18). In many cases, it is common to have the transition from conventional BPH to cribriform hyperplasia with clear cells. CCCH may become a pitfall for high-grade PAA with cribriform pattern. However, the nodular proliferation, bland cytology, cellular fibrous stroma, and the presence of basal cell layer suggest the diagnosis of CCCH (19).

AAH, also called adenosis, belongs to a benign lesion with the proliferation of small acini (20). The incidence of AAH varies from 1.5% to 19.6% in transurethral resections of prostate and radical prostatectomies (21). AAH is easily misdiagnosed as PAA, particularly in a TRUS-guided biopsy of the prostate (22). In detail, AAH is a well-circumscribed lesion with lobular appearance (Figure 2D). The glands are small, round, and densely packed. Some of them merge into larger and complex acini (23). It may have an expansile or minimally infiltrative margin, crystalloids, crowded and disorderly glands, and medium-sized nucleoli (Figure 2E), which resemble to low-grade PAA. Even so, There are not macro nucleoli (>3 µm), blue-tinged mucin and straight luminal borders in AAH, which is the features of PAA (24). AAH can focally express (10% of cases), even diffusely express (7.5% of cases) AMACR (25), it is therefore important to identify that the basal cell layer is preserved, although basal cells usually are discontinuous or focally presence (Figure 2F) (26).

Sclerosing adenosis of prostate is very similar to that of breast. It is a benign lesion with the hyperplasia of both small acini and fibrous stroma. The lesion presents as nodular with well-defined boundary, but without capsule (27). Its histological feature is that the variable sized or shaped glands disorderly embed into prominent sclerotic stroma (Figure 2G). There are both clear secretory cells and amphophilic basal cells in the hyperplastic glands. Besides, some glands are surrounded by a layer of thick and eosinophilic basement membrane-like matter. The cells may have prominent nucleoli and intraluminal acid mucin. Sclerosing adenosis should be distinguished from small acinar adenocarcinoma. In IHC staining, the basal cells are not only positive for HMWCK (e.g., 34βE12, Figure 2H), CK5/6 and p63, but also positive for smooth muscle actin (SMA) and S-100 protein, which suggests those cells have myoepithelial differentiation (28,29).

Mucinous metaplasia usually occurs in the peripheral zone closed to normal glands of the prostate. The glands are lined by tall columnar cells that have rich mucus and small basal nuclei, which is similar to Cowper gland. It is important to recognize mucinous metaplasia in order not to confuse it with intraluminal mucin that is often associated with PAA (30). The metaplastic cells are positive for mucin staining (PAS, mucicarmine, and Alcian blue), and IHC staining of PSA and PSAP.

Nephrogenic adenoma named as adenomatoid or nephrogenic metaplasia, belongs to a kind of metaplastic response of urothelium to injury. It locates in all parts of the urothelium from pelvis to urethral canal (33). Commonly, the lesions display various structural forms including tubular, microcystic or papillary pattern lined by a single layer of cuboidal, hobnail-like or flat cells. Those cells have clear to eosinophilic cytoplasm, round nuclei with fine chromatin (Figure 3A). The glands have prominent peritubular basement membrane. Nephrogenic adenoma is usually accompanied with interstitial edema and chronic inflammation. Sometimes, when small tubules extend into fibromuscular stroma, or focally express of PSA, PSAP and AMACR, or negatively express the markers of basal cell, the misdiagnosis of PAA may be established. In support of nephrogenic adenoma is the positive expression for S100A1, PAX-2 and PAX-8 by IHC staining (Figure 3B) (34,35). The main differential points between nephrogenic adenoma and PAA are summarized in Table 2. 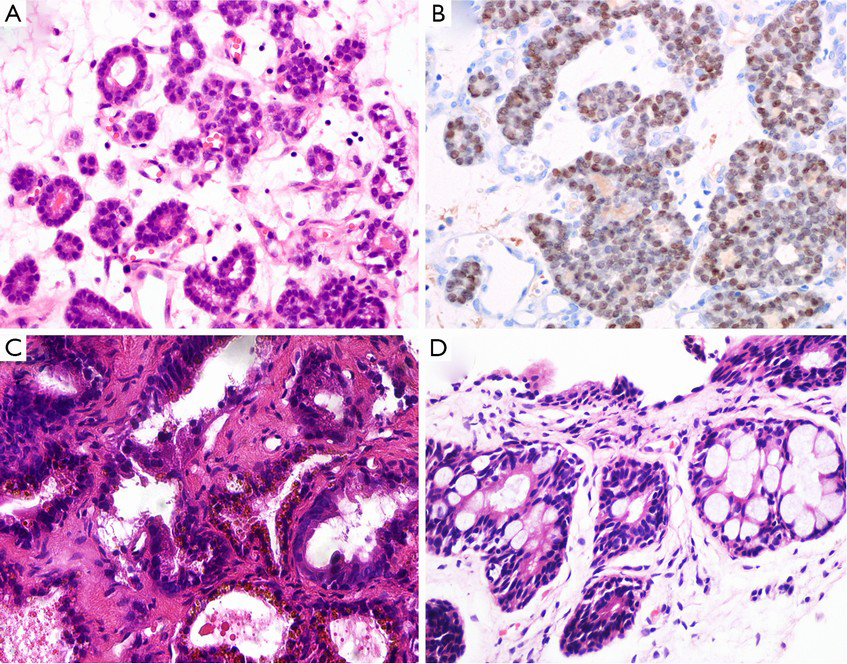 Figure 3 Non-prostatic lesions or structures. (A) Nephrogenic adenoma displays small glands lined by single layer of cells with fine chromatin in an edematous stroma; (B) those cells are positive for PAX-8 IHC stainining; (C) the seminal vesicle displays golden-brown amorphous material (lipofuscin) in the cytoplasm; (D) the distorted and hyperplastic rectal glands may mimic prostatic acinar adenocarcinoma due to blue-tinged mucin secretions and prominent nucleoli. (H&E: A, C&D, 400×; IHC: B, 400×). IHC, immunohistochemistry.

The Wolffian ducts in male fetus develop into a system of connected organs between the efferent ducts of the testis and the prostate, namely epididymis, vas deferens, and seminal vesicle. In adult, the residual of Wolffian ducts is very rare and usually show a lobular structure. Being a diagnostic pitfall, Wolffian ducts display different sized and shaped glands without basal cells, fibrocystic change, papillary hyperplasia, intraluminal eosinophilic secretion, even occasionally an invasive growth pattern. However, the cells of Wolffian ducts are positive for HMWCK, and negative for PSA and PSAP, thus easily reach to a correct diagnosis (36).

Rectal glands are likely to be found in the tissues from TRUS-guided prostatic biopsy (Figure 3D). Some distorted and hyperplastic glands have the similar features with PAA. For example, blue-tinged mucin secretions, extracellular mucin, prominent nucleoli, lack of basal cells, and positive expression of AMACR (38,39). In that situation, a panel of IHC markers including PSAP and PSA should been used to rule out PAA.

In conclusion, a series of benign lesion and normal structures may mimic PAA. It is therefore important to be aware of their existence and to recognize their histological features. It is always a challenge for pathologists to make a correct diagnosis for small numbers of atypical glands in a small tissue from TRUS-guided prostatic biopsy. It is noteworthy that there are various morphological differences between PAA and its benign mimickers. Usually, if the presence of any one of the following features, such as circumferential perineural invasion, glomeruloid formations or collagenous micronodules, the diagnosis of PAA should be established without doubts (40). In addition, the presence of abnormal architectural pattern, nuclear enlargement and hyperchromasia, prominent nucleoli, mitotic figures or apoptosis, amphophilic cytoplasm, blue-tinged mucin or pink amorphous secretions or crystalloids in the lumen, is favored the diagnosis of PAA. Ancillary IHC staining and careful analysis of clinical history can be also helpful to prevent a misdiagnosis and inappropriate therapy.