Many plants have been applied for the treatments of cancers (1). Tand have shown certain therapeutic effects, both in vitro or in vivo (2,3). Anacardic acid (AA) is a mixture of 2-hydroxy-6-alkylbenzoic acid homologs and is commonly found in Anacardiaceae family (4,5). It has been widely recosnized as a non-speciﬁc histone acetyltransferase inhibitor of p300 (6). Meanwhile, it has shown certain anti-tumor activities (7,8) by inhibiting histone acetyltransferase (9-13) and transcriptional factor nuclear factor-κB (14) in cell and animal models. In addition, it may efficiently inhibit the proliferation of breast carcinoma cells (15).

Prostate cancer (Pca) has a high mortality, ranking second only next to lung cancer (16). Androgen is an important biological effector of prostate cancer progression (17). Many studies have demonstrated that phytochemicals can effectively inhibit the apoptosis and proliferation of prostate cancer cells (18-22). Chun et al. reported inhibition of cell viability and apoptosis of Pca cells treated by andrographolide, which is extracted from a medicinal plant (23). Although the anti-tumor activity of AA has been confirmed in numerous cancers including prostate cancer, the mechanisms remain unknown.

In this study, we explored the role of AA for LNCaP cells. In the investigation of the mechanism, we used siRNA against the p300 to inhibit p300 gene in LNCaP cells, and to determine the effects of p300 on other genes closely related to prostate cancer such as AR and p53.

LNCaP was purchased from Yinrun (Changsha, China). LNCaP is a classical metastatic prostate adenocarcinoma cell line, derived from metastatic lymph nodes. LNCaP was cultured with both RPMI 1640 and 10% FBS, and subcultured weekly (37 ℃, 5% CO2).

The Lncap cells were seeded into 6-well plates (4×104-5×104 cells/well) and cultured in 2 mL basic culture medium containing 10% FBS overnight until the cells were 70% confluent. Cells were transiently transfected with a validated scrambled control siRNA, or p300 siRNA by using InterferinTM transfection reagent. The mixture of siRNA and InterferinTM transfection reagent was incubated for 10 min, added to each well of the 6-well plates and incubated at 37 ℃ for 24 h before drug treatment.

Lncap cells were treated with AA or transfected with p300 siRNA before drug treatment. Cells were incubated at various concentrations (0, 5, 25, and 125 μmol/L) at a series of time points (0, 4, 24 and 28 h). Then, 5 mg/mL of MTT solution (10 μL, Yinrun, Changsha, China) was carefully added to each plate well. Then, the LNCaP was cultured for another 4 hours. All media were subsequently discarded, and plates were read at 492 nm (A value) with the addition of 150 μL of DMSO in each well. All tests and determinations were repeated in triplicate. The survival rate was calculated by subtracting the background OD value (complete culture medium without cells) from the OD value from each test well.

LNCaP was incubated in dishes with a density of 1×105/mL. It was incubated with AA at different concentrations (0, 5, 25 and 125 μmol/L) at 30 ℃ and 5% CO2 for 24 hours. The cells were digested with 2.5 g/L trypsase in a shaking bath. Then LNCaP cells were collected by centrifuge (1,500 rpm, 5 min), and re-suspended in 70% ethanol in PBS for 24 h at 4 ℃ for ﬁxation. Afterward they were harvested and ready for analysis of cell cycle by flow cytometer (Becton-Dickinson, Franklin Lakes, NJ).

A detection of apoptosis of LNCaP cell treated by AA was analyzed by determining the ratio of cells with nucleus concentration and fragment. Cells were collected at 24 h following AA treatment at different concentrations (0, 5, 25 and 125 μmol/L), and then suspended in the buffer. During the apoptosis assay, the cells were stained with PI and annexin V-FITC (Invitrogen, Carlsbad, CA) and determined by flow cytometer.

After LNCaP was cultured with AA at different concentrations (0, 5, 25 and 125 μmol/L) for 24 hours, quantification of protein expression (p300, p53, p53-ser15, p21, AR and cyclin D1) was assessed by Western blotting. Cells were harvested and cultured in RIPA buffer (15 min, 4 ℃) before the incubation of lysed products (95 ℃, 5 min). We then detected the protein concentration using DC Protein Assay (Biorad Laboratories, CA). Then, 100 μg protein was loaded on a 12% Acrylamide gel before transferring to membranes, which were blocked by PBS and low-fat milk for 1 hour. The blocked membrane was cultured with primary antibodies (60 min, 20 ℃) and then in the secondary HRP-conjugated antibody (60 min, 20 ℃). Protein expressions were determined by luminol-enhanced chemiluminescence (Thermo Scientific, MA) and exposure to a film (Kodak-Industrie, France). Beta-actin was adopted as intra-reference. 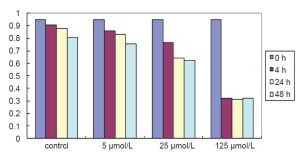 Figure 1 The effects of AA treatment on the proliferation of Lncap cells. MTT assays record the cell growth rate of Lncap cells treated by AA with different dosages and in 4, 24, 48 hours. The best action time is 24 hours and optimal dose 125 μmol/L 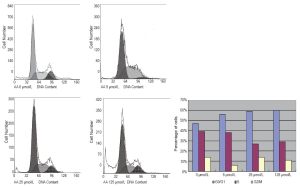 Figure 2 AA induces cell cycle arrest in G1/S phase in Lncap cells. Lncap cells are treated by AA with different dosages (0, 5, 25, 125 μmol/L) and in each group cell cycle alterations are detected using flow cytometry. We fifind the accumulation of cells in the G0/G1 phase and decrease of cells in the S phase (P<0.05)

To investigate whether apoptosis is involved in the influence of AA on LNCaP, we determined the proportion of apoptotic cells using a flow cytometer by double staining of cultures with PI and annexin V-FITC. A sizable increase of apoptosis induced by AA in LNCaP was clearly showed in Figure 3. The proportion of late apoptotic cells at 24 hours following AA incubation increased significantly compared with the control group (P<0.01). 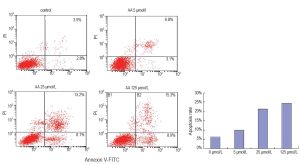 Analysis of the mRNA and proteins in LNCaP cells treated by AA at various concentrations showed a significant decrease of the expression of p300 and AR in a dose-dependent way. In contrast to AA-treated cells, AR expression was observed in untreated LNCaP cells, and AA reduced the expression of AR and PSA of the cells in a dose-dependent manner (Figure 4). To investigate whether the down-regulation of AR expression was associated with p300, Lncap cells were transfected with p300 siRNA before drug treatment. Real-time PCR and Western blot were performed to determine siRNA effectiveness. We have found silencing p300 using its specific siRNA reduced the mRNA and protein expression of AR as well as p300, indicating that down-regulation of AR by AA is associated with the down-regulation of p300 (Figure 5). 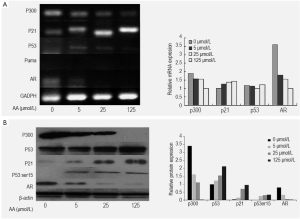 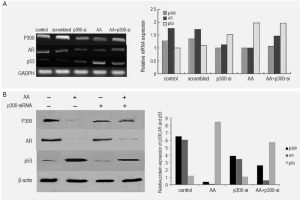 AA up-regulated p53 through phosphorylation of p53 on Ser15

The mainstream therapies for prostate cancer remain surgical and endocrine approaches. AA, a natural plant extracts, is considered to be a promising anti-tumor drug with acceptable toxicity and high anti-tumor spectrum. AA inhibits the proliferation of tumor cells in pituitary adenoma (7), breast cancer (15), pulmonary adenocarcinoma, and oral squamous cell carcinoma (24). In our study, the antiproliferation effect of AA on Lncap cells was obvious. LNCaP cells were treated with AA at 5, 2, and 125 μmol/L for 4, 24, 48 h respectively, the inhibition of cell growth and the apoptosis were all significant. AA arrested LNCaP cells at their G0/G1 phase. S phase LNCaP cells decreased, suggesting that AA may have a role in regulating the G1/S phase check point. Moreover, AA exerted such effect in a dose- and time-dependent manner. The optimal concentration of AA was 125 μmol/L, and the optimal reaction time was from 24 to 48 hours. We attempt to explain the role of AA on Lncap cells from the following two aspects.

It is found that AA induced apoptosis and inhibition of NF-κB. In addition, AA can remarkably suppress the activity of IkBa kinase (24). With varying chain length, AA induces cytotoxicity towards several human cancer cell lines in vitro. AA works as an inhibitor of p300, a general transcriptional coactivator and important acetyltransferase (25). p300 remodels chromatin via histone acetylation, resulting in the exposure of the gene promoter and activation of transcription (26,27). p300 can be abnormally activated as oncogene protein inducing tumor cell differentiation. In our study, AA inhibits p300 through supressing p300 transcription and post-translational modification. The inhibition of activation of p300 and acetylation of histone by AA can make the chromosome more condensed and inhibit the combination of oncogenes and its regulator protein (28).

In our study, AA can also down-regulate AR through supressing p300. Androgen is involved in cell cycle progression at G1/S transition and androgen depletion of LNCaP cells resulted in G1 arrest of the cell cycle with suppression of cyclin D1 expression and CDK4 activity (17). Androgen plays a key role in the development of prostate cancer through AR signaling. Aberrant expression of AR, frequently observed in human prostate cancer, has been linked to prostate cancer progression. p300 is key components of the AR transcriptional complex. AA, an inhibitor of p300, can supress AR and its target genes, which can induce cells cycle arrest and apoptosis of Lncap cells through AR signaling. In our study, the suppression of AR expression induced by AA was blocked by p300 siRNA transfection in LNCaP cells, which may indicate that p300 play a key role in the down-regulation of AR expression induced by AA in LNCaP cells.

In addition, the CH1 region of p300 has ubiquitin ligase activity with p53. p300 has a role in degradation of p53 proteins involving ubiquitin through a mechanism of p300/Mdm2-dependent or not (29). p300 can also directly acetylate p53. However, in our study, AA, as an inhibitor of p300, the role of the activation of p53 through p300/p53 signaling was little. Blocking p300 with p300 siRNA transfection did not block the up-regulation of p53 expression induced by AA. Which may because the activation of p53 was mainly caused by AA-induced phosphorylation of p53 on Ser15 rather than its acetylation. AA directly activates p53 and facilitates the phosphorylation of p53 at Ser15. The enhanced Ser15 can lead to the phosphorylation of Thr18. By suppressing the interaction of p53/mdm2 complex, Thr18 may protect p53 from ubiquitin-mediated degradation, which can stabilize and increase the protein expression of p53. When p53 was activated by AA, it could selectively activate target genes such as p21. The degree of up-regulation of p21 showed noticeable correlation with p53, which may because AA up-regulate p21 through activation of p53. The up-regulation of p21 protein can block the re-replication of DNA, sustain G2 arrest, and induce a G1/S arrest. Furthermore, p53 can directly decrease the likelihood of apoptosis of LNCaP cells by preventing their entry into the S phase.

The interaction between p53 and p300 is complex and controversial. The activation of p53-mediated target gene needs the auxiliary function of p300 and the related histone acetylation, which can enhance the stability of the p53-p300-DNA complexes and the affinity between the regulatory elements that affect gene transcription (30). p53 was also found in a stable complex with p300 by coimmunoprecipitation and gel supershift assay. p300 may act as coactivators of p53. But p53 can also be degraded by the ternary complex (p53/Mdm2/p300). In our experiments, after AA acted on LNCaP cells, the expression of p300 was significantly inhibited compared, whereas the expression of p53 increased. Therefore, AA can disrupt p300/p53 interaction and upregulate the p53.