Report of incidence and mortality in China cancer registries, 2009

Population-based cancer registry collects the data on cancer incident cases and deaths from covered population to describe and surveillance the cancer epidemics in certain areas. The cancer registration data are not only applied for cancer control planning, implementation and evaluation on cancer prevention and control but also for scientific research (1). Since 2006, when Disease Prevention and Control Bureau, Ministry of Health of China started to publish cancer statistics annually, National Central Cancer Registry (NCCR) of China has been responsible for collecting data from all local registries, calculating the statistical items accurately, analyzing the data of cancer incident cases and deaths from registration areas, and then releasing the updated data in Cancer Registry Annual Report (2). The cancer statistics data have been broadly utilized in scientific researches, clinical trials and decision of cancer prevention and control strategies.

Proportion of morphological verification (MV%), percentage of cancer cases identified with death certification only (DCO%), mortality to incidence ratio (M/I), percentage of uncertified cancer (UB%) and percentage of cancer with undefined or unknown primary site (secondary) (O&U%) were used to evaluate the completeness, validity and reliability of cancer registration data. According to NCCR acceptable criterion, the following standards should be reached: MV% higher than 66%, DCO% less than 15% and M/I ratio between 0.6 and 0.8.

One of the advantages of cancer registration data was timely report of cancer. However, for the completeness, validity and reliability of cancer statistics (3), the time gap between data updating and analyzing might exist. NCCR ruled that every registry should upload the cancer registry data of 2009 before July 1, 2012, which was 30 months after cancer diagnosis.

The quality of data was assessed based on “Guideline of Chinese Cancer Registration” and referred to the criteria for “Cancer Incidence in Five Continents Volume IX” (4) by the International Agency for Cancer Registry (IACR), the International Agency for Research on Cancer (IARC). Once the cancer registration data met the criteria of quality on completeness, comparability and validity, it would be accepted as qualified data for analysis.

Crude incidence and mortality rates were calculated stratified by cancer type, sex, area (urban/rural) and age (grouped by 0, 1-4, 5-9, … 80-84, 85 years old and above), age-standardized to the 1982 Chinese population and world Segi’s population. Proportion and cumulative rate were also calculated. Database software, including MS-FoxPro, MS-Excel, SAS and IARC issued by IARC/IACR (5) were used for data check, evaluation and analysis.

Table 1 Distribution for total population, new case and death number in each registry in 2009
Full table 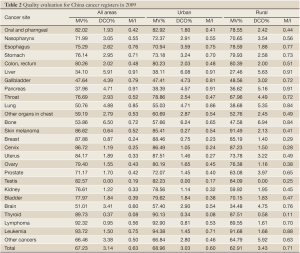 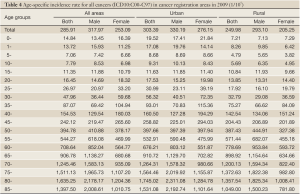 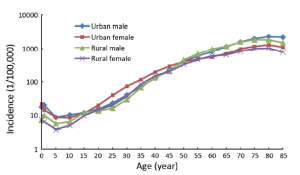 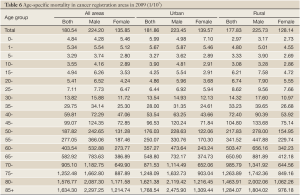 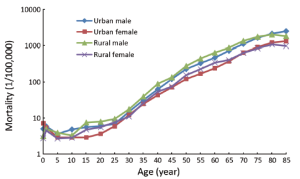 Cancer incidence rates for the 10 most common cancers 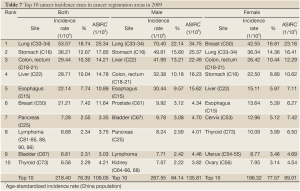 Cancer mortality rates for the 10 most common cancers

In urban areas, lung cancer was the most frequently diagnosed cancers, followed by colorectal cancer, stomach cancer, breast cancer and liver cancer. The 10 most common cancer accounted for 73.93% (82.26% in males and 75.93% in females) of all cancers. The most common sites of cancer were lung, stomach, colon-rectum, liver and esophagus in males, while were breast, lung, colon-rectum, stomach and liver in females (Table 9).

Cancer mortality of the 10 most common cancers in urban areas

Lung cancer was the leading cause of cancer death in urban registration areas for both men and women. The top 10 cancers accounted for 82.38% (86.86% for males and 79.97% for females) of all mortality induced by malignant tumors. Other cancer types with high mortality in men were liver cancer, stomach cancer, colorectal cancer and esophageal cancer. In women, colorectal cancer was the second cause of cancer death, followed by stomach cancer, liver cancer and breast cancer (Table 10)

Table 11 showed the 10 most common cancer incidence rate in rural areas. Stomach cancer was the most frequently diagnosed cancers, followed by lung cancer, esophagus cancer, liver cancer and colorectal cancer. The 10 most common cancers accounted for 84.73% (90.25% in males and 82.71% in females) of all registered new cases. The most common sites of cancer were stomach, lung, esophagus, liver and colon-rectum in males, while were stomach, lung, esophagus, breast and liver cancer in females.

Cancer mortality of the 10 most common cancers in rural areas

Lung cancer was the leading cause of cancer death in rural registration areas for both men and women. The 10 most common cancers of death accounted for 88.76% (92.10% in males and 85.89% in females) of all cancer mortality. The other cancer types with high mortality were liver cancer, stomach cancer, colorectal cancer and esophageal cancer in males, and lung cancer, colorectal cancer, stomach cancer, liver cancer and breast cancer in females (Table 12).

The year of 2009 is the first year launched National Program of Cancer Registry by the Ministry of Health in China. There were 52 new cancer registries established on the basis of existed 43 registries, supported by central finance through the program. According to the requirement of data submission from NCCR, total 95 registries should submit cancer registration data of 2009 in 2012. Till June of 2012, there were 104 cancer registries submitted data, a great increase compared to last year. In the year of 2012, total 222 registries runs cancer registration, covering 200 millions of population, making the recent goal achieved. It is supposed the number of registries is going to increase in the coming years. NCCR would focus on improving data quality, as well as expand the coverage in order to build up cancer surveillance system nationwide laying the foundations for cancer control.

To ensure accepted data valid, NCCR processes the data carefully based on the national criteria issued in program protocol. The incidence, mortality and population have to be reasonable compared with the levels in similar situation, for example, location, socioeconomic status and lifestyle. The indicators of completeness and invalidity, such as MV%, DCO%, M/I ratio, UB% and O&U% were evaluated for every registry’s data. Through the double evaluations in provincial and national level, 72 registries were identified qualified, and 32 were invalid. The valid data were pooled and analyzed to be the final result of annual report in 2009.

The statistics showing cancer incidence and mortality in 2009 were very close to the figures in 2008 (6). Although the included registries were quite different with the ones in last year, the overall incidence and mortality are reasonably stable, indicating that the pooled data was valid and could represent national cancer burden in national level. The representativeness of cancer registry in different groups, such as urban, rural, region, should be evaluated (7).

The cancer patterns are quite different between urban and rural areas in China (8). In urban areas, lung cancer, female breast cancer and colorectal cancer are major cancers with higher incidence rates than in rural areas. However, cancers from digestive system, such as, esophageal cancer, stomach cancer and liver cancer are common cancers in rural areas. Overall cancer incidence in urban areas is higher and mortality is lower than those in rural areas (8,9). The difference is due to limitation of medical resources, relative low level of cancer diagnosis and treatment, and lack of health education in counties. In urban areas, the cancer spectrum is tending to the characteristics of developed countries. The burdens of lung cancer, colorectal cancer and female breast cancer keep increasing. Cancer in rural areas still remains the cancer patterns of developing countries. Thus, the emphasis of cancer control should concern the differences and implement efficient strategies based on the results of cancer surveillance.

So far, Ministry of Health is working on action plan on prevention and control for non-communicable diseases in the twelfth 5 years. Cancer is one of the major diseases seriously threatening people’s health in China. The emphasis in rural areas would focus on professional training in primary care centers, health education/promotion, early diagnosis/treatment, especially, for common cancers in rural areas, such as esophageal cancer, stomach cancer, cervical cancer and liver cancer. In cities, behavioral intervention, such as tobacco control and healthy lifestyle, should be enhanced and cancer screening on high risk groups should be carried out in order to achieve the goal of reducing cancer mortality in the short period.

Disclosure: The authors declare no conflicts of interest.