We studied a consecutive series of 1,637 patients who had undergone gastrectomy for cure of adenocarcinoma of the stomach at the Department of Gastroenterological Surgery, Beijing Cancer Hospital, from December 2004 to December 2009. There were 74 patients with MGC and 107 with SRCC. All patients had absence of preoperative chemotherapy or radiotherapy. A diagnosis of SRCC was made when adenocarcinoma was seen with a predominant component (>50%) of isolated tumor cells contained mucin, and MGC was diagnosed when more than half of the tumor area contained extracellular mucin pools (1). All resected specimens were fixed in 10% formalin solution and embedded in parafﬁn. Microscopic examinations were carried out using serial hematoxylin and eosin stained tissue sections taken through tumor centers.

The patients were evaluated with respect to age, gender, tumor location, tumor size, depth of invasion, lymph node metastasis, distant metastasis, lymphatic vascular invasion, Borrmann type, and TNM stage according to the Union International Cancer Control classification (9). Tumor size was the maximal tumor diameter reported on gross assessment of the tumor on the original pathology report. Surgical procedures were defined as curative when no grossly visible tumor tissue remained after resection, and resection margins were histologically normal (R0 resection). Any procedure that did not satisfy these conditions (R1 or R2 resection) was defined as non-curative. All patients received regular follow-up with physical examinations, laboratory tests, chest X-ray, computed tomography, ultrasonography, and endoscopy. The patient survival was evaluated according to census register certificates or outpatient records.

Data were analyzed statistically using χ2 test. Survival was analyzed using the Kaplan-Meier method. A multivariate analysis of Cox proportional hazards regression model (backward, stepwise) was created to assess the influence of each variable on survival. A P-value of <0.05 was considered statistically significant. 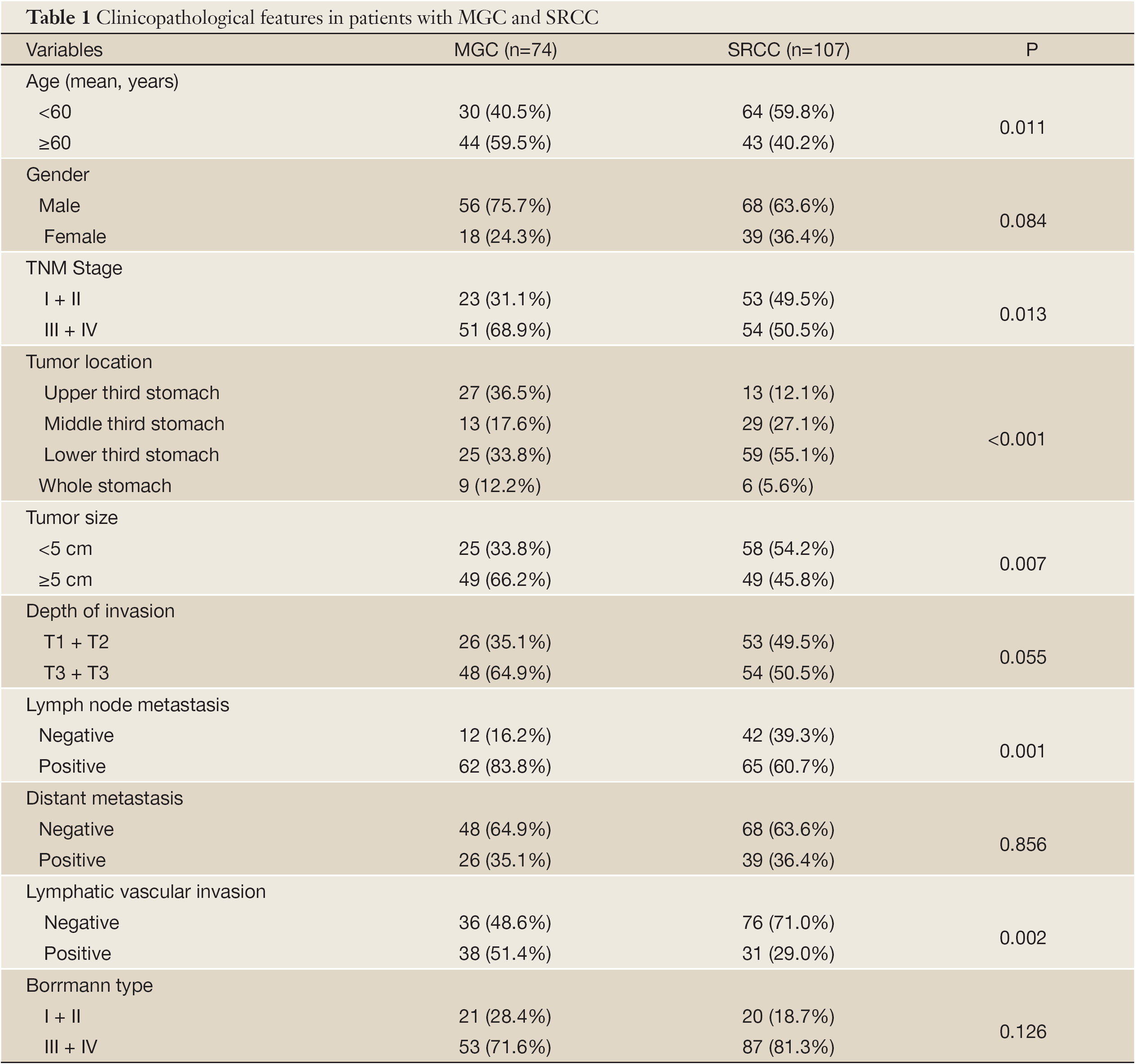 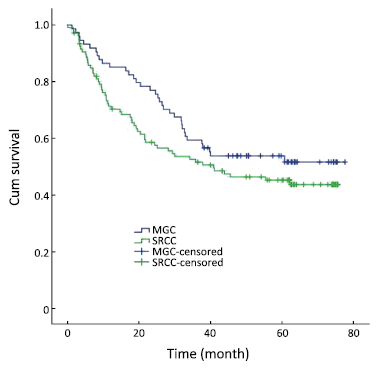 Figure 1 Survival curves for patients with MGC and SRCC. The difference of overall survival rates in patients was not statistically significant (P>0.05)

The survival analysis was stratified by all above clinicopathological features including age, gender, TNM stage, tumor location, tumor size, depth of invasion, lymph node metastasis, distant metastasis, lymphatic vascular invasion and Borrmann type in MGC and SRCC patients, respectively. There was no significant difference in the stratified survival analyses, except the groups of age <60 years, without distant metastasis and tumor localized at upper third stomach. 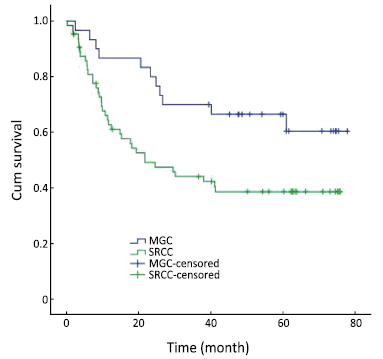 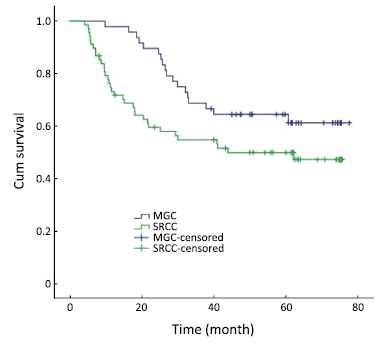 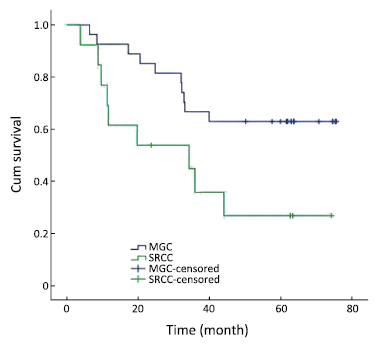 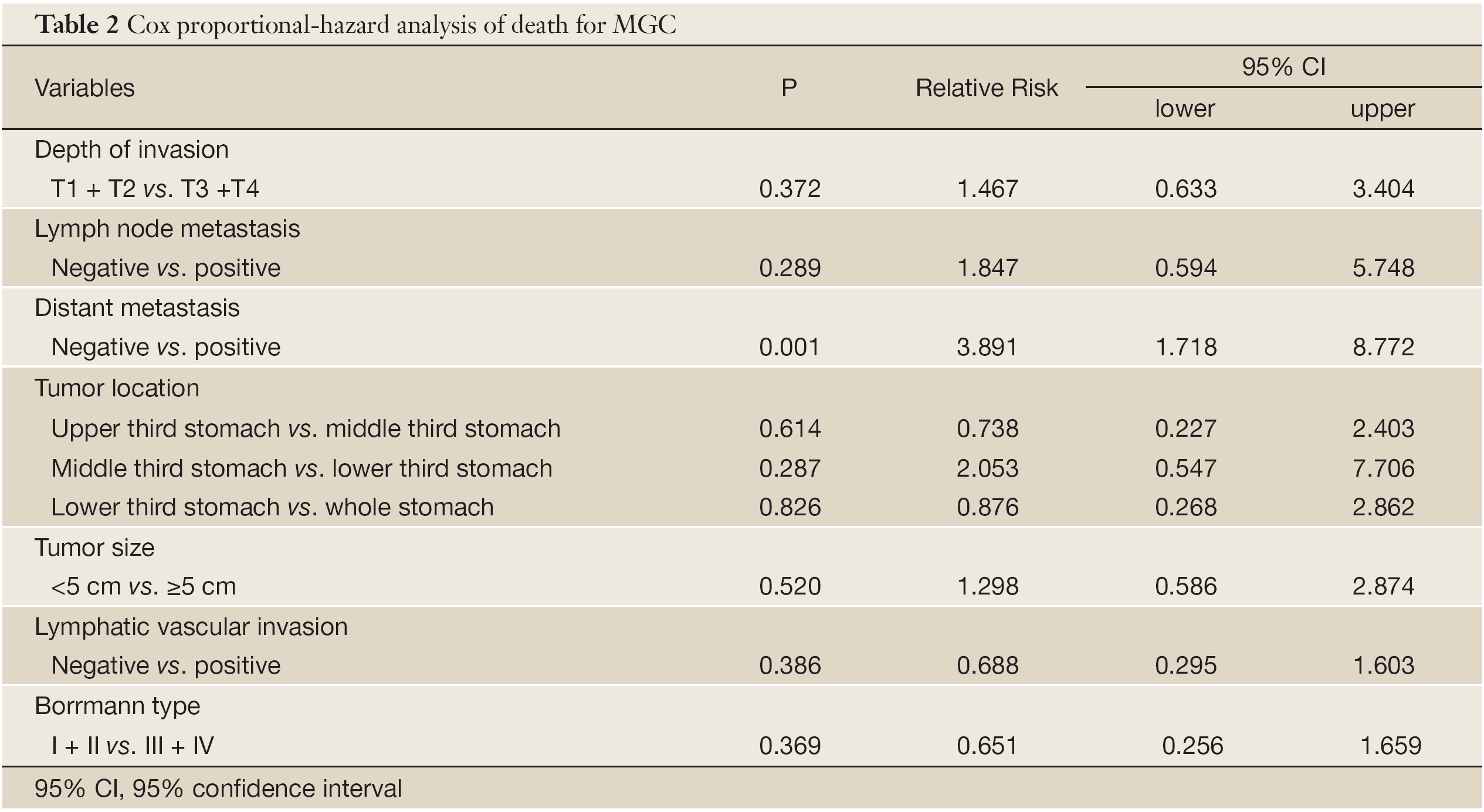 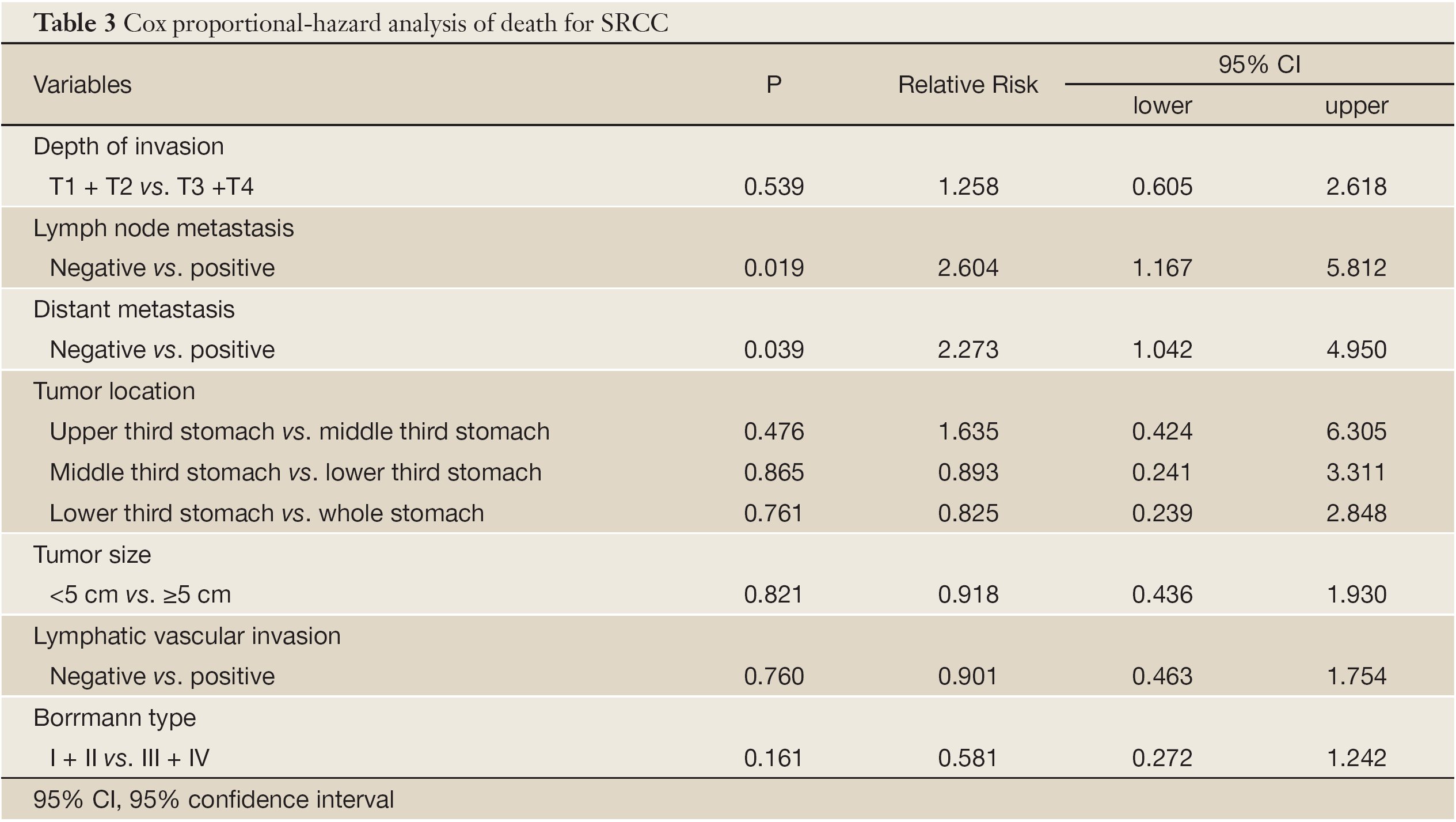 Our data shows that, when compared with SRCC, MGC was featured by senile patients, stage III and IV, upper third stomach, large tumor size, positive lymph node metastasis, and positive lymphatic vascular invasion (P<0.05). Although the overall 5-year survival rate showed no difference between the two groups, the survival rate for MGC patients was significant lower than that for SRCC patients when compared among the age <60 years, negative distant metastasis, and tumor localized at upper third stomach (P<0.05). Our data also showed that distant metastasis is an independent prognostic indicator for both MGC and SRCC. However, there is no statistical significance between MGC and SRCC. That might be the reason that there is no significant difference in the overall survival between them.

Goseki (13) and Martin (14) histological grading system classified gastric cancer according to mucin component and tubular differentiation. These cannot be applied to the current study because all our patients had mucin-rich cancer. SRCC does not form glandular tubules, resulting in the accumulate of mucin in the cytoplasm (13). On the contrary, the glandular tubules in MGC can drain the mucus out of the cancer cells, resulting in the pooling of cancer cells in the mucin (13), which may lead to the loss of cancer cell adhesion. It is well known that abnormal expression of some cell adhesion molecules, such as E-cadherin-catenin complex, is associated with loss of differentiation and increased invasive capacity both in vivo (15) and in vitro (16). Loss of E-cadherin expression occurs during epithelial-to-mesenchymal transition (EMT), which facilitates migration and invasion of epithelial tumor cells. The loss of E-cadherin promotes metastasis (17-19). In gastric cancer, expression loss of E-cadherin was reported to be higher in MGC than in SRCC (20). As a result, loss of cell adhesion might play an important role in the aggressive behavior and poor prognosis in MGC. Similar to the above findings, we found that MGC tends to be with lymph node metastasis and lymphatic vascular invasion. Moreover, the survival rate for MGC patients was significantly lower than that for SRCC patients when there is no distant metastasis, and distant metastasis is the independent prognostic factor for MGC.