microRNAs and ceRNAs: RNA networks in pathogenesis of cancer

microRNAs (miRNAs) are small, evolutionarily conserved, single-stranded RNAs of 18-25 nucleotides in length that play major roles in gene regulation. miRNAs were shown to inhibit their target genes through binding to miRNA response elements (MREs) on the 3' untranslated regions (UTRs) of target RNA transcripts with imperfect complementarity, and leading to decreased expression of their target proteins either by mRNA degradation or translational inhibition (1). Single mRNA usually contains MREs for multiple miRNAs. At the same time, individual miRNA often targets up to 200 transcripts which are diverse in their function. miRNAs have been shown to suppress the expression of important cancer-related genes and have been proved useful in the diagnosis and treatment of cancer (2). However, the mechanism by which the miRNA could be regulated is largely unknown.

Based on the fact that the MREs on the RNA transcripts could be predicted and validated by many types of software and experimental techniques, Salmena et al. hypothesized that all types of RNA transcripts talk to each other by miRNA-mediated language. The previous pattern, “miRNAs→RNAs”, could be replaced by “RNAs→miRNAs→RNAs”. RNA transcripts sharing multiple MREs in their 3' UTRs communicate to each other and regulate the expression levels by competing for a limited pool of miRNAs. The upregulation of a given mRNA leads to the increased total number of MREs, which exceeds their targeting miRNAs. As a result, the targeting miRNAs would be diluted with the derepression of other mRNAs sharing the same MREs. RNAs involved in this process are known as competitive endogenous RNAs (ceRNAs). The large scale identification of ceRNAs constructs ceRNAs regulatory networks (Figure 1) (3,4). 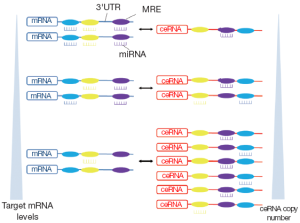 Figure 1 The role of miRNA in ceRNA networks. Multiple RNA transcripts share MREs for the same miRNA in their 3' UTR. Overexpression of ceRNAs increases the concentration of specific MREs and shifts the miRNA pool distribution, consequently, leading to the increased expression of target mRNA

In this system, in addition to conventional function of RNAs to translate to proteins, RNAs may exert another function through their ability to regulate other RNAs (5-8). Furthermore, general studies in gene function usually focus on gene coding regions by overexpression or knocking down of the coding sequence (CDS). The function of UTRs in transcript will be neglected. However, hypothesis of ceRNAs network provides a new understanding on the regulatory function of full transcript including 3' UTR and CDS. The discovery of ceRNAs not only dictates a reevaluation of our understanding of gene regulatory networks but also opens up the possibility of a new biological mechanism that could be targeted by oligonucleotide gene therapy (3).

Methods of Identification of ceRNAs

The identification of ceRNAs depends on the precision of MREs prediction on RNAs, as well as miRNA target prediction (4). miRNAs target prediction algorithms and experimental approaches make it possible to identify MREs related to the RNA-induced silencing complex (RISC). Tay et al. devised a novel approach termed mutually targeted MRE enrichment (MuTaME) to predict the candidate ceRNAs for distinct target. The possibility of putative ceRNAs rank on MuTaME scores generated from the rna22 miRNA target prediction algorithm, which is mainly based on the number of miRNAs with which ceRNAs and target transcripts shared, as well as the distribution of MREs in both ceRNAs and target transcripts (9). Sumazin et al. presented Hermes, a new multivariate analysis method, to analyze candidates according to genome-wide expression profiles of mRNAs and miRNAs from the same tumor samples (10). On the other hand, the novel biochemical techniques, including the argonaute high-throughput sequencing of RNAs isolated by crosslinking immunoprecipitation (Ago HITS-CLIP) and photoactivatable-ribonucleoside-enhanced crosslinking and immunoprecipitation (PAR-CLIP), provide general platforms for identification of ceRNAs, due to restricting the precise sequences for miRNA-mRNA interactions (11).

Condition that ceRNA network may occur

ceRNAs network contains transcripts that share multiple MREs targeted by multiple miRNAs. Thus, whether ceRNAs network has its function largely depends on the concentration of the ceRNAs and their miRNAs. Changes in the ceRNA level need to be large enough to effectively compete for miRNAs binding. Appropriate miRNA level is another important factor impacting ceRNAs network, since there is a balance between ceRNAs and target RNAs for the distribution of miRNAs. In addition, ceRNA networks would also rely on the subcellular distribution and tissue specificity of RNAs and miRNAs existent in a proper cell type at a proper moment (4).

ceRNA association with cancer and its classification

Cancers develop from the accumulation of genomic mutations and epigenetic changes that alter gene function and expression. Accordingly, DNA-based somatic base-pair mutations, changes in DNA copy number, chromosomal translocation, as well as mRNA-based gene fusions, alternative splicing are commonly observed in cancer (12). As a result, such events inducing altered expression of UTRs in transcripts would influence MRE levels, or introduce new MREs into the cells. Changes in MREs of ceRNAs impact the capacity of a proper mRNA transcript to attach or titrate miRNAs. Consequently, the perturbed ceRNA network may contribute to diseases and cancers (4,9,10,13,14). There are three types of transcriptome belonging to ceRNA: protein coding genes, transcribed pseudogenes, and long noncoding RNAs.

The study by Tay et al. identified a series of endogenous protein-coding transcripts, serine incorporator 1 (SERINC1), vesicle-associated membrane protein associated protein A (VAPA), CCR4-NOT transcription complex, subunit 6-like (CNOT6L), as phosphatase and tensin homolog (PTEN) ceRNAs which regulate PTEN levels in a miRNA-dependent manner. Due to the same target miRNAs that PTEN and ceRNAs shared, deletion of ceRNA by siRNAs facilitated more miRNAs contacting with PTEN 3' UTR, and resulted in a significant reduction in PTEN protein levels. Moreover, mutual reciprocal regulation of transcripts in the PTEN ceRNA network is validated by the fact not only that PTEN downregulation modulates ceRNA expression, but also that PTEN ceRNAs are coexpressed with PTEN in human samples (9). Further studies by the same group isolated zinc finger E-box binding homeobox 2 (ZEB2) as a PTEN ceRNA by a Sleeping Beauty insertional mutagenesis screen in oncogenic BRAF-induced mouse model of melanoma. Consistent with other PTEN ceRNAs, ZEB2 levels were commonly reduced and significantly correlated with PTEN in a set of human cancers (13). Recently, it has been reported that 3' UTR of versican could serve as a ceRNA in up-regulating the expression of versican, CD34, and fibronectin, leading to the development of hepatocellular carcinoma by controlling the miRNA activity (15). Furthermore, based on Hermes, a novel bioinformatics multivariate analysis method, Sumazin et al. predicted an extensive miRNA-mediated ceRNA network, including about 7,000 genes, which regulate established oncogenic pathways in glioblastoma (10).

Although pseudogenes share high sequence identity with their ancestral protein coding genes, they are lack of protein-coding ability, due to various genetic disablements including premature stop codes, frameshifts, insertions, or deletions (16). Nevertheless, sequencing efforts have revealed nearly 19,000 pseudogenes in human genome, many of which are transcribed and are often well conserved, suggesting that selective pressure to maintain pseudogenes exists (17).

Previous studies focus on miRNA dependent regulation, also known as “miRNAs→RNAs”. However, the studies by Seitz et al. hypothesized that most miRNA targets regulate the miRNA. Since there is a high homology between pseudogenes and their protein coding partners, numerous miRNA targets identified by computational prediction, especially the transcribed pseudogenes, may actually be competitive inhibitors of miRNA function, preventing miRNAs from binding to their authentic targets by sequestering and titrating them (18). Recently, the research by Poliseno et al. also supported the similar theory that pseudogenes can regulate miRNAs, and influence miRNAs’ availability for other RNAs. They discovered that PTENP1, the pseudogene of tumor suppressor PTEN sharing high sequence homology with PTEN, can compete with PTEN for the same pool of miRNAs through many conserved MREs. As a result, PTENP1 3' UTR overexpression increased both PTEN transcript and protein in a DICER-dependent manner. Moreover, the correlation between PTENP1 and PTEN in normal human tissues, and prostate tumor samples, as well as the direct association between PTENP1 copy number and PTEN expression in colon cancer tissues suggests that PTENP1 transcript levels can regulate PTEN expression, and act as a tumor suppressor gene (19). KRAS and its pseudogene KRAS1P have the similar trend to PTEN and PTENP1. KRAS1P 3' UTR overexpression induced KRAS mRNA abundance. The transcript levels of KRAS and KRAS1P are directly correlated in prostate cancer, neuroblastoma, retinoblastoma and hepatocellular carcimoma, which indicates KRAS1P plays a proto-oncogenic role in cancer and acts as a ceRNA of KRAS for the same pool of miRNAs. Sequence alignment also uncovered that a miRNA binding site, MRE, is conserved in gene and its pseudogene counterpart, as OCT4 and OCT4-pg1-5, FOXO3 and FOXO3B, or E2F3 and E2F3P1 (19).

With the expanding of the number of long noncoding RNAs (lncRNAs), more and more studies pay attention to the role of lncRNAs in diseases. Especially, a subset of lncRNAs is associated with epigenetic mechanisms (20,21). Through the Ago HITS-CLIP technique, a recent Argonaute (Ago)-bound transcripts analysis discovered that lncRNAs are the targets of miRNAs (11,22). Highly up-regulated in liver cancer (HULC) is one of lncRNAs, and plays an important role in tumorigenesis. HULC acts as a ceRNA, which down-regulates a series of miRNAs activities, including miR-372. As a result, the translational level of miR-372 target gene, PRKACB, was derepressed in liver cancer (23). Since noncoding RNAs are not involved in active protein translation process, they are more effective ceRNAs than protein-coding RNAs in miRNAs binding (24).

The perturbations of ceRNA networks could lead to carcinogenesis and other diseases (4,9,10,13,14). However, it provides a new perspective to explain disease processes and offer new opportunities to manipulate ceRNA networks through miRNA competition for cancer therapy. Although the mechanism of ceRNAs needs largely to be explored, the techniques are available to identify MREs on the transcripts, and recognize the related binding miRNAs as the ceRNA language.

With regard to the therapies against miRNA function, many studies found that “miRNA sponges”, the artificial miRNA decoys, which are oligonucleotide constructs with multiple copies of the same MRE in tandem targeting for only one miRNA, have already been used as a RNA-based therapy to deplete individual miRNA in cells and transgenic animals (25-30). In contrast, ceRNAs are “endogenous sponges” which are able to regulate the distribution of miRNAs on their natural targets. Unlike artificial miRNA sponges, ceRNAs contain MREs to combine different miRNAs. Therefore, they could influence the multiple targets containing multiple miRNAs. The application of ceRNA sponges could be an ideal approach for developing therapies against miRNA function (4). Although both miRNA sponges and ceRNA sponges provide strategies for miRNA loss-of-function studies, more study is required to rule out off-target effects and evaluate their potential effects.

Taken together, the identification of the ceRNA mechanism expands the theory of the dynamics and complexity of the miRNA regulatory network and provides more challenge in the development of new strategies for miRNA-based cancer diagnosis and therapy.