Annual report on status of cancer in China, 2010

Population-based cancer registry collects the data on cancer incident cases and deaths from covered population to describe and surveillance the cancer epidemics in certain areas. The cancer registration data are not only applied for cancer control planning, implementation and evaluation on cancer prevention and control but also for scientific research (1). Since 2006, when Disease Prevention and Control Bureau, Health and Family Planning Commission of China started to publish cancer statistics annually, National Central Cancer Registry (NCCR) of China has been responsible for collecting data from all local registries, calculating the statistical items accurately, and analyzing the data of cancer incident cases and deaths from registration areas, then released the updated data in Cancer Registry Annual Report (2). The cancer statistic data have been broadly utilized in scientific researches, clinical trials and decision of cancer prevention and control strategies.

Submitted data were checked and evaluated by NCCR based on “Guideline for Chinese Cancer Registration” and referring to relevant data quality criterion of “Cancer Incidence in Five Continents Volume IX” by International Agency for Research on Cancer/International Association of Cancer Registries (IARC/IACR) (3). Proportion of MV%, percentage of cancer cases identified with DCO%, M/I, percentage of uncertified cancer (UB%) and percentage of cancer with undefined or unknown primary site (secondary) (O&U%) were used to evaluate the completeness, validity and reliability of cancer statistics.

Cancer incident cases and deaths were stratified by areas (urban/rural), region (eastern, middle, western), cancer type, sex (male, female), and age (grouped by 0, 1-4, 5-9, …, 80-84, 85 years old and above). Age-specific rate was used for estimates of incidence and death in 2010. Crude incidence rate, mortality, proportion and cumulative rate were calculated using the national population in 2010. The 2000 Chinese census population and world Segi’s population were applied for the calculation of age-standardized rates. Database software, including MS-FoxPro, MS-Excel, SAS and IARCcrgTools issued by IARC/IACR (4), were used for data check, evaluation and calculation. 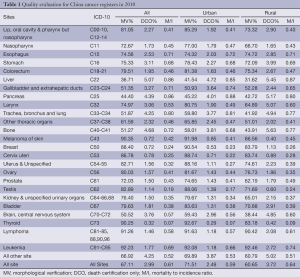 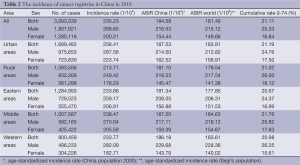 Cancer incidence was relatively lower before 39 years old, then increased dramatically after 40 years old, and finally peaked after 80 years and then slightly decreased after 85 years (Table 3, Figure 1). The pattern was similar between urban and rural areas. Comparing the age-specific incidence rate between urban and rural areas, except age from 55-64 years, urban had higher incidence rates in most of age groups. Group of 80 years was higher in urban areas than in rural areas, but lower in the age-group of 40-74 years. Before age of 70 years, most age groups of males in rural had higher incidence rate than that in urban. However, in females, the incidences were higher in urban than that in rural areas in every age group after 25 years (Table 3, Figure 1). 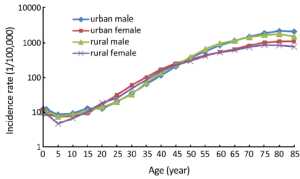 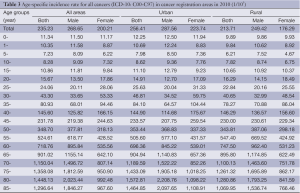 It was estimated there were 1,956,622 died from cancer in 2010. The crude mortality of all cancers in China was 148.81/100,000 (186.37/100,000 in males and 109.42/100,000 in females). The age-standardized mortalities were 113.92/100,000 and 112.86/100,000 by Chinese population (ASMRC) and World population (ASMRW), respectively. Among the patients aged 0-74 years, the cumulative incidence rate was 12.78%. The crude cancer incidence rate and age-standardized rates in urban areas were higher than that in rural areas. The crude cancer mortalities were higher in urban than in rural. However, after adjusted by age, mortalities were conversed both in males and females. More cancer deaths occurred in eastern areas than middle areas and western areas, however, western areas had higher mortalities than eastern and middle areas (Table 4). 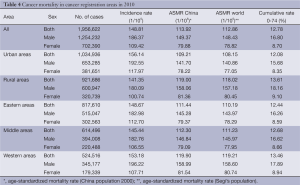 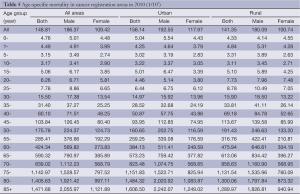 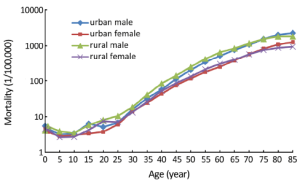 Cancer incidence of the ten most common cancers

Cancer death of the ten most common cancers

Cancer incidence of the ten most common cancers in urban areas

In urban areas, lung cancer was the most frequently diagnosed cancer, followed by female breast cancer, stomach cancer, colorectal cancer and liver cancer with the estimated new cases of 348,107, 127,707, 193,832, 176,942, and 166,166, respectively. The most common sites of cancer were lung, stomach, liver, colon-rectum and esophagus in males, while were breast, lung, colon-rectum, stomach and liver in females (Table 8).

Lung cancer was the leading cause of cancer death in urban areas for both men and women with number of deaths and mortalities of 192,438, 56.72/100,000, 87,481, 27.04/100,000, respectively. Other cancer types with high mortality in men were liver cancer, stomach cancer, esophageal cancer and colorectal cancer. In women, stomach cancer was the second cause of cancer death, followed by liver cancer, colorectal cancer and breast cancer (Table 9).

Cancer incidence of the ten most common cancers in rural areas

Table 10 shows the ten most common cancer incidence rates in rural areas. Lung cancer had been becoming the most frequently diagnosed cancer (257,839 new cases with incidence rate of 39.54/100,000), followed by stomach cancer, liver cancer, esophagus cancer and female breast cancer. The most common sites of cancer in men were lung, stomach, liver, esophagus and colon-rectum, while in women, were breast, lung, stomach, esophagus and liver.

In 2010, the program registries covered by the National Program of Cancer Registry were 193. When NCCR called for data submission, total 219 registries reported registration data including voluntary registries. The population coverage of these registries was over 200 millions, accounted for 15% of national populations. A couple of registries are established every year under financial support from national program. In 2013, the number of registries has been increased to about 250. IARC/IACR recently released the new version of “Cancer Incidence in Five Continents, Volume X” (http://ci5.iarc.fr/CI5-X/ci5-X.htm). There were 12 registries from mainland China accepted for the publication.

In order to ensure the quality of registration data, NCCR processes the data based on the national criteria issued in program protocol. The incidence, mortality and population have to keep reasonable levels compared to past data and similar areas. If unexplicable, data would be sent back to registries to check. The indicators of completeness, comparability and invalidity, such as, MV%, DCO%, M/I ratio, UB% and O&U% were evaluated for each registry’s data to judge if submitted data are valid or not. Through the double evaluations in provincial and national level, 154 registries were qualified and accepted for final database. The valid data were pooled and analyzed for cancer statistics in 2010. This is the first time that cancer incident new cases and cancer deaths were estimated based on the available data making results more practical.

The results showed the estimated cancer incident cases were 3.09 millions and 1.96 cancer deaths in 2010 with the incidence rate of 235.23/100,000 and mortality of 148.81/100,000. Compared to the figures in 2009, both incidence and mortality were slightly lower (5). The reason of the decrease might be the dramatic increase of coverage of population. However, the cancer spectrum was as same as that in the previous year. In this study, the data were stratified by areas (eastern, middle, and western) and it was found that the incidence and mortality were not quite different for overall cancers. Although the number of registries has been double than in 2009, coverage in western areas was still so limited and the representativeness was needed to be evaluated (6).

Urban China had a higher cancer incidence and lower mortality than rural and the cancer patterns are quite different (7,8). It hints different cancer control strategies should be implemented according to different cancer statistics. Lung cancer becomes the most common cancer and the leading cancer death both in urban and rural areas, and especially, in rural, it has replaced liver cancer or stomach cancer as the first killer before. Recently, IARC published an updated issue about air pollution and cancer to firstly identify air pollution is strongly associated with cancer. It was estimated that more than half of the lung cancer deaths are attributable to ambient fine particles in China (http://www.iarc.fr/en/publications/books/sp161/index.php). However, the etiology of lung cancer in rural should be emphasized. Same as lung cancer, breast cancer has become the most common cancer in women in rural areas. The changes of lifestyle, diet and environment have impacted on both urban and rural women.

China is facing critical health issues caused by cancer with over 3 million new cases and nearly 2 million cancer deaths annually. Risk factors, such as air pollution, infection, and changes of diet habit and lifestyle, maintain high level in Chinese, so that, the cancer burden is getting serious. Cancer control strategies, including health education, health promotion, early detection and cancer screening, should be treated as priority in public health. As the fundamental work, cancer registration plays an important role on cancer control and should be emphasized.