The skin is a rare metastatic site for internal malignancies. According to a Taiwanese medical center, cutaneous metastases were found in only 1.02% of patients with internal malignancies and 1.78% of lung cancers metastasized to the skin (1). It has been demonstrated that epidermal growth factor receptor (EGFR) tyrosine kinase inhibitor (TKI), gefitinib, has a consistent clinical benefit in lung adenocarcinoma patients of Asian ethnicity (2). However, favorable responses of these metastatic skin lesions following treatment with gefitinib have rarely been reported. Here, we present a case of lung adenocarcinoma with multiple skin lesions as the first clinical manifestation, which showed complete response to treatment with gefitinib.

A 56-year-old man, a non-smoker with no past medical or surgical illnesses, presented at the Dermatology Department with multiple nodules over the trunk and all four limbs for four months. The lesions were asymptomatic and their size had increased gradually since their first appearance. There was no family history of skin lesions or malignancies. On physical examination, multiple, firm, flesh-colored 0.5-3.5 cm nodules were observed over the chest, abdomen, back, axillary, and all extremities (Figure 1). The initial diagnosis of this patient at the Dermatology Department was steatocystoma multiplex. 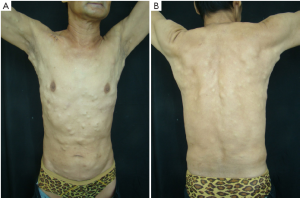 Figure 1 Multiple, firm, flesh-colored nodules over the chest, abdomen, back, axillary, and all extremities.

The patient received one course of cisplatin-based combination chemotherapy. The skin lesions remained stable during the treatment. The subsequent gene test report revealed an EGFR-activating mutation at L858R. The patient was treated with the TKI gefitinib thereafter. The skin lesions disappeared almost completely two weeks after the TKI target therapy (Figure 4). The primary lesion on the left upper lung also regressed substantially (Figure 2B). Currently, the patient is still being treated with gefitinib and his performance status is good. 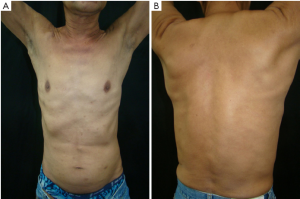 A retrospective study of 7,316 cancer patients found that skin involvement was the first sign of cancer in less than 1% of the patients (3). If there is no other clinical sign or symptom and no tissue biopsy, diagnosis for these patients will usually be delayed. The literature shows that 1-12% of lung cancer patients experience tumor spread to the skin (4), which is the main cause of skin metastases in men and the second cause in women, except the breast cancer. Metastatic skin cancer is almost found previously or simultaneously with the diagnosis of the primary tumor (5).

The scalp, chest, back, and abdominal regions are favored sites, and the upper or lower limbs are rarely involved (6). At present, there are few reports of lung cancer patients with skin lesions involving the chest, back, abdomen, and all four limbs, at the same time, as described here. Steatocystoma multiplex is an uncommon skin disorder characterized by the development of multiple asymptomatic, variably-sized cysts. The disease is genetically transmitted in an autosomal dominant fashion; however, sporadic cases have also been reported (7,8). The condition manifests at a young age and usually occurs on the trunk and proximal extremities. In our patient, the clinical appearance and distribution were similar to that of steatocystoma multiplex, except for the age of onset. Therefore, tissue biopsy should be considered for unexplained fresh skin lesions to rule out the involvement of internal malignancies.

Both Western and Asian authors have reported that, in terms of lung cancer, adenocarcinoma has the greatest tendency to metastasize to the skin, followed by squamous cell carcinoma and small cell carcinoma (1,9). However, some Japanese studies have showed that large cell carcinoma was the most common histology (10). The majority of the authors found that, breast and lung cancers exhibited the highest rates of skin metastases (1,11). It is therefore reasonable to first attempt to rule out primary cancer from these two sites in patients suspected of having cutaneous metastases from an internal malignancy. Lung cancer is characterized by a mixture of histological subtypes, and most importantly, different subtypes that require specific treatments. For example, lung cancer patients with adenocarcinoma had statistically superior overall survival when treated with pemetrexed or gefitinib (patients with EGFR mutations), in comparison to patients with squamous cell carcinoma (12). Furthermore, patients with squamous cell histology should be excluded from treatment with bevacizumab, an angiogenesis inhibitor, because of the risk of life-threatening hemoptysis (13). Therefore, if a tumor biopsy from the primary sites is not possible, immunohistochemistry is extremely essential for determining the representative origin of the cutaneous metastatic lesions. In adenocarcinoma, the TTF-1 expression is characteristic of primary lung cancer, and CDX2 positivity is indicative of gastrointestinal cancers (14). Both positive CK5/6 and P63 expression are highly predictive of a primary tumor of squamous epithelial origin (15). Cutaneous metastasis of neuroendocrine small cell carcinoma can be diagnosed by three commonly used markers: chromogranin A, neuron specific enolase, and synaptophysin. In this case, immunohistochemistry was positive for TTF-1 and negative for CK5/6, compatible with the diagnosis of lung adenocarcinoma. A simple CXR confirmed the primary pulmonary lesion.

The presence of skin metastases in lung cancer indicates a detrimental prognosis. Median survival after skin involvement is approximately four months (16). In this case, where there were multiple cutaneous lesions and associated internal metastases, chemotherapy was the primary option. Chemotherapy with a regimen of cisplatin, gemcitabine, pemetrexed, cyclophosphamide, adriamycin, etoposide, vincristine, and carboplatin has been reported (9,10). However, response to chemotherapy is generally poor in such cases, and the response of the metastatic cutaneous lesions may not correlate to the response at the primary site because of the relatively poor blood supply to the skin. We have not yet observed a complete response at the cutaneous metastatic site with chemotherapy alone.

Gefitinib is an oral agent that inhibits the tyrosine kinase activity of EGFR and for which a higher response rate has been recorded among Asian female patients with adenocarcinoma who have never smoked and who carry an EGFR mutation. Different studies have reported that the EGFR mutation rate in Taiwanese is between 30% and 60%. Chou et al. studied 54 Taiwanese with advanced non-small cell lung carcinoma (NSCLC) treated with gefitinib and reported that the presence of EGFR mutations was the only independent predictor for disease control and tumor response in multivariate analysis (17). Many studies have reported that the most common types of EGFR mutation are in-frame exon 19 deletion and exon 21 L858R point mutation (16), and that there is no statistical difference in the overall response rate between these two mutations. In our patient, the mutation type was L858R and the primary tumor associated with the skin metastases disappeared within two weeks of gefitinib treatment. The induction of tumor regression in NSCLC patients with different sites of internal metastases, including the brain, with gefitinib has been extensively reported; however, reports of good responses of metastatic skin lesions with gefitinib are rare. Most authors attribute the poor chemotherapy responses of skin lesions to the relatively deprived blood circulation in the cutaneous region. However, the most common adverse effect of EGFR inhibitors such as cetuximab and erlotinib is mild to moderate skin rash. Data from many studies show that the severity of the rash is correlated with patient response rate and survival. A mechanism inducing skin toxicity possibly underlies the ability of gefitinib to treat NSCLC patients with skin metastases.

In conclusion, immunohistochemistry is vital in determining the primary origin of cutaneous metastatic lesions. Gefitinib should be considered as the first-line therapy in EGFR mutation-positive NSCLC patients with skin metastases, who usually respond poorly to traditional chemotherapy.