Erythropoiesis-stimulating agents in the management of cancer patients with anemia: a meta-analysis

Anemia is a common feature in cancer patients due to the malignant nature of the disease and/or the cytotoxic effects of chemotherapy on hematopoietic cells (1-3). Management of cancer-associated anemia is one of the key issues for improving life quality and reducing morbidity of cancer patients (4). Red blood cell (RBC) transfusion and erythropoiesis-stimulating agents (ESAs) are two major alternatives in the management of anemia. Collective evidence demonstrated that ESAs could increase hemoglobin (Hb) concentration and reduce the frequency of RBC transfusion (5-7). However, severe adverse events such as venous thromboemblism (VTE), cancer progression and even increased mortality, have been associated with the use of ESAs in cancer patients in some studies (8-12). Bohlius and Tonia analyzed all published randomized controlled trials and found that patients receiving ESAs are at higher risk to develop VTE, hypertension, and lower overall survival (13). Increased severe adverse events, however, have not been documented by all relevant studies, particularly those with a relatively low target Hb (14).

At present, there are no well-defined guidelines for the clinicians to follow regarding when to initiate and discontinue the ESA treatment in anemic cancer patients. The 2012 updated National Comprehensive Cancer Network (NCCN) guidelines for cancer- and chemotherapy-induced anemia recommended that cancer patients with Hb <11 g/dL or decreased by more than 2 g/dL from baseline should be treated with ESAs to maintain Hb at a level sufficient to avoid RBC transfusion (6).

In some of the published clinical trials, ESAs were offered when baseline Hb value was higher than 11 g/dL, and discontinued until Hb reached at a value higher than 13 g/dL (15-17). One such study found association between ESAs with reduced survival and increased mortality (17). However, a meta-analysis of randomized controlled trials comparing the use of ESAs versus placebo in cancer patients with chemotherapy-associated anemia (Hb <11 g/dL) did not find a higher mortality rate in the patients treated with ESAs (18). These results suggested that the starting Hb and target Hb are curial factors that determine potential benefits and risks of ESA treatment for cancer patients with anemia.

All trials in this meta-analysis compared an ESA (epoetin alfa, epoetin beta, epoetin theta, darbepoetin alfa, or recombinant erythropoietin) with a placebo. All trials were conducted in patients with cancer- or chemotherapy-associated anemia. Trials must report one or more of the following measures: Hb response, transfusion rate, quality of life, VTE, accumulated adverse events and on-study mortality (death rate during the study period that may include a period of treatment and a short period after the treatment ended). Non-English papers were excluded from this study.

Based on the 2012 NCCN cancer- and chemotherapy-induced anemia management guidelines (6), the inclusion criteria were set to include the following:

Patients with any primary hematologic disorders that would cause anemia, uncontrolled severe hypertension and those receiving concomitant radiotherapy were excluded from this study.

The investigators wrote a protocol and carried out a comprehensive search of Medline, PubMed, Embase, and the Cochrane Center Register of Controlled Trials from January 1990 to March 2013. In addition, reference lists of the trials, meta-analysis and relevant review articles were examined for any other eligible trials. A manual search of the reference lists of the initially identified articles and the abstracts presented at relevant scientific meetings was also conducted. During the searching, the terms “erythropoietin”, “recombinant human erythropoietin”, “epoetin alfa (alpha)”, “epoetin beta”, “epoetin delta”, “epoetin theta”, “darbepoetin alfa (alpha)”, “Procrit”, “Aranesp”, “NeoRecormon”, “rHu-EPO”, “an(a)emia”, “an(a)emic”, “quality of life”, “cancer”, “chemotherapy”, “platinum”, “non-platinum” were applied.

We used the Jadad score (maximum number of points is 5) to assess the quality of the selected studies (19). The score was 5 for three studies, 4 for three studies and 2 for the remaining two studies.

The analysis was carried out using Review Manager 5.1. A P value of <0.05 was considered as statistically significant. The data of Hb response, RBC transfusion, on-study mortality, VTE and accumulated adverse events were extracted from each study and combined using the Mantel and Haenszel Method to calculate the pooled odds ratio (OR). The ORs reflected the treatment effects. A pooled OR >1 indicated higher hematological response in the ESA arm, and higher transfusion rate, on-study mortality and serious adverse reactions in the control arm. In order to identify the difference of on-study mortality in different targeted Hb levels, additional subgroup analyses were performed.

Cochran’s Q test (Chi-square χ2 test) and I2 test were used to assess heterogeneity. I2 was calculated from a typical meta-analysis as I2=100%×(Q−df)/Q, where Q is Cochran’s heterogeneity statistic and df is degree of freedom. P>0.01 and I2 <25% were considered as no or low-level heterogeneity (20). I2 >50% was considered as significant heterogeneity; upon such cases, subgroup analysis was carried out by excluding one trial at a time.

Publication bias was assessed visually using a funnel plot (21). It is used primarily as a visual aid to detecting bias or systematic heterogeneity in meta-analysis. A symmetric inverted funnel shape arises from a ‘well-behaved’ data set, in which publication bias is unlikely, while an asymmetric funnel indicates a relationship between treatment effect and study size (Figure 2). 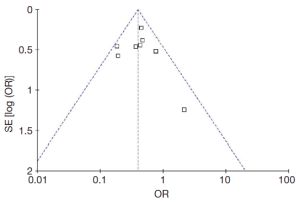 The initial search identified a total of 1,569 abstracts. Among them, 1,466 trials were excluded from the final analysis for the following reasons: inconsistency with the primary goal of this study (n=1,297), duplicate publication of the same study subjects (n=163), and un-available full text (n=6). In addition, 39 trials with baseline Hb at more than 11 g/L and 56 trials with target Hb at more than 13 g/L were excluded. The final meta-analysis included eight clinical trials (n=2,387) (Figure 1). Among the eight trials (22-29), one trial included two treatment arms (25), one compared recombinant erythropoietin (treatment arm) with placebo (n=100) (22), three compared darbepoetin alfa (treatment arm) with placebo (n=1,588) (23,24,29) and four compared epoetin (treatment arm) with placebo (n=699) (25-28). Three out the eight trials were conducted in patients with solid tumors, one in patients with hematological malignancies, and four in mixed patients with either solid or hematological malignancies. The patients in the trials received chemotherapy either before the recruitment or during the treatment period. Brief information of the eight included studies is summarized in Table 1. 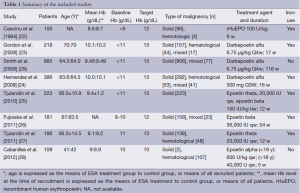 The quality of life did not differ significantly between the two groups (Table 2).

Anemia is one of the frequent complications in 30-90% of cancer patients (30). Anemia affects the quality life of the patients, and is also associated with increased morbidity and mortality (31). Currently, RBC transfusion and ESAs are routine approaches to treat anemia. However, several clinical trials suggested that ESA may be harmful for the patients if not used properly (17,32).

Major concerns of ESA use include possible cancer progression, increased risk of VTE and increased mortality (14,32). In a meta analysis of 20,102 patients, Tonia et al. concluded that ESA treatment significantly increases mortality during the active study period and decreases overall survival (14). VTE and mortality rate have been reported to increase in patients receiving ESA treatment irrespective of the forms of ESAs as compared to RBC transfusion alone (32). However, a number of studies reached distinct conclusion that ESAs does not significantly affect mortality and cancer progression (33-35).

In the present study, we performed a meta-analysis of eight published trials that compared ESA vs. placebo in cancer patients with baseline Hb at less than 11 g/dL and target Hb at no more than 13 g/dL. The results (Figures 3,4,5,6,7) indicated that ESAs could increase Hb levels and reduce the frequency of RBC transfusion in anemic cancer patients, with no change in on-study mortality, VTE, as well as accumulated adverse events. We believed that such findings could be partly attributed to reduced total ESA dosage and lower target Hb (18,36).

In previous clinical trials showing decreased survival in anemic cancer patients receiving ESAs, patient population was typically not well stratified. For example, the cause of death varies considerably (31,37,38). Also, different forms of erythropoietin might also have distinct biological properties and safety profile (39-41). In line with this notion, one study reported lower two-year survival in darbepoetin alpha treatment group vs. in the controls (35.7% vs. 48.8%) (29). Interestingly, another study concluded that epoetin beta application in anemic cancer patients improved one-year overall survival (42).

Erythropoietin binds to erythropoietin receptor (EPO-R), stimulates proliferation, prevents apoptosis, and induces differentiation of RBC precursors (43). Recent studies of EPO-R mRNA or protein expression in a range of cancer cell lines indicated that ESA could affect cancer cell biology (44,45). Presumably, EPO-R expression may vary among cancer cells of different tissue origins or types. It is conceivable that the benefits vs. risks of ESAs vary among patients with different types of cancers. Therefore, more studies with carefully defined study sample are needed to examine the full-spectrum action of ESAs.

A previous meta-analysis indicated that ESA treatment could improve quality of life in anemic cancer patients (14). In the current study, we did not show a significant improvement in life quality by ESA treatment. The reasons underlying such a major difference remain to be fully investigated. We would like to speculate, as following. ESA treatment clearly could increase Hb, but has been reported to promote cancer progression by some studies (8,10). Expected improvement with increasing Hb by ESA treatment may have been neutralized by expedited cancer progression.

In conclusion, this meta-analysis confirmed that ESA treatment is effective in alleviating anemia in anemic cancer patients. When used in patients with a target Hb at no more than 13 g/dL, ESA treatment is not associated with increased frequency of severe adverse events.

This study was partially supported by the Development Projects of Science and Technology of Shandong Province, China (2012GGE27073).