Characteristics and trends in incidence of childhood cancer in Beijing, China, 2000-2009

Data of childhood cancer were derived from Beijing Cancer Registry which has collected population-based cancer incidence data since 1976. Since 1998, the registry surveillance coverage has expanded from 8 to 16 districts, and residents covering changed from 7 to 12 million. Medical records of the newly diagnosed cancer inpatients were monthly required to report to the Beijing Cancer Registry from all the 138 medical hospitals in Beijing. Before 2003, the information of the newly diagnosed cases was reported using a standardized notification card. Since 2003, all designated hospitals have reported cancer data to Beijing Municipal Health Bureau of Statistics Platform using the online Health Information System (HIS). Information is available at the patient level and includes basic demographics, origin site, histology, incidence date, most valid basis of diagnosis, behavior classification, reporting hospital and other relevant variables. Our analysis includes data on all malignant tumors diagnosed in children aged less than 15 years from 2000 to 2009, as well as non-malignant tumors of the central nervous system (CNS). Population data are derived from the Statistic Department of Beijing Municipal Bureau.

All rates were age-standardized using the direct method to the world Segi’s population and expressed per million person-years. Trends were characterized by calculating annual percent change (APC) using Joinpoint 3.4.3 Regression Program (5), developed by the Surveillance, Epidemiology, and End Results (SEER) Program (6). A significance level of 0.05 (two tailed) was used for all analyses. The number of cases was shown by cancer sites, sex and age groups (0 years,1-4 years, 5-9 years, 10-14 years), and the incidence rates of different age-groups were calculated by sex. The age-standardized rates (ASRs) for all children were calculated by cancer sites. 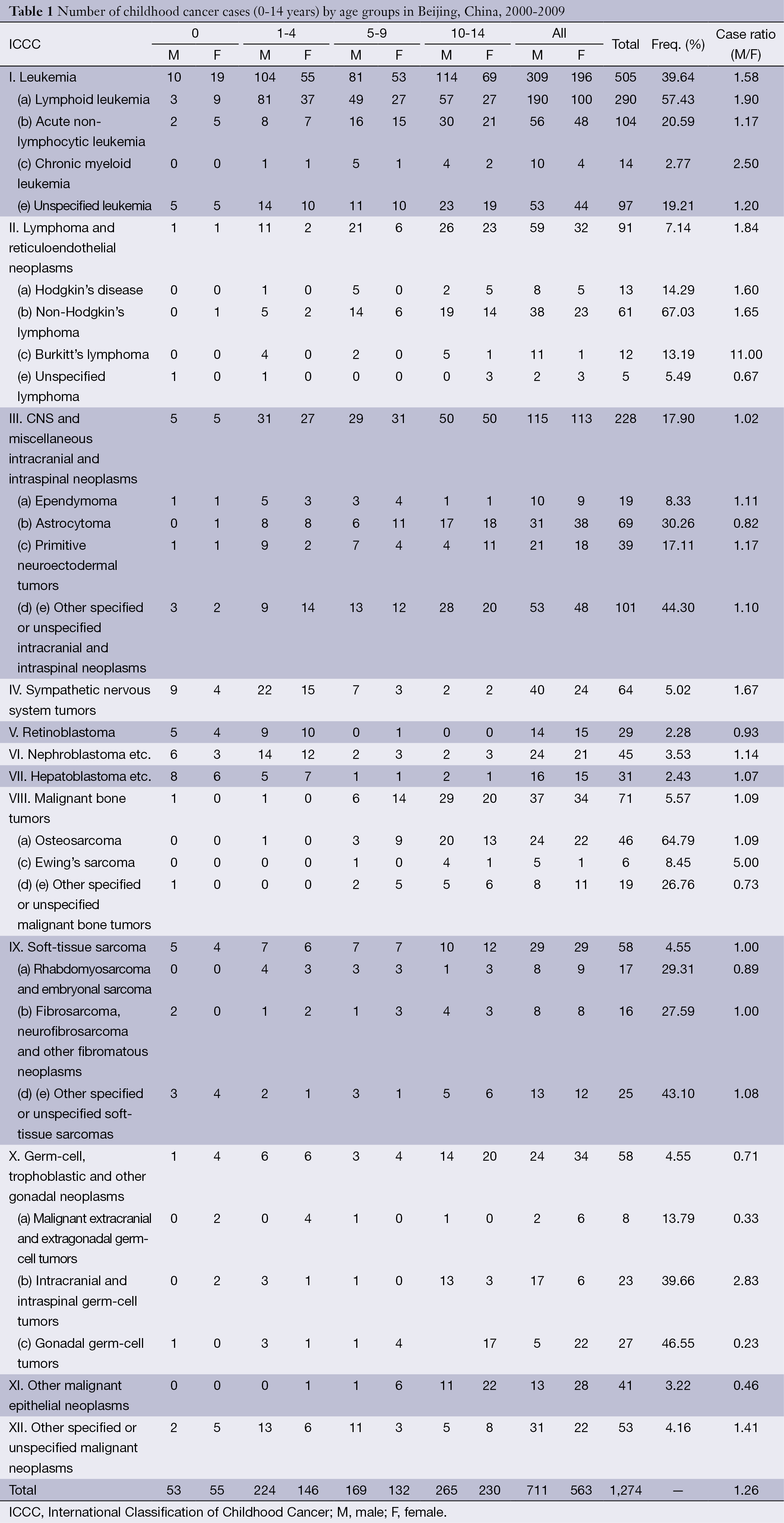 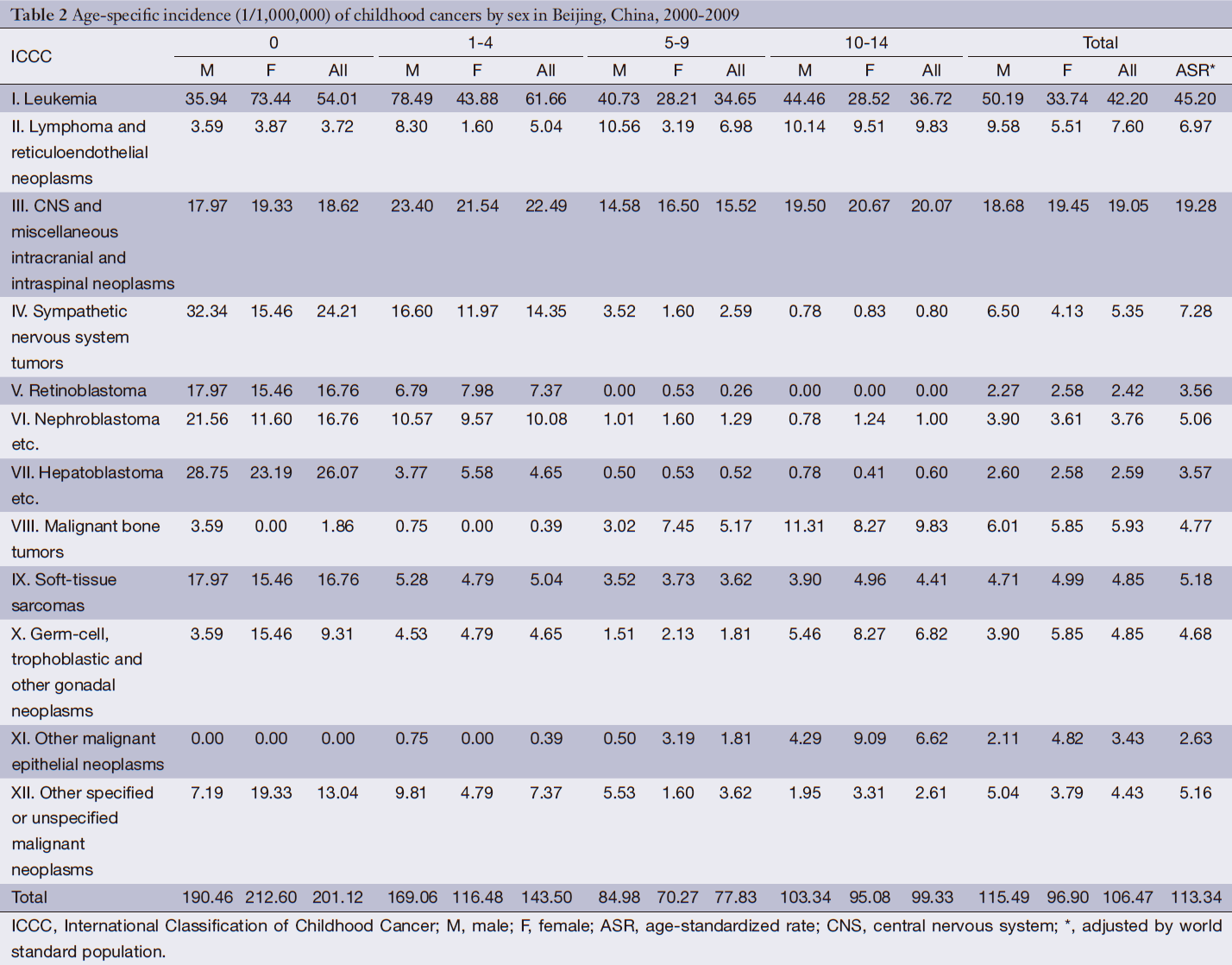 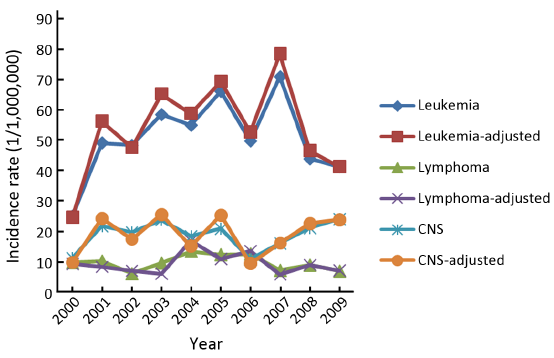 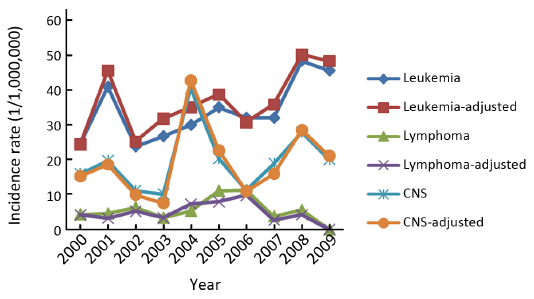 The incidence of childhood cancer during 1973 to 2005 in urban Shanghai showed no significant trend (7), while in the United States, the rate has increased slightly at an annual rate of 0.6% per year since 1975 (8). Our findings showed different trends with an average increase of 5.84% (95% CI: 1.0-10.9) annually in Beijing. But the trend among boys showed no significant increase with an APC of 5.33 (95% CI: –0.6-11.6). In terms of the top 3 childhood cancers among boys, the trends also showed no significant increase. Among girls, a significant increase was seen with an APC of 6.54% (95% CI: 1.5-11.8), which is mainly due to the increase of leukemia. The trend of overall incidence in Beijing was the same as that in Australia (9). The reasons for increasing incidence rates in Beijing are largely unknown. Some of the increase may be due to changes in environmental factors or the improved diagnosis. The completeness of cancer registration may also have contributed (10).

Overall cancer in childhood is more common among males than females and the male to female ratio in the most developed countries is around 1.2:1. Our data showed the ratio is 1.26:1, which is the same as other countries (11). However, the male to female ratio varied by diagnostic category. The ratios of Burkitt’s lymphoma and Ewing’s sarcoma are 11:1 and 5:1, respectively. However, some cancers, like germ cell and retinoblastoma, show a slight female preponderance. Like in the childhood cancer elsewhere, leukemia is the most common childhood cancer in Beijing, which accounts for 39.64%, higher than that in other regions in the world. The incidence of leukemia in Beijing was higher than that in England and Wales, Iraq (12,13). Lymphoid leukemia (57.43%) was the commonest among leukemia, and the same results were seen in the United States and Thailand (11). Brain and CNS tumors are the second commonest childhood cancer in Beijing, followed by lymphoma, which was similar to Australia (9). But in Thailand (11), the second one is lymphoma, followed by CNS tumors. Our data showed that the sequence of the top 3 cancers varied in different age groups.

Our knowledge about the etiology of childhood cancer is still quite limited. Environmental causes of childhood cancer have long been suspected by many scientists but have been difficult to pin down, partly because cancer in children is rare and because it is difficult to identify past exposure levels in children, particularly during potentially important periods such as pregnancy, in-utero, or even prior to conception (14). Hence, many of the environmental agents hypothesized for childhood cancer, such as the radiation from nuclear power plants, diagnostic CT, pregnancy and maternal tobacco smoking and exposure to benzene, etc. remain speculative (15-20). Further epidemiological studies to understand on the risk factors on childhood cancer should be conducted in the near future.

This is the first population-based study in Beijing, China that surveyed the incidence of childhood cancer by collecting all childhood cancers from all treating hospitals in Beijing. Our study indicated that incidence rate of childhood cancer in Beijing was higher than the average level of China but lower than western countries. The incidence trends of childhood cancer, especially leukemia among girls, showed a significant increase, while among boys, no substantial change was seen during the observed time period from 2000 to 2009. Some sex-specific trends by subcategories and trends of major cancers in different age groups by cancer sites merit further investigation.