Pancreaticoduodenectomy (PD) is a standard surgical procedure for periampullary tumors with very high morbidity. The gastroduodenal artery stump (GDAS) hemorrhage is one of the potentially fatal complications after PD, often occurs 1 to 4 weeks (1-13). GDAS bleeding is usually considered to be correlated with local inflammation and corrosion due to pancreatic leakage (2-4,7-13). Although, as the octreotide and somatostatin widely used and the pancreaticojejunostomy methods gradually improved, the overall incidence of pancreatic fistula (PF) decreased, but now it is still about 2-22% (1-19). PF is difficult to avoid completely (20), thus the risk of GDAS corroded by pancreatic juice is hard to avoid completely.

Maeda et al. reported omental flap could be used to cover the vessels during PD, and it was benefit to reduce postoperative intra-abdominal bleeding and infection (21). Sakamoto et al. indicated wrapping the GDAS using the falciform ligament during PD is useful for protecting the stump of the gastroduodenal artery from pancreatic juice and for preventing hemorrhages (22). But, recently a new retrospective study revealed that the use of omentum or falciform ligament did not decrease complications after PD (23).

We designed a retrospective historical cohort study to investigate whether wrapping the GDAS using the teres hepatis ligamentum during PD could decrease the rate of GDAS hemorrhage.

We retrospectively reviewed complications of 280 patients (175 males and 105 females; age 12 to 76 years, average 55.7±10.4 years) who accepted PD for malignant (n=269) and benign (n=11) diseases in the Biliary Tract One Department of Eastern Hepatobiliary Surgery Hospital from January 2005 to December 2012. According to whether wrapping the stump of gastroduodenal artery, patients were divided into two groups. A total of 140 consecutive patients (85 males and 55 females; average 55.8±10.0 years) accepted the “wrapping” procedure during PD (wrapping group); the other 140 consecutive not wrapping patients (85 males and 55 females; average 55.7±10.8 years) were selected as controls (non-wrapping group). Age, sex, preoperative data, estimated intraoperative blood loss, postoperative complications, pathologic parameters and hospitalization time were compared between two groups.

All of 280 patients underwent the conventional pancreaticojejunostomy. PD extent: distal-end stomach (more than 50% of whole stomach), duodenum, pancreatic head and uncinate process of pancreas, gallbladder and common bile duct were resected. Lymph node dissection extent: routine dissection at number 3, 4, 5, 6, 8, 9, 12 13 series of lymph nodes were performed. GDAS treatment: stitch ligature with 1-0 silk suture with needle, followed by number 4 silk suture ligation to strengthen was conducted. GDAS was exposed in non-wrapping group, but wrapped in wrapping group. Pancreatic-enteric anastomosis: end-to-side reconstruction, rather than duct-to-mucosa was performed. Silica gel tube was detained in the pancreatic duct to drain the pancreatic juice. Hepatic duct jejunum anastomosis: end-to-side anastomosis between common hepatic duct stump and jejunum side wall was performed and T tube was detained to drain the bile. Gastroenteric anastomosis: anastomosis between posterior wall of remnant stomach and side wall of jejunum was performed. The interval between gastrointestinal stomas and chol-intestinal stomas was about 40 cm. Jejunum side to side anastomosis (Braun anastomosis): side-to-side anastomosis was performed between input and output jejunums at about 10 cm away from gastrointestinal stomas. Peritoneal cavity drainage tube placement: one drainage tube was put in front of pancreas-intestinal stomas and another one was put behind chol-intestinal stomas.

All patients received intensive care for at least 12 hours in ICU wards. Somatostatin was infused into patients at 4 mL/h (6 mg dissolved in 100 mL physiological saline) by minipump or 0.1 mg octreotide once per 8 hours was injected subcutaneously to inhibit pancreatin secretion until hemodiastase level dropped to normal (medication should be extended in pancreas leakage patients).

PF criteria: Bassi (19) grade B and C was defined as PF, and grade A was excluded due to its light manifestation and non-special treatment. Biliary fistula criteria: bile-like liquid was observed in abdominal cavity drainage tube among the first 3 days after operation, and flow discharge was above 50 mL/d in 3 continuous days. Postoperative abdominal cavity or alimentary tract hemorrhage criteria: we referred to International Study Group of Pancreatic Surgery (ISGPS) definition (24). Postoperative infection criteria: hemogram was above upper normal level, combining with body temperature higher than 38.5 centigrade, meanwhile, positive outcome in body fluid cultivation, such as blood, abdominal fluid, sputum or bile. Delayed gastric emptying criteria (25): nasogastric tube was detained more than 10 days, and combining with at least one of the following conditions: (I) vomiting after pulling out gullet; (II) using propulsives more than 10 days after operation; (III) inserting nasogastric tube again to decompress; (IV) not able to resume oral intake; patients whose nasogastric tube was detained less than 10 days but suffered at least two of the above conditions, and were confirmed by alimentary tract iodine visualization or upper abdominal CT were also diagnosed gastric emptying disorder. 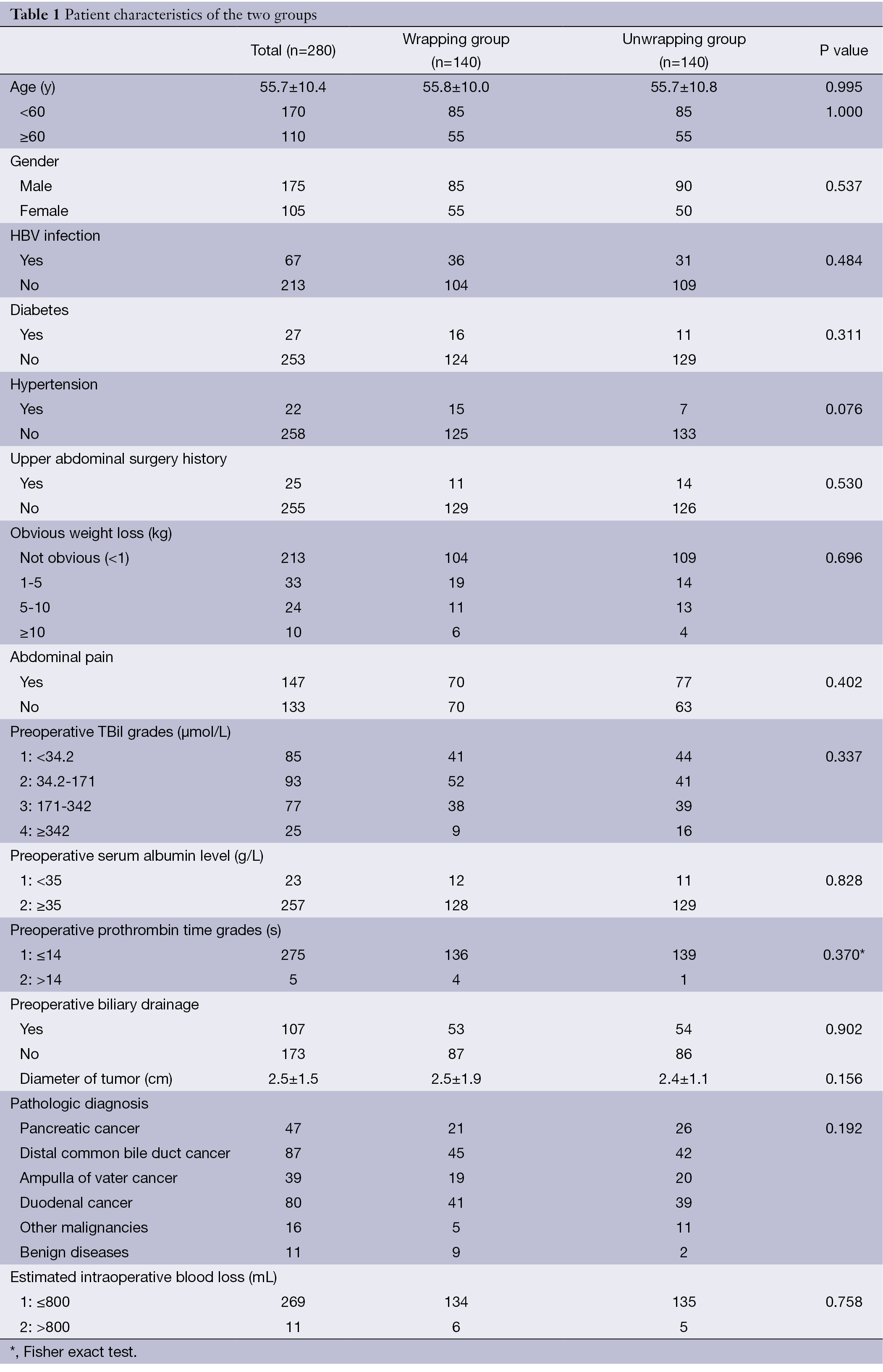 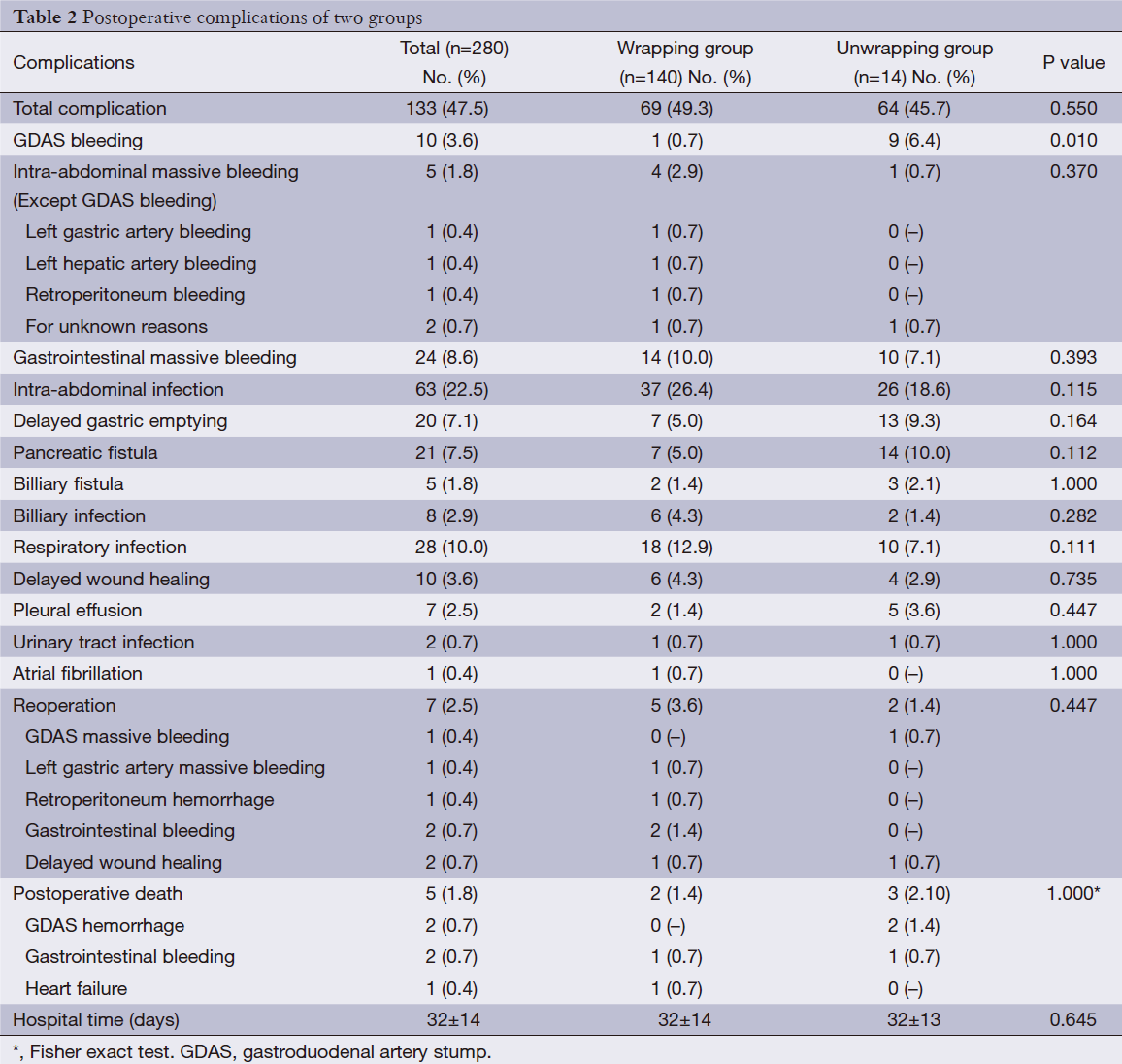 Treatment and prognosis of GDAS hemorrhage

The GDAS hemorrhage occurrence time of ten patients were at least one week (range from 8 to 43 days) after operations. Digital selective angiography (DSA) and transcatheter arterial embolization (TAE) were performed to stanch bleeding for all of ten GDAS hemorrhage patients, and seven (7/10) of them got successful hemostasis. One patient got hemorrhage volume decreased, and underwent emergent surgical hemostasis successfully after his shock was eased, but the other two kept bleeding after DSA + TAE, and shock were even aggravated, thus emergent surgical hemostasis could not be performed and these two patients died as a result (Detailed in Table 3).

Traced back to the 20th century, with the invention and widely utilization of somatostatin and octreotide, the incidence of PF and postoperative intra-abdominal hemorrhage relating to PF have been decreased obviously (26,27). In recent years, retrospective or RCT researches on improving pancreatic juice drainage (28-32) and pancreatic-enteric anastomosis (33-42) have been done all over the world, in order to further reduce the PF incidence. However, none of these methods have been demonstrated significant superiority (43), and Peng et al. (20) considered that due to the injuries on pancreatic parenchyma and minor ductus pancreaticus caused by needle and thread during pancreatic-enteric anastomosis, PF is inevitable, and slight PF evokes severe PF. Now the overall incidence of PF is still about 2-22% (1-19), and the incidence of PF who need clinical treatment according to Bassi grading criteria in this study is 7.5%, which is correspondent with former reports. After hepatoduodenal ligament lymph node dissection during PD, GDAS is exposed nearby pancreas-intestinal stomas, and is easily got corroded by pancreatic juice, thus causing a high risk of hemorrhage. Although PF is not the direct death cause, GDAS hemorrhage is possibly fatal. The intra-abdominal hemorrhage rate after PD is approximately 5-16% according to report (44), among which GDAS is a frequent bleeding locus (3-6,8-13,22), and PF and intra-abdominal infection are key risk factors of intra-abdominal hemorrhage (2-4,7-13). In our study, the total postoperative intra-abdominal hemorrhage rate was 5.4% (15/280), but GDAS hemorrhage took up 66% (10/15) of them, which is similar to former results by other scholars.

PF is difficult to avoid completely (20), thus the risk of GDAS corroded by pancreatic juice can not be avoided completely. Some scholars (21,22,45) began to use the omentum or falciform ligament to cover/wrap the exposed major blood vessels, in order to protect the vessels from pancreatic juice and reduce the incidence of postoperative intra-abdominal bleeding. For example, Maeda et al. indicated only one patient (1/100) occurred postoperative intra-abdominal bleeding after covering the vessels using omental flap during PD (21); Abe et al. reported none patient (0/36) developed late post-pancreatectomy hemorrhage after the pedicled falciform ligament was used to cover the major exposed vessels, and was fixed to the surrounding retroperitoneal connective tissue (45); Sakamoto et al. reported just one patient (1/136) developed GDAS hemorrhage after wrapping the GDAS using the falciform ligament (22). In our study, only one patient (1/140) developed GDAS hemorrhage after GDAS wrapping by teres hepatis ligamentum, which was similar with the outcome in single arm, non-control group clinical research by Maeda et al., Sakamoto et al. and Abe et al. (21,22,45). We adopted the non-wrapping patients as control, and found that GDAS hemorrhage incidence was significantly lower in wrapping group than in non-wrapping group (1/140 vs. 9/140, P=0.010), which indicated that wrapping GDAS is beneficial to reduce GDAS bleeding incidence. On the contrary, a recent retrospective study of the Japanese Society of Pancreatic Surgery indicated that using omentum or falciform ligament did not decrease the incidence of intra-abdominal hemorrhage after PD (23). On one hand, the study adopted polycentric retrospective data, while statistical bias may occur for the fact that the operation standard differed from each center and researchers cumulated the data from different centers directly; on the other hand, whether wrapping GDAS can intrinsically reduce GDAS hemorrhage incidence is still under debate, and RCT study is an urgent need in order to find out the value of wrapping GDAS.

“Wrapping” had no obvious influence on other complications

For instance, no significant difference was observed on the postoperative PF incidence in two groups (7/140 vs. 14/140, P=0.112), which is similar to former results (21-23,45). Maeda et al. advocated that wrapping porta hepatic blood vessel by omentum majus could reduce the incidence of postoperative intra-abdominal infection after PD (21), while our data did not show significant difference on intra-abdominal infection between two groups (37/140 vs. 26/140, P=0.115). There were no such complications as hepatic artery stenosis, hepatic function recovery disorder, and hepatophyma that relating to the wrapping procedure in the wrapping group, which was similar to the results obtained by Maeda et al. (21) and Abe et al. (45).

GDAS should be entirely “wrapped” with gentle approach

The approach we adopted to wrap GDAS is similar to that reported by Sakamoto et al. (22) (Figure 1). However, they wrapped GDAS by the pedicled falciform ligament, and we chose the pedicled teres hepatis ligamentum. Although the procedure of wrapping GDAS is simple and low time-consuming, there are two key points that should be noticed: (I) GDAS should be wrapped entirely to separate from the site of pancreatojejunostomy; (II) wrapping should not be too tight to affect the hepatic artery blood supply (Figures 1,2). Our data showed: there were no significant differences between wrapping group and non-wrapping group on the other postoperative complications (except GDAS hemorrhage incidence). 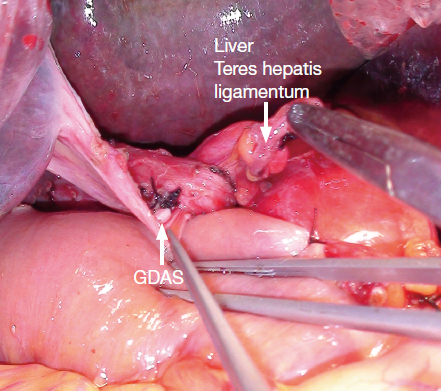 Figure 1 GDAS was wrapped by the teres hepatis ligamentum from the rear. GDAS, gastroduodenal artery stump. 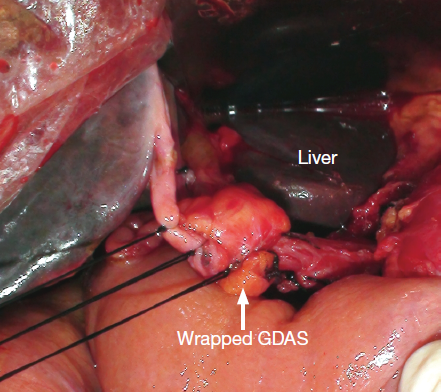 DSA + TAE was useful for early stage of GDAS hemorrhage, but once hemodynamic instability occurred emergency surgical hemostasis might be more profitable

This study was funded by A new round of the Shanghai Health System outstanding young talent training plan (XYQ2011030).