A 51-year-old woman with a background of hyperthyroidism and diabetes mellitus occasionally found a palpable mass in her left breast. She reported no other symptoms. An ultrasound scan of her breast showed a mass in left breast and another mass in the right. Both of them are Breast Imaging Reporting and Data System (BI-RAS) grade 4. She went on to have a core needle biopsy of her left breast lesion. Histology and immunostaining studies showed the left breast lesion was an invasive ductal carcinoma of the breast (Figure 1A). Immunohistochemistry (IHC) showed ER+(80%), PR+(70%), HER-2(+++), Ki-67+(30%), CK5/6(–), and P63(–). Then, this patient was given left mastectomy, axillary clearance and right lumpectomy. The histology was surprising. There were actually two lumps in the left breast. One is a 20 mm low-grade invasive ductal carcinoma with clear excision margins and no lympho-vascular invasion. The other was a 25 mm diffuse large B-cell lymphoma (Figure 1B). IHC showed CD3(–), CD20(+), CD21(–), BCL-6(–), CD10(–), MUM-1(weak+), BCL-2(partial+), TDT(–), CD23(–), cyclin D1(–), CD5(–), CK(–), and KI-67(over 50%). Lesion in the right breast was also diffuse large B-cell lymphoma. The left axillary contents contained 15 lymph nodes, and none of them contained metastatic breast cancer or lymphoma. Our patient went on to have a fludeoxyglucose (FDG) positron emission tomography-computed tomography (PET-CT) scan from the skull to limbs. This showed a focal intense uptake in the right breast, and increased FDG uptake in multiple lymph nodes, including lymph nodes in right supraclavicular fossa, bilateral hilar, mediastinal, around abdominal aorta and in the retroperitoneum. Increased uptake in the 8th rib was seen but without destruction of bone. Scattered nodules were found in both lungs, some of them with increased FDG uptake (Figures 2,3). All these results were discussed at the lymphoma and breast multidisciplinary team meeting. Our patient went on to have chemotherapy to cover the breast cancer and lymphoma consisting of a regimen of epirubicin, vincristine, prednisone and cyclophosphamide (CHOP) chemotherapy with rituximab. Moreover, we planned to follow adjuvant endocrine therapy after chemotherapy. The pathology and clinical manifestation supported the diagnosis of synchronous breast cancer and secondary breast lymphoma (SBL). 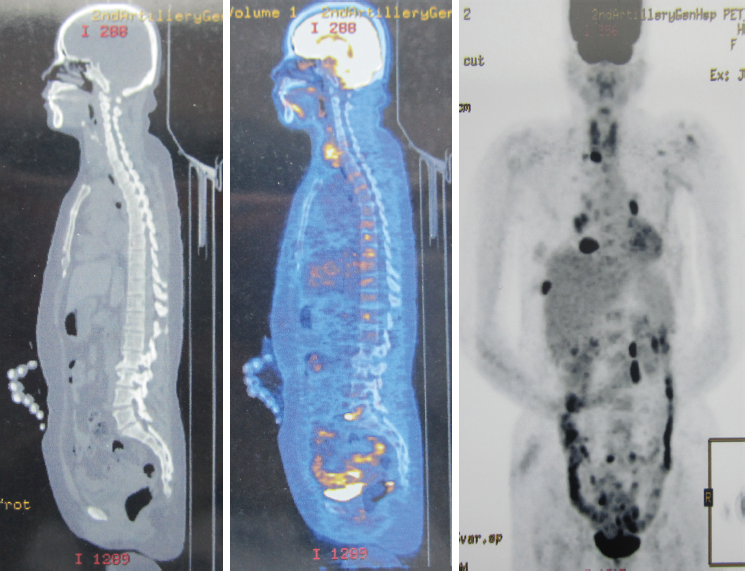 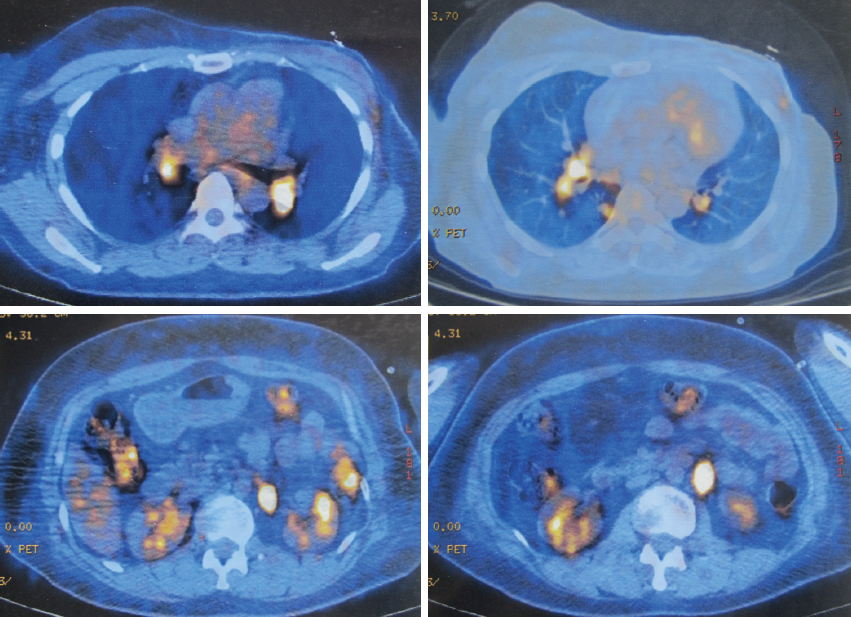 The second patient is a 47-year-old woman who found a palpable mass in her right breast. An ultrasound scan of her breast showed a mass in right breast and little nodules around it. The mass was BI-RAS grade 4. Then, this patient was given right mastectomy and axillary clearance. Histology report showed invasive ductal carcinoma of the breast, and IHC showed ER(>+75%), PR(+>75%), HER-2(+++), Ki-67+(10-25%), CK5/6(–), and P63(+); clusters of large lymphocyte scattered among the breast tissue, and IHC showed LCA(+++), CD20(+++), CD3(–), CD34(–), CD99(–), and Ki-67(+>75%) (Figure 4A). Pathologists diagnosed that the lesions are diffuse large B-cell lymphoma (Figure 4B). The right axillary contents contained 11 lymph nodes, and none of them contained metastatic breast cancer or lymphoma. Our patient went on to have thoracic CT scan, ultrasound scan of abdominal, pelvic and superficial lymph nodes, bone marrow and cerebrospinal fluid (CSF) testing. No metastasis was found. All these results were discussed at the lymphoma and breast multidisciplinary team meeting. This patient also receives R-CHOP to cover the breast cancer and lymphoma. After 6-8 cycles of chemotherapy, we planned to follow trastuzumab for one year, and adjuvant endocrine therapy after that. The pathology and clinical manifestation supported the diagnosis of synchronous breast cancer and primary breast lymphoma (PBL).

Two cases mentioned above shared the similarities. Both of the patients were diagnosed as lymphoma and breast cancer simultaneously. They are both middle-aged women, with stage I invasive ductal carcinoma of the breast. Both patients are luminal B breast cancer, which means ER and PR positive and HER-2 positive. But the presentation of breast lymphoma was different.

Breast lymphoma is classified as PBL or SBL (2). Wiseman and Liao first defined PBL according to four criteria: (I) mammary tissue and lymphoma must be in close anatomic proximity; (II) no preceding diagnosis of extramammary lymphoma; (III) no evidence of disseminated disease, other than ipsilateral axillary lymphadenopathy; and (IV) adequate quality of the histopathological specimen. These criteria are still widely accepted (2,3). According to this definition, the first patient is the SBL, and the PBL.

As to treatment, systemic therapy with an anthracycline-based regimen and rituximab is recommended for CD20 positive breast lymphoma. Radiotherapy has an important role as adjuvant consolidation therapy. Surgery should be minimally invasive and for diagnostic purpose only. Breast lymphoma is an invasive disease. The 5-year overall survival (OS) is 53% according to a recent meta-analysis (6). Even for PBL, the 5-year OS for stage IE (78-83%) and stage IIE (20-57%) is relatively low (6,7). As to stage I invasive ductal carcinoma of the breast, the 5-year OS was over 95%. That is why we choosed R-CHOP as their chemotherapy regimen. On one hand, breast lymphoma is of poor prognosis; on the other hand, this anthracycline-based regimen can cover adjuvant chemotherapy of breast cancer.

Although simultaneous occurrence of the two diseases is uncommon, people have paid attention to this phenomenon. In 1990, Stiemr first reported the synchronous occurrence of axillary malignant lymphoma and carcinoma of the breast metastasizing into the ipsilateral axilla. Geffen once reported ipsilateralbreast carcinoma following treatment for PBL, and perhaps we can name it metachronous lymphoma and breast cancer (8).

The mechanism of the simultaneous occurrence of the disease is uncertain. Papajík et al. once reported that lymphoma is a hematological cancer affecting the lymphatic system. The lymphocytes are cancerous and functionally abnormal resulting in an immunosuppressed state. This is associated with an increased risk of developing other types of primary malignancies ranging from colorectal cancer to breast cancer (9). Moreover, all patents, including two patients mentioned above and one in David’s study, are HER-2 positive. Her-2 is the driver gene of breast cancer. It is possible that HER-2 also plays the same role in the occurrence and development of lymphoma. However, because the lack of HER-2/neu overexpression in NHL was concluded in an 87 sample study, this phenomenon may also be a coincidence (10).

These two patients remind us of the coexistence of breast cancer and breast lymphoma. Assessment and management of these patients are challenging and should include appropriate core or excisional biopsy, PET-CT scan, bone marrow and CSF testing and discussion at multidisciplinary team meetings about treatment in the presence of hematologists, oncologists, and surgeons.