Diagnosis of solitary pulmonary nodules (SPNs) in clinical radiology is mainly based on radiographic sign analyses of lesions, such as the position, size, number, morphology, margin, density and changes of adjacent structures. Since it was up to the clinical experience of radiologists, there is a subjective factor involved in this process. Moreover, different diseases might share same radiological findings, and different radiological presentation might also be observed in different stages or types for a single disorder. Therefore, radiologists might make totally different diagnoses based on the same radiological changes.

In this study, the role of textural features in the differentiation of SPNs has been investigated. Segmentation and extraction of SPNs, as well as their spatial structures and grey-scale, were quantitatively described, in expectation to find appropriate statistical variables to improve the diagnostic specificity of SPNs.

The maximal slice was selected and segmented by using the strategy of 2D Otsu threshold method (5) upon these 379 SPNs. In combination with morphological approaches, open and close calculations were implemented for binary images to eliminate the influence of micro-vessels. Objects were isolated from the narrow parts of target area with the edge smoothing, but the target area and morphology remained unchanged. Profiling tracking was conducted for binary images, and the maximal gradient point was selected as the starting point of boundary tracking from the gradient map, with the maximal gradient boundary determined by eight neighborhood searching methods.

With natural contrast and high difference in grayscale between SPNs and normal lung tissues, self-adaptive threshold segmentation method was employed to locate SPNs and to achieve segmentation automatically. After segmentation, the edge of SPNs was highly consistent with that of SPNs in original images (Figure 1). 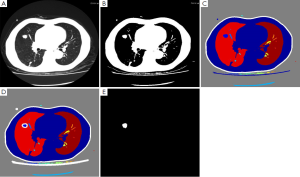 Figure 1 Steps for segmentation for SPNs. (A) Image of the maximal slice of SPNs; (B) a binary image after optimal threshold processing; (C) pulmonary mass after morphological processing; (D) areas of interest selected by the profiling tracking method; (E) SPNs after segmentation. SPNs, solitary pulmonary nodules.

were described as follows:

SPSS 17.0 software is employed in the statistical analyses of this study. Inter-group comparison of texture variables between benign and malignant SPNs were analyzed by t-test. Differential analyses were performed upon SPNs of different sizes based on texture features, and a discrimination function was established to calculate the discrimination efficiency.

Comparison of texture features between benign and malignant SPNs

Qualitative diagnosis of SPNs remained to be highlights and challenges of medical imaging, especially in the diagnosis of patients with small SPNs. In this study, the texture features of radiological images were quantitatively analyzed. SPNs were classified according to the specified sizes and were utilized to determine the nature of SPNs, with different models of standardized linear discrimination function given.

According to the weighing position of classification system, malignant SPNs might be determined if the value of discrimination function >0, while the value <10 denoted benign SPNs, with 83.3%, 90.0% and 86.6% for the sensitivity, specificity and overall discrimination accuracy, respectively. 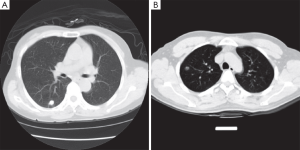 According to the weighing position of classification system, benign SPNs might be determined if the value of discrimination function >0, while the value <10 denoted malignant SPNs, with 86.6%, 88.2% and 87.1% for the sensitivity, specificity and overall discrimination accuracy, respectively. 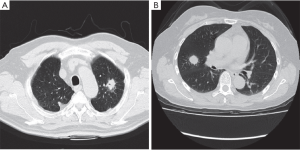 According to the weighing position of classification system, benign SPNs might be determined if the value of discrimination function >0, while the value <10 denoted malignant SPNs, with 94.7%, 91.8% and 93.9% for the sensitivity, specificity and overall discrimination accuracy, respectively.

Contrast reflects the sharpness of images and the depth of texture grooves. Higher grey-scale diversity (e.g., contrast) was associated with more pixels and higher contrast. Entropy reflects the non-uniformity and complexity of image texture. More complicated images were associated with higher entropy (11,12). The contrast and entropy were lower in benign SPNs than in malignant nodules, which showed malignant nodules were associated with deeper grooves in image texture and more complicated grey-scale in local images. In contrast, benign SPNs were associated with shallow image textures and relatively homogenous distribution of grey-scale. These results were consistent with the relative complicated nature of malignant tumors. Malignant tumors are often concomitant with hemorrhage, liquefaction and necrosis, in addition to their inconsistent characteristics of cell size, morphology and polarity, which constituted the pathological basis of texture changes.

For SPNs of different size groups, texture feature based differential diagnosis showed satisfactory accuracies for the groups of ≤10, 11-20, and >20 mm, with the sensitivity of 83.3%, 86.6% and 94.7%, the specificity of 90.0%, 88.2% and 91.8%, and the accuracy of 86.8%, 87.1% and 93.9%, respectively. For texture features, based on the results of intergroup differentiation of nodules in different sizes, the accuracy of differential diagnosis was increased in proportion to the size of pulmonary nodule, mainly due to the continuous elevation of sensitivity without significant changes of specificity.

The texture features of images were important in the differential diagnosis of benign and malignant SPNs. Texture features might be useful to depict certain repeated local patterns and arrangement regularity in specified regions of images, could be used to describe local characteristics of images, and could provide characteristic metrics such as smoothness, roughness and regularity (13,14). In this study, the texture features of SPNs were investigated by the GLCM method, which could be used to determine the correlation between two greyscale points different in both distance and directions to each other based on the co-occurrence matrix model, and reflected the integrated information of direction, spacing and magnitude of changes in image greyscales to describe the roughness and repeated directions of image texture (15-17).

In this study, the diagnostic sensitivities were increased in proportion to the size of nodules in different size-groups of SPNs, without notable changes of the specificity. This was due to the features of benign SPNs, such as regular local texture and relatively homogeneous spreading, without notable texture changes in response to the size increase of nodules. Therefore, the changes of specificity were limited. However, with the size increase of nodules, they were more vulnerable to develop uneven distribution of texture, heterogeneity and even evolvement, resulting in uneven distribution of texture, increased contrast of greyscales and complicated greyscale of local images, and increase of entropy. Thus, with the size increase of malignant SPNs, more notable changes of texture characteristics might be observed, resulting in improved diagnostic sensitivity.

According to CT-based diagnosis of SPNs, the relevant risk factors such as age, size, glitches, lobulation, vascular aggregation, air cavity density and so on were analyzed using binary Logistic regression analysis (18). Since those radiological findings were up to the clinical experience of radiologists, there is a subjective factor involved in this process. Radiological findings segmented by a computer aided approach would be more objective with quantitative texture features, which are truly relevant with benign SPNs and 2 malignant SPNs.