As a serious and under-recognized tumor, ovarian cancer is the most lethal gynaecological malignancy and is the fourth most frequent cause of cancer-related deaths in women around the world. The high mortality is due to the fact that ovarian cancer often manifests with little or no specific symptoms at the early stage. The primary treatment for ovarian cancer is surgical resection of visible disease followed by adjuvant chemotherapy, which usually consists of a combination of platinum-based and taxane-based chemotherapy. More than 70% of such patients initially respond to cisplatin. However, the five-year survival rate is less than 25%. The high mortality rate is based on high proportion of advanced stage cases or aggressive cases experiencing chemoresistance and recurrence (1). For example, the 5-year survival rate of ovarian cancer cases at stage III and IV is about 28 and 16%, while the 5-year survival rate of stage I cases is up to 80% (2). Therefore, it is necessary to explore new approach to reverse chemotherapy resistance and to enhance sensitivity to platinum-based chemotherapy drugs.

This study aimed to evaluate the changes in cell cycle, apoptosis and the PI3K/AKT/mTOR pathway in ovarian carcinoma cells, SKOV3 and SKOV3/DDP, treated with PI-103 and cisplatin, and thus to explore the possible mechanism that PI-103 enhances the sensitivity of SKOV3/DDP ovarian cancer cell line to cisplatin.

The growth inhibition rates of SKOV3 and SKOV3/DDP cells were assessed using the CCK8 assay. Briefly, the exponentially growing cells were digested, and single cell suspension was obtained. A total of 10,000 cells were plated in 96-well flat bottom plates. After 24 hours incubation, the culture media was replaced by fresh culture media containing PI-103 in concentrations of 0.022, 0.044, 0.088, 0.175, 0.35, 0.70 and 1.4 mg/L, and then continually cultured for 24, 48 and 72 h. CCK8 (20 μL/well) solution was added into each well and incubated for 2 h at 37 °C. After incubation, absorbance was determined by a microplate reader at 450 nm and absorbance values were expressed as the percentage of the untreated control. The test was repeated in triplicate. The growth inhibition rate of SKOV3 and SKOV3/DDP was calculated as follows:

The IC50 of DPP for SKOV3 and SKOV3/DDP was assessed using the CCK8 assay. The cells were cultured in 96-well flat bottom plates as the same way described above, and the following concentration series of cisplatin was adopted, 0.78, 1.56, 3.13, 6.25, 12.50, 25.00, 50.00 and 100.00 mg/L. After 72 hours treatment, the inhibition rate was assessed using CCK8 assay, and IC50 was counted according to the concentration of cisplatin and the inhibition rate. The test was repeated in triplicate.

Based on the IC50 results of DDP for SKOV3 and the inhibition rates of SKOV3/DDP cells treated with PI-103, the appropriate condition, DDP (3.13 mg/L) and PI-103 (0.35 mg/L), was selected to explore the cell cycle and apoptosis of SKOV3 and SKOV3/DDP. The two cell lines were treated as following: SKOV3, SKOV3 + cisplatin, SKOV3 + PI-103, SKOV3 + cisplatin + PI-103, SKOV3/DDP, SKOV3/DDP + cisplatin, SKOV3/DDP + PI-103 and SKOV3/DDP + cisplatin + PI-103. The cells were digested and single cell suspension was obtained after treated with cisplatin and PI-103 for 72 h, and 1 mL cell suspension (including 1×106 cells) was shifted to the 2 mL EP tubes. The cells were washed 3 times by pre-cooling PBS and then were fixed in pre-cooling 70% ethanol for 24 h. The tubes were centrifuged at 1,000 g for 3-5 minutes and the supernatant was removed carefully. The precipitation cells were washed by pre-cooling PBS again, and then the propidium (PI) staining solution was added into the tubes. The cells were tested by flow cytometry (488 nm) after incubation in 37 °C for 30 m in dark environment.

Cells were treated as described above, and western blot was performed after 72 hours treatment. The cells were washed with ice-cold PBS, and lysis buffer were added to the cells with mixing and shocking on the ice, which made the cells fully cracked and total protein were extracted after centrifugation at 12,000 g for 20 minutes. The protein concentration was determined by the BCA kit. A 15 mg sample of protein was subjected to SDS-PAGE (12% gels). After electrophoresis, proteins of SDS-PAGE were transferred onto PDVF membranes in transfer buffer [25 mM Tris-HCl (pH 7.4) containing 192 mM glycine and 20% v/v methanol] using semidry transfer way (152 mA, 45 m). Membrane were blocked with 5% non-fat milk in Tris-buffered saline containing 0.1% Tween20 (TBST) at room temperature for 1 h and then incubated overnight at 4 °C with specific primary antibodies. After washing, the signals were detected with horseradish peroxidase-conjugated secondary antibody for 1 h, and visualized using the ECL chemiluminescent system (GE Healthcare, Munich, Germany) and exposed X-ray films. Relative optical densities and areas of bands were quantified using an image densitometer. The densitometric plots of the results were normalized to the intensity of the β-actin band.

Experimental data were presented as mean ± SEM. All statistical analysis was performed with use of the SPSS 13.5. t-test and one-way analysis of variance (ANOVA) followed by Tukey’s post hoc analysis was applied. A P value of <0.05 was considered as statistically significant.

The IC50 of cisplatin for SKOV3 and SKOV3/DDP cells 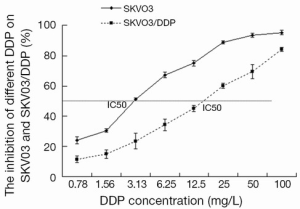 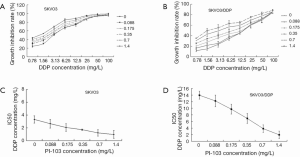 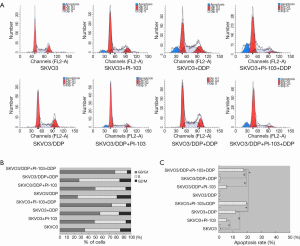 Next, the G1/S-specific protein cyclin-D1, the potent cyclin-dependent kinase inhibitor (CKI) p21 and activated apoptosis protein cleaved caspase-3 were investigated by Western blot (Figure 5A). The expression of cyclin-D1 was displayed in Figure 5B. The expression of cyclin-D1 was increased in the SKOV3, SKOV3/DDP and SKOV3/DDP + cisplatin groups compared with the other groups (*P<0.05, #P<0.01). PI-103 and cisplatin could significantly decreased the cyclin-D1 protein in SKOV3 cells and the combination induced more effects (*P<0.05, #P<0.01). Though SKOV3/DDP was not sensitive to cisplatin, the cyclin-D1 expression was also significantly decreased (#P<0.01), which was no significantly different compared with the SKOV3 + PI-103 + cisplatin group. 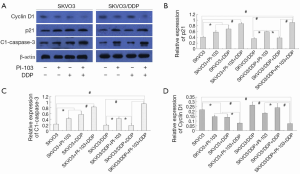 The expression clease-caspase-3, the activated apoptosis protein, was also detected. The activated caspase-3 was significantly increased in the treatment group except the SKOV3/DDP + cisplatin group, and the combination showed better effects on activating caspase-3 in SKOV3 and SKOV3/DDP + DDP cells (*P<0.05, #P<0.01) (Figure 5C).

Phosphorylation of Akt and rpS6 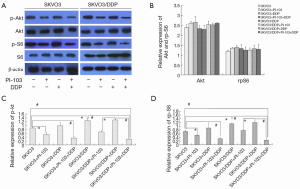 In this work, we firstly explore the effect of PI-103 on the proliferation of SKOV3 and SKOV3/DDP cells, and the results showed that there was no obvious difference between the two cells. Based on the proliferation curve, 0.35 mg/L was selected as the subsequent concentration. In addition, we found that the IC50 of cisplatin for SKOV3 and SKOV3/DDP cells was 3.31 and 13.96 mg/L, which revealed the strong drug resistance of SKOV3/DDP cells to cisplatin. In the next step, the combination of PI-103 + cisplatin was introduced to explore the inhibition effect. The results showed that the PI-103 could significantly increase the sensitivity of SKOV3/DDP to cisplatin.

Previous studies had demonstrated an association between cell cycle regulation and tumor development, and blockage of the cell cycle progression has become an appropriate target therapy (15,16). Our results indicated that PI-103 could significantly increase the G0/G1 DNA content in SKOV3 and SKOV3/DDP cells and the apoptosis rate treated with cisplatin. The expression levels of cell cyclic proteins and apoptosis proteins were also changed. This suggests that PI-103 could reduce drug resistance of ovarian cancer cell SKOV3/DDP through inhibiting cell proliferation and inducing apoptosis, and PI-103 could enhance the sensitivity of SKOV3/DDP to the cisplatin. PI-103 may be an emerging paradigm for the treatment of cisplatin-resistant ovarian cancer cases.

Treated with PI-103 and cisplatin, the cell cycle was changed. Hence, a question is that whether the proteins in the PI3K/Akt/mTOR signal pathway were also changed. Our results indicated that PI-103 could inhibit the activated Akt and rpS6 but cisplatin could not. However, the combination of PI-103 and cisplatin showed stronger ability of inhibiting the activated Akt and rpS6 either in SKOV3 or SKOV3/DDP cells. This suggests that the interaction between PI-103 and cisplatin could increase the ability of inhibiting activated Akt and rpS6 and inhibit the PI3K/Akt/mTOR signal pathway, which is a very important signaling pathway in apoptosis and ovarian cancer (17,18). Schwab et al. reported that PI-103 inhibits the chordoma cell proliferation and promots apoptosis (19). Chen et al. found that PI-103 could significantly increase the sensitivity of malignant glioma to radiotherapy (20). Many in vitro studies showed that PI-103 also improves the anti-tumor effect of some chemotherapy drugs such as cisplatin, paclitaxel, vincristine, doxorubicin (21).

Tumor cells could dynamically adapt to chemotherapy drugs through complex signaling networks, and this results in drug resistance. Blocking one of such pathways might increase the sensitivity of tumor cells to chemotherapy. Nowadays, it is becoming increasingly apparent that the effects of mostly applied target therapies are limited due to drug resistance. Our results revealed that the dual inhibitor PI-103 could enhance the sensitivity of SKOV3/DDP ovarian cancer cell line to cisplatin, which maybe through inhibiting the activated PI3K/Akt/mTOR signal pathway and increasing the G0/G1 DNA content. Based on this, PI-103 could be the potential candidate to solve drug resistance for ovarian cancer cases. Our results suggest that concomitant inhibition of PI3K and mTOR could be a promising therapeutic strategy for the treatment of ovarian cancer cases developed—drug resistant to cisplatin. However, the detailed and accurate mechanism still needs to be studied in future.

In this research, we explore possible mechanism of enhancing the sensitivity of SKOV3/DDP ovarian cancer cell line to cisplatin chemotherapy by treating with PI-103, a dual inhibitor of phosphatidylinositide 3-kinase and mTOR. The results showed that PI-103 could significantly increase the sensitivity of SKVO3/DDP cells to cisplatin through inhibiting the activation of PI3K/Akt/mTOR signaling pathway and the dual inhibit effect could be a promising therapeutic strategy for the treatment of ovarian cancer cases developed—drug resistant to cisplatin.