Located at one of the most active common fragile sites involved in cancer, FRA16D, the WW domain-containing oxidoreductase (WWOX) has been reported to be a tumor suppressor. Likewise, loss of WWOX expression or function has been identified in a number of tumors, including breast and bladder cancer (1-3). Results from animal models revealed that Wwox–/– mice are postnatal lethal, and the Wwox+/– mice are more prone to develop spontaneous breast tumors as compared to their matched-littermate controls (1,4), supporting a tumor suppressing function of WWOX.

WWOX is a 46-KDa protein that contains two N-terminal WW domains and a central short-chain dehydrogenase/reductase (SDR) domain (5). A previously published study suggested that WWOX predominately functions through its first WW domain, which binds the proline-tyrosine rich PY motifs (PPxY, where P is proline, Y is a tyrosine and x is any amino acid) of a partner. WWOX has also been shown to regulate a number of cellular processes, including cell growth, differentiation, and apoptosis, through interacting with several proteins including p73 (6), Ap2α and γ (7), ErbB4 (8,9), etc. Despite these findings, the functional mechanisms of WWOX have not been fully explained to date.

The Krüppel-like transcription factor 5 (KLF5/IKLF/BTEB2) has been suggested as an oncogene in multiple carcinomas (10) and reported to promote cell proliferation (11-14), migration (15), and tumorigenesis (11) in different cell models, including bladder and breast cancer cells. Moreover, a high expression level of KLF5 was reported to be an unfavorable prognostic biomarker correlated with shorter survival among breast cancer patients (10,16).

According to the gene expression status of the estrogen receptor (ERα), progesterone receptor (PR) and human epidermal growth factor-2 (Her-2), molecule-based classification of breast cancers has defined several different subtypes: the luminal subtype (ER+ and/or PR+), the Her-2 subtype (Her-2+), and basal subtype (usually ER-/PR-/Her-2–) (17,18). The basal-like subtype of cancer is associated with more aggressive histology, poorer prognosis, more increased unresponsiveness to typical endocrine therapies, as well as shorter survival as compared with the other subtypes (19,20). Recently, WWOX expression was reported to be frequently reduced in basal-like breast cancers; similarly decreased WWOX expression is associated with the basal-like subtype and a poor disease-free survival rate for breast cancer patients (7,21). Intriguingly, KLF5 has been found to be overexpressed in basal-like breast cancers (14,16) and contains a PY motif. These reports prompted us to consider the connection between WWOX and KLF5, and in this study we demonstrate that WWOX interacts with KLF5 and suppresses the oncogenic functions of KLF5 in cancers.

The primers 5'-TTGGATCCATGGCAGCGCTGCGCTACGC-3' (forward, BamHI site is underlined) and 5'-ATAAGATGCGGCCGCTTAGCCGGACTGGCTGCCAAG-3' (reverse, NotI site is underlined) were designed to clone a full length human WWOX gene into the pENTRE vector (Invitrogen). Subsequently, WWOX in pENTRE vector was recombined into the destination vector pSLIK-Neo using the Gateway LR Clonase II Enzyme Mix (Invitrogen). To produce a lentivirus for establishing WWOX-inducible cells, pSLIK-Neo-WWOX and packing plasmids were transfected into HEK293FT packing cells using lipofectamine 2000. Lentiviruses were collected 72 h after transfection and used to transduce TSU-Pr1 and HCC1937 cells in a 6-well plate. The antibiotic G418 (800 µg/mL) was added to select drug-resistant cell populations 48 hours after transduction.

The cell viability was measured by Sulforhodamine B (SRB) assays (24). Briefly, TSU-Pr1 WWOX inducible cells were plated in 24-well plate at a density of 2×104/well. The day after plating, doxcycline was added to induce WWOX expression at a final concentration of 1 µg/mL (25). Cells were then fixed using 10% trichloroacetic acid (TCA) at the designed time, and stained with 0.4% SRB. After dissolving SRB from the available cells using 10 mM unbuffered Tris-base, optical results were read by an automated spectrophotometric plate reader at a single wavelength of 490-530 nm.

Immunoprecipitation (IP) and GST-pull down assays

The full length WWOX gene was cloned into the pcDNA3-3xMyc vector or pcDNA3-Flag vector using the pfu enzymes by PCR and expressed in HEK293T cells in order to detect the interaction between Flag-WWOX (or Myc-WWOX) and KLF5. WWOX constructs for GST-pull down experiments were obtained by subcloning WWOX fragments encoding full length or WW domain-deleted mutants into the BamHI and NotI sites of pEBG vector. The co-IP and GST pull-down experiments have been described in our previous studies (26,27).

Both the SRB and quantitative PCR assays were conducted in triplicate. Where appropriate, the resulting data were pooled to and expressed as means ± standard deviation and analyzed by t-test. P values less than 0.05 were considered to significant.

To test the effects of WWOX on KLF5, we established a Tet-on inducible WWOX expression system in TSU-Pr1 derived bladder cancer cell clone (K12) with stable KLF5 expression (28) and breast cancer cell line HCC1937. As shown in Figure 1, after doxycycline treatment, the expression of WWOX became significantly induced in TSU-Pr1 cells. We noted the induction of WWOX caused a significant decrease of the expression levels of KLF5 and KLF5’s well-characterized direct downstream target gene FGF-BP (13). Similarly, in breast cancer cell line HCC1937, WWOX induction also suppressed the expression of KLF5 and FGF-BP (Figure 2A). To test at what level WWOX regulates KLF5 expression, we performed quantitative PCR to detect the mRNA expression of KLF5. The induction of WWOX did not decrease KLF5 at the transcription level (Figure 2B), suggesting that WWOX may inhibits KLF5 at the post-transcription level, likely at the protein level. Subsequently, we then examined cell viability after WWOX induction and found that WWOX significantly suppressed cell proliferation as compared to the control in TSU-Pr1-K12 cells (Figure 1B).

Since WWOX decreases the protein expression of KLF5, we were curious as to whether there was an interaction between WWOX and KLF5. We over-expressed Flag-WWOX and HA-Klf5 (mouse) in HEK293T cells. We observed that when Flag-WWOX was immunoprecipitated by anti-Flag antibody, the HA-Klf5 protein was detected (Figure 3A). These results suggested that WWOX and KLF5 proteins interact with one another, though the precise mechanisms were not clear. 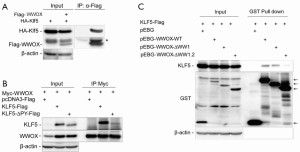 WWOX typically interacts with its partners’ PY motifs through its WW domains. Since KLF5 contains a PY motif (26), we decided to test whether WWOX interacts with KLF5 through the WW domain-PY motif .We first tested if the PY motif was essential for the interaction and found that the wild type human KLF5 interacts with WWOX (Figure 3B), meanwhile KLF5 without the PY motif barely interacted with WWOX. Additionally, we demonstrated that GST-WWOX without both WW domains did not bind to KLF5 as compared to the wild type WWOX (Figure 3C). Interestingly, GST-WWOX without the first WW domain still interacted with KLF5 in the same manner as the wild type GST-WWOX, implicating the second WW domain of WWOX as being responsible for the binding to KLF5.

WWOX and KLF5 are reversely expressed in breast cells 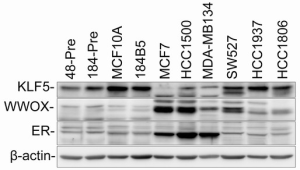 WWOX has been shown to function as a tumor suppressor in a number of cancers, including both breast and bladder cancer (1-3), but the underlying functional mechanisms of WWOX have not been fully explained. In the current study, we demonstrated that WWOX interacts with KLF5 and suppresses KLF5 protein expression at the posttranslational level. Our findings suggest that WWOX may suppress cancer cell proliferation, partially through down-regulating KLF5 expression because KLF5 is a pro-proliferative transcription factor.

The KLF5 protein is tightly regulated by the ubiquitin-proteasome pathway (26). Several WW-domain containing E3 ligases, such as WWP1 and Smurf2, were shown to target KLF5 for ubiquitin-mediated degradation (26,29). In a recent study, we showed that two WW domain containing proteins, YAP and TAZ, interact with KLF5 and blocked WWP1-mediated KLF5 degradation (30,31). WWOX did not regulate KLF5 at the mRNA level (Figure 2) and WWOX interacts with KLF5 through WW-domain and PY motif interaction (Figure 3). It is possible that WWOX recruits other E3 ubiquitin ligases to target KLF5 for ubiquitin-proteasome degradation, which might also be responsible for the reverse expression of WWOX and KLF5 proteins. Though these findings mark some interesting and potentially novel understandings on the relationship between WWOX and KLF5, the precise mechanism by which WWOX decreases the KLF5 protein expression need further investigation.

KLF5 has been reported to be an independent prognosis biomarker in breast cancer because patients with higher KLF5 mRNA expression tend to have a shorter survival than those with lower KLF5 expression (10). Similarly, KLF5 protein levels are higher in basal-like invasive breast cancer cells than those in non-basal-like cancer cells (14,16). In the present study, we found that the WWOX expression is much lower or even undetectable in basal type breast cancer cells (Figure 4). This finding is consistent with observations of patient samples (7,21) indicate that both WWOX and KLF5 may serve as potential molecular biomarkers for basal-type invasive breast cancers. Future studies would be investigating the protein expression of WWOX/KLF5 in a larger number of clinical breast tumor samples by IHC, which may provide clinical support of our preliminary experimental findings.

In summary, we demonstrated that WWOX suppresses the expression of KLF5 and its target gene FGF-BP at the protein level as well as suppressing cancer cell proliferation. We also found that WWOX interacts with KLF5 via WW domain-PY motif. Interestingly, the expression of WWOX was negatively correlated with that of KLF5 in a panel of breast cancer cell lines. These findings may provide rationale for developing WWOX and KLF5 as breast cancer diagnosis or prognosis biomarkers.

We would like to thank Dr. Vincent W. Yang from the Emory University School of Medicine for kindly providing the mouse HA-Klf5 construct, as well as Dr. Kevin Pumiglia from Albany Medical Center for providing empty vectors for generating WWOX inducible cell lines. This study was supported by National Natural Science Foundation of China (81272930, 81322038, 31260208, and U1132605), the Science and Technological Key Project of Yunnan Province (2012FB185) and West Light Foundation of the Chinese Academy of Sciences (to R.L.).