Nasopharyngeal carcinoma (NPC) has unique epidemiological and biological characteristics. While age-standardized incidence rates are generally low across most of the world (<1/100,000), making it a rare cancer among Caucasians from North America and Europe, the rates are relatively high among the Chinese in southern China and Southeast Asia (1,2). In fact, the incidence rate per 100,000 is as high as over 40 among men in the Cantonese-speaking population in Guangdong province, which is the highest in the world (3,4). Familial clustering of NPC has been widely documented in both high- and low-risk regions (5-11). A typical example is the Ye-Liang family in Guangdong province, in which 15 of 109 family members across four generations had NPC (12). The geographic and familial clustering of this particular malignancy suggests that a heritable factor may play an important role in its etiology. It also suggested that the clinical characteristics of NPC may differ between the familial and sporadic types. Previous reports on familial clustering of NPC mainly focus on differences in epidemiological and general clinical characteristics between the familial and sporadic types (13,14), and little is known about the clinical characteristics of familial NPC. Therefore, in the present study, we compared clinical characteristics between familial NPCs and sporadic ones.

We randomly selected cases from NPC patients hospitalized at the Sun Yat-Sen University Cancer Center between January 1991 and December 2001. The enrollment criteria were pathological confirmation of newly diagnosed NPC without distant organ metastasis; only first course of radical radiotherapy (RT) completed; pre-treatment nasopharyngeal CT scanning images available; and residence within Guangdong province. In total, 7,944 NPC patients from Guangdong province were treated at Sun Yat-sen Cancer Center during the study period. Of these, 1,504 patients with combination treatment were excluded, leaving 6,440 patients with RT alone. A total of 1,073 cases were randomly selected from among these 6,440 NPC cases, and every patient’s medical record was reviewed. We further excluded 79 metastasis cases, 41 recurrence cases, and 20 cases with no clear information from NPC-related family history records. Finally, 933 NPC patients who received RT were recruited. Each patient was followed up via medical record examination and telephonic communication, from the date of pathological diagnosis to the date of death, loss to follow-up, or December 31, 2007, whichever occurred first. All patients were staged according to the 1992 Staging System followed in China (15).

Of the 993 patients, 215 received split RT while 672 received continuous conventional RT. The primary tumor was irradiated at a dose of 66-70 Gy. Additional (boost) RT of 8-12 Gy was administered for residual tumors and destructed skull bases. The neck received 50-70 Gy depending on lymph node involvement: 50 Gy was administered in case of node negativity and 60-70 Gy in case of node positivity. A daily fraction of 2.0 Gy and 5 fractions per week were delivered using cobalt-60 or linear accelerator. The standard RT technique involved opposing lateral facio cervical fields to cover the nasopharynx and upper cervical lymphatic drainage region, with 1 lower anterior cervical field to cover the lower cervical region. After 36-40 Gy was administered, opposing lateral preauricular fields were used to cover the nasopharyngeal region. When the nasal cavity or post-styloid area had been invaded, an anterior facial or postauricular field was added as a supplementary field. 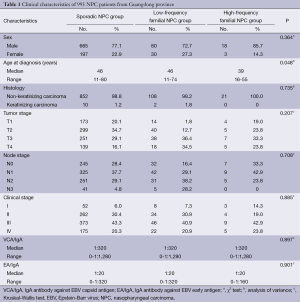 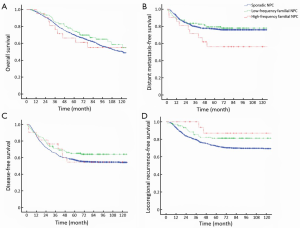 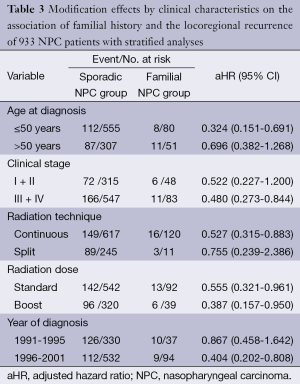 Several studies have confirmed that the incidence of NPC is significantly higher among relatives of the proband than among the general population, and the incidence is higher in high-risk regions (>5%) than in the intermediate-risk and low-risk regions (5-9,12,14). In Taiwan, Ung et al. found no significant difference between familial and sporadic NPC cases in terms of age, ethnicity, disease histology, disease stage, or family history of other malignancies (13). With regard to age, the findings have been inconsistent (12,13,16). In Guangdong province, which is a very high-risk area, Jia et al. found that the average age of patients with familial NPC decreased from 44.48 years to 40.43 years as the number of NPC cases per family increased from one to four (11). Consistent with this finding, our results showed that the median age of the high-frequency familial NPC patients was significantly lower than that of low-frequency familial and sporadic NPC patients, although other factors did not differ significantly among the three groups. We assume the reason for these results is that all groups of patients were from Guangdong province, the area with the highest risk of NPC in the world, and have the same clinical characteristics, which are however different from those of patients from low-risk areas. Although the etiology of NPC is considered multi-factorial, that is, a combination of genetic susceptibility and environmental factors involving EBV infection (3,4,17,18), we believe that genetic factors may play a more important role in NPC etiology in high-frequency familial NPCs in high risk areas, resulting in an earlier age of onset (19,20).

We also compared differences in prognosis between the sporadic and familial NPC cases in the present study. As the number of NPC cases among the relatives of the probands increased, the LRFS tended to improve. Additionally, we performed a multivariate analysis on the prognostic risk factors of NPC and found that only family history of NPC had a significant effect on LRFS. This result suggested that familial NPC was a distinguished subset of NPC with RT-sensitive characteristics.In the present study, familial NPC was not found to have a significant effect on DMFS, DFS, or OS, which contradicts the findings of Ouyang et al. (21). This may be because all patients in this cohort only underwent RT, while in the study of Ouyang et al., almost all advanced NPC patients were administered comprehensive treatment with RT combined with chemotherapy. Besides recurrence, the main cause of treatment failure for NPC is distant metastasis. Some studies have shown that concurrent chemoradiotherapy can reinforce local control and control the micrometastasis (22,23). Familial NPC patients who are sensitive to RT may also respond to radiotherapy or chemotherapy, and better treatment results may be obtained in such cases than those in sporadic NPC cases. Using stratification analysis, we showed that the low recurrence rates in familial NPCs were mainly limited to young (<50 years) patients with advanced clinical disease stages (stage III and IV). This finding may explain the high proportion of young and late-stage patients among familial NPC patients. Another explanation may be that the differences in biological characteristics characteristic between familial and sporadic NPCs are more apparent in advanced-stage patients. We also performed stratification analysis by diagnostic time and treatment factors (i.e., the year of diagnosis, radiation technique, and radiation dose) and found that LRFS among familial NPCs cases was mainly improved in patients who received continuous treatment in the late years [1996-2001] of the study period. These findings suggested that primary familial NPCs may be more sensitive to RT than sporadic cases and that continues RT may promote tumor control in the case of familial NPC.

Our study has some limitations. First, the sample size was relatively small, which restricted interaction analysis between family history and other factors related to NPC progression. Second, all patients included in the study had received RT alone, because of which evaluation the effects of combined treatment on the progression of familial NPCs could not be evaluated. Prospective studies that also examine the effects of combination therapy on survival rates in familial NPC patients are necessary to confirm our findings and to shed light on the underlying mechanisms.

We are deeply indebted to the medical staff of the Departments of Nasopharyngeal Carcinoma, Radiation Oncology and Information Technology, Sun Yat-Sen University Cancer Center. We thank Zhiqiang Li, Zhijie Xiao, Zhiwei Liu and Wei Yi for helping with collection of medical information and follow-up data. This work was supported by the National High Technology Research and Development Program of China (No. 2006AA02Z4B4).