Annual report on status of cancer in China, 2011

Cancer is a major public health issue in China. It was the second leading cause of death, and the incidence and mortality keep increasing (1-3). In 2008, the national program of cancer registry was launched by the Ministry of Health of China. Since then, National Central Cancer Registry (NCCR) of China has been publishing cancer statistics annually based on registries’ data (4). In this article, we analyzed the cancer incidence and mortality in cancer registration areas in 2011 and estimated the numbers of new cancer cases and deaths nationally to provide an overview of current cancer statistics using data collected from local registries. The updated cancer burden results would be broadly used by government, researchers and clinicians for policy and research.

The NCCR is responsible for cancer data collection, evaluation and publication from local population-based cancer registries. The cancer information was reported to the cancer registries from local hospitals, and community health centers, including the Basic Medical Insurances for Urban Residents and the New-Rural Cooperative Medical System. The Vital Statistical Database was linked with the cancer incidence database for identifying cases with death certificate only (DCO) and follow-up. By 1 June 2014, 234 cancer registries (98 cities and 136 counties) from 31 provinces submitted 2011 data to the NCCR. Data covered about 221,390,275 people, accounting for about 16.43% of the national population. All cancer cases were classified according to the International Classification of Diseases for Oncology, 3rd edition (ICD-O-3) and the International Statistical Classification of Diseases and Related Health Problems 10th Revision (ICD-10). Invasive cases of lung cancer (ICD10: C33-C34) were extracted and analyzed from the overall cancer database. Incidence and mortality [2011] were based on data from 177 population-based cancer registries which distributed in 28 provinces (77 in urban and 100 in rural areas) and covered a total of 175,310,169 populations (98,341,507 in urban and 76,968,662 in rural areas) including 88,655,668 males and 86,654,501 females, accounting for 13.01% of the national population (Figure 1). 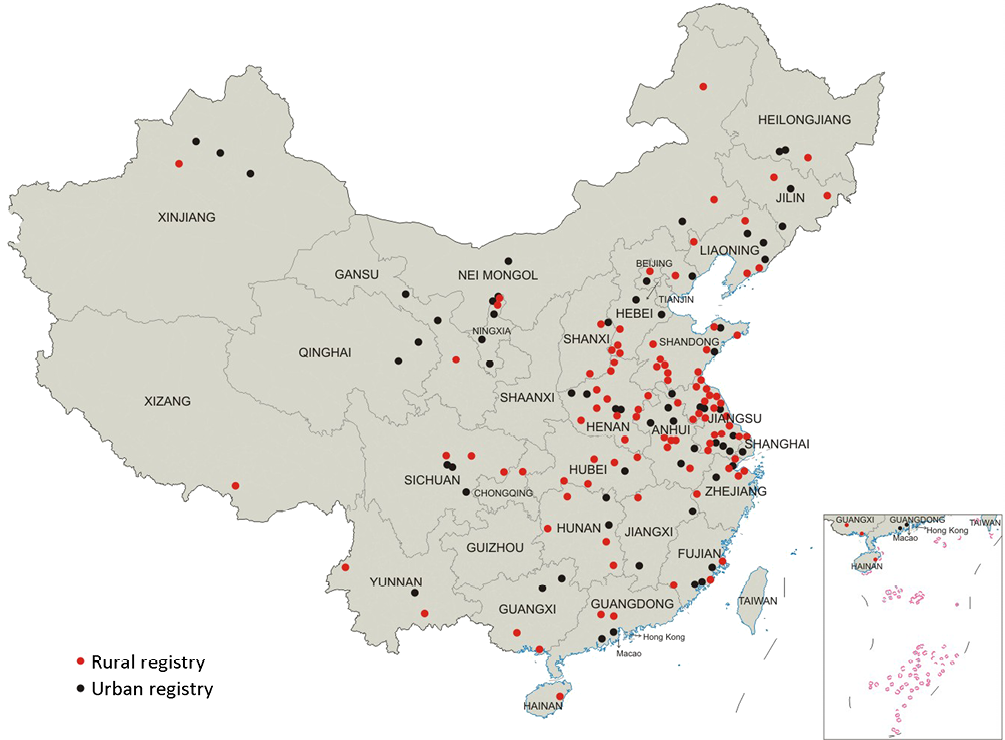 The national population in 2011 was estimated based on the 5th National Population Census data [2000] provided by the National Statistics Bureau of China, taking into account of the changes of age composition, gender ratio and the proportion of urban and rural transformation released by the National Bureau of Statistics (http://data.stats.gov.cn/). The national population in 2011 was stratified by area (urban/rural), gender (male/female) and age groups (0-, 1-4, 5-84 by 5 years, 85+ years). The changes of age-specific death probability were also adjusted when calculating population. Linear changes were assumed in each age group between the fifth and sixth Population Censuses.

Submitted data were checked and evaluated by NCCR based on “Guideline for Chinese Cancer Registration” and referring to relevant data quality criterion of “Cancer Incidence in Five Continents Volume IX” by IARC/IACR (5). Software such as MS-FoxPro, MS-Excel and ICRC/IACR tools IARC-crgTools was used for data collection, sorting, checking and evaluation. Proportion of morphological verification (MV%), percentage of cancer cases identified with death certification only (DCO%), mortality to incidence ratio (M/I), percentage of uncertified cancer (UB%) and percentage of cancer with undefined or unknown primary site (secondary) (O&U%) were used to evaluate the completeness, validity and reliability of cancer statistics.

Incidence and mortality rates were calculated by area, gender and age groups. The numbers of new cases and deaths were estimated using the 5-year age-specific cancer incidence/mortality rates and the corresponding populations. The Chinese population in 2000 and World Segi’s population were used for age-standardized rates. The cumulative risk of developing or dying from cancer before 75 years of age (in the absence of competing causes of death) was calculated and presented as a percentage. Software including MS-Excel, IARCcrgTools2.05 issued by IARC and IACR was used for data checking and evaluation (6). SAS software (SAS Institute Inc., Cary, USA) was used to calculate the incidence and mortality rates. 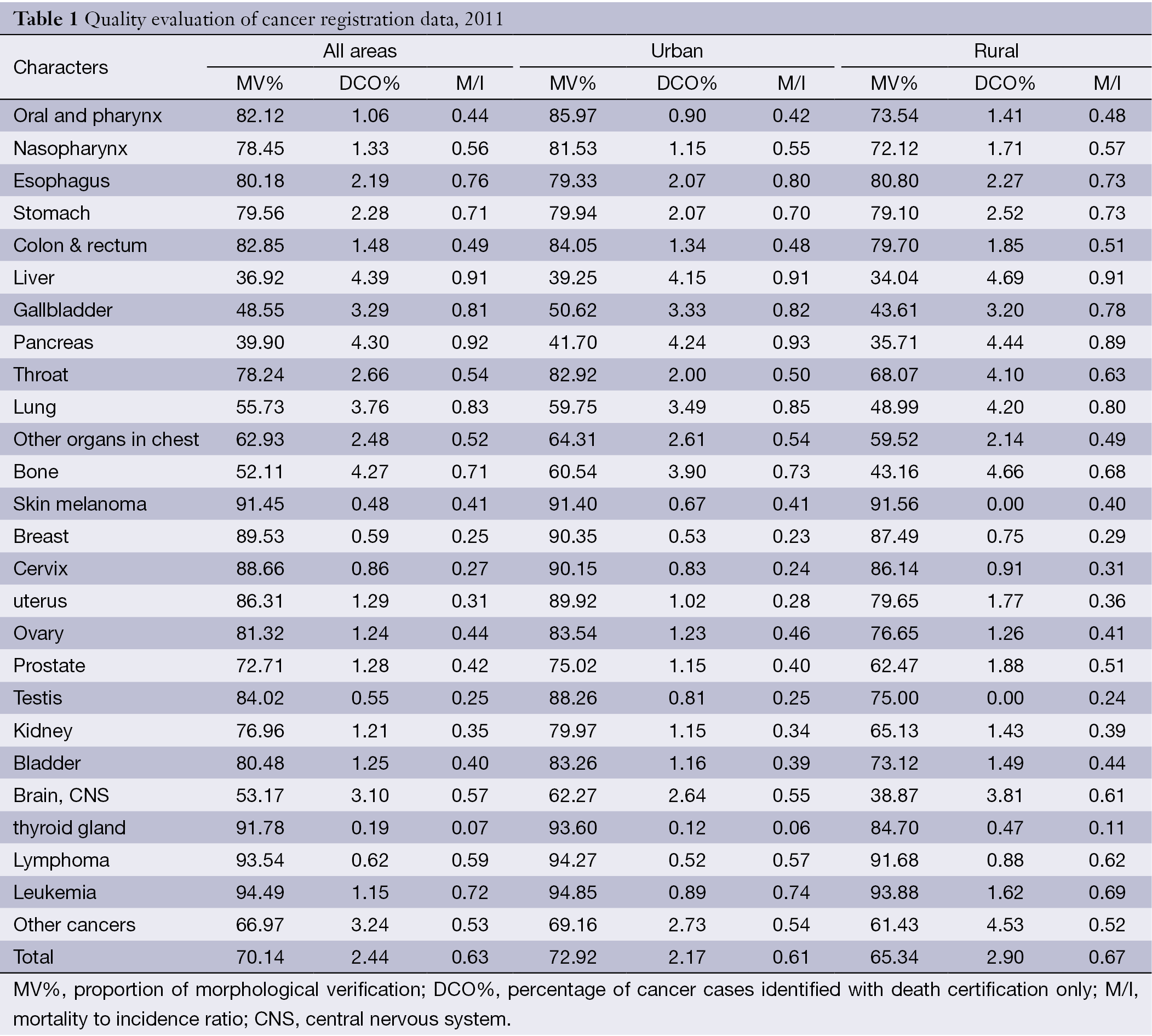 It was estimated there were 3,372,175 new cases diagnosed as cancer in 2011. The crude incidence rate of all cancers was 250.28/100,000 (277.77/100,000 in males and 221.37/100,000 in females). The age-standardized incidence rates were 186.34/100,000 and 181.49/100,000 by Chinese population (ASIRC) and World population (ASIRW), respectively. Among the patients aged 0-74 years, the cumulative incidence rate was 21.28%. The crude cancer incidences rate and age-standardized rates in urban areas were higher than that of rural areas. The crude incidences in males and females were higher in urban than in rural. However, after adjusted by age, cancer incidences for males in urban and rural areas were conversed. More new cancer cases occurred in eastern areas than middle areas and western areas, however, crude incidence rates in three areas were not great different (Table 2). 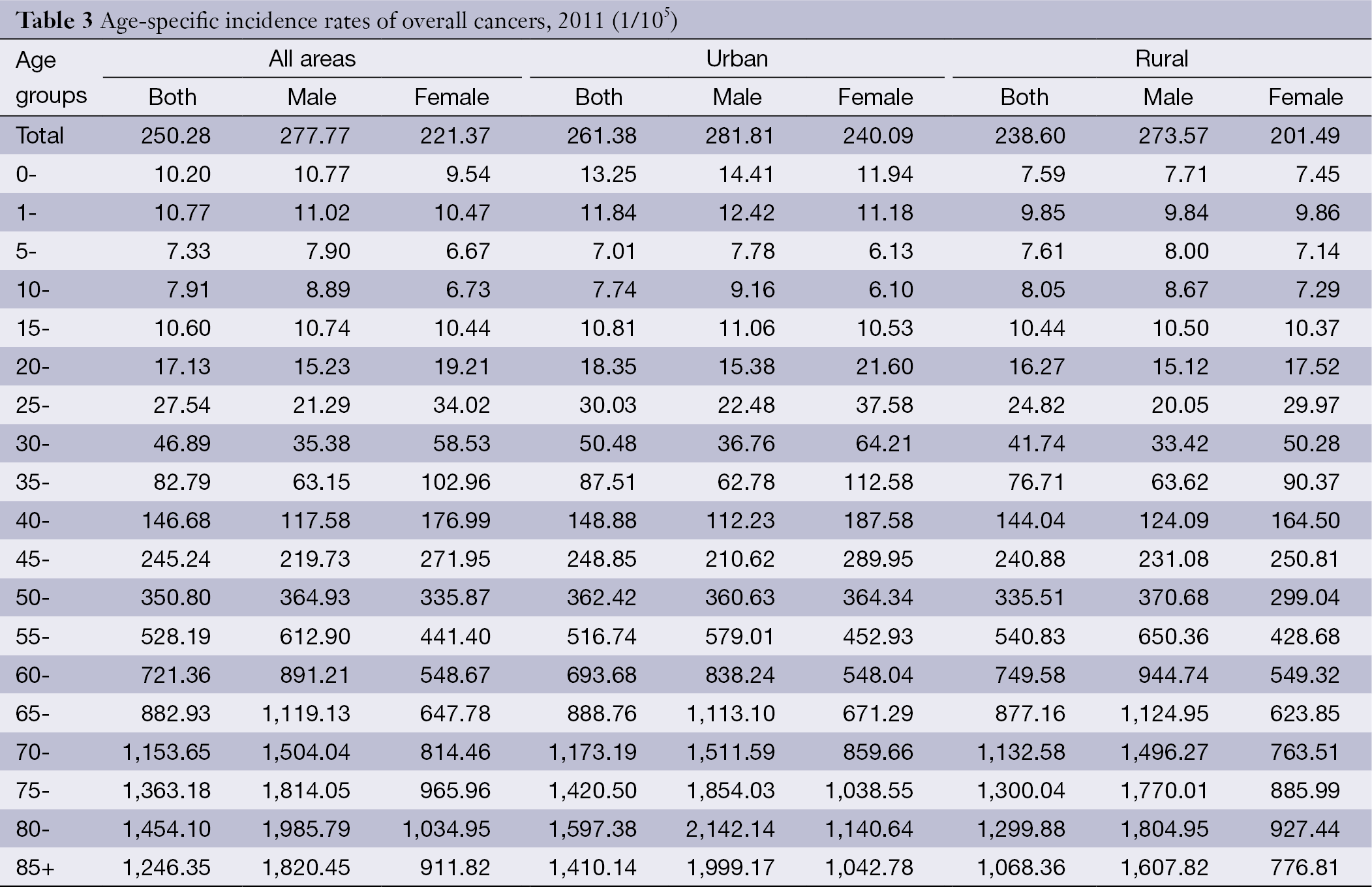 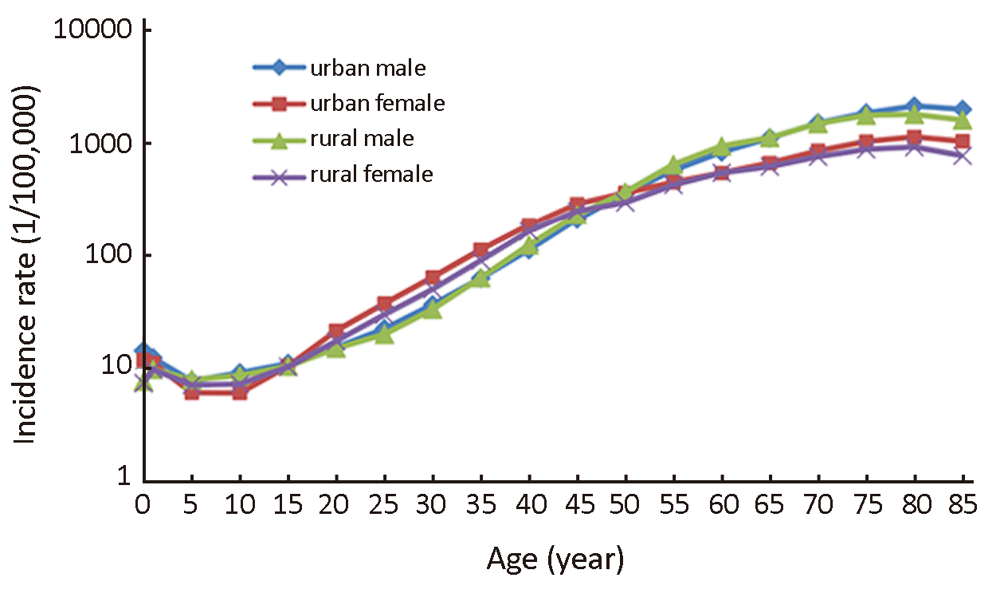 It was estimated there were 2,113,048 died from cancer in 2011. The crude mortality of all cancers in China was 156.83/100,000 (194.88/100,000 in males and 116.81/100,000 in females). The age-standardized mortalities were 112.88/100,000 and 111.82/100,000 by Chinese population (ASMRC) and World population (ASMRW), respectively. Among the patients aged 0-74 years, the cumulative incidence rate was 12.69%. The crude cancer mortality rate and age-standardized rates in urban areas was higher than that in rural areas. The crude cancer mortalities were higher in urban than in rural, however, after adjusted by age, the mortalities were conversed both in male and female. More cancer deaths occurred in eastern areas than middle areas and western areas, however, western areas had higher mortalities than eastern and middle areas (Table 4). 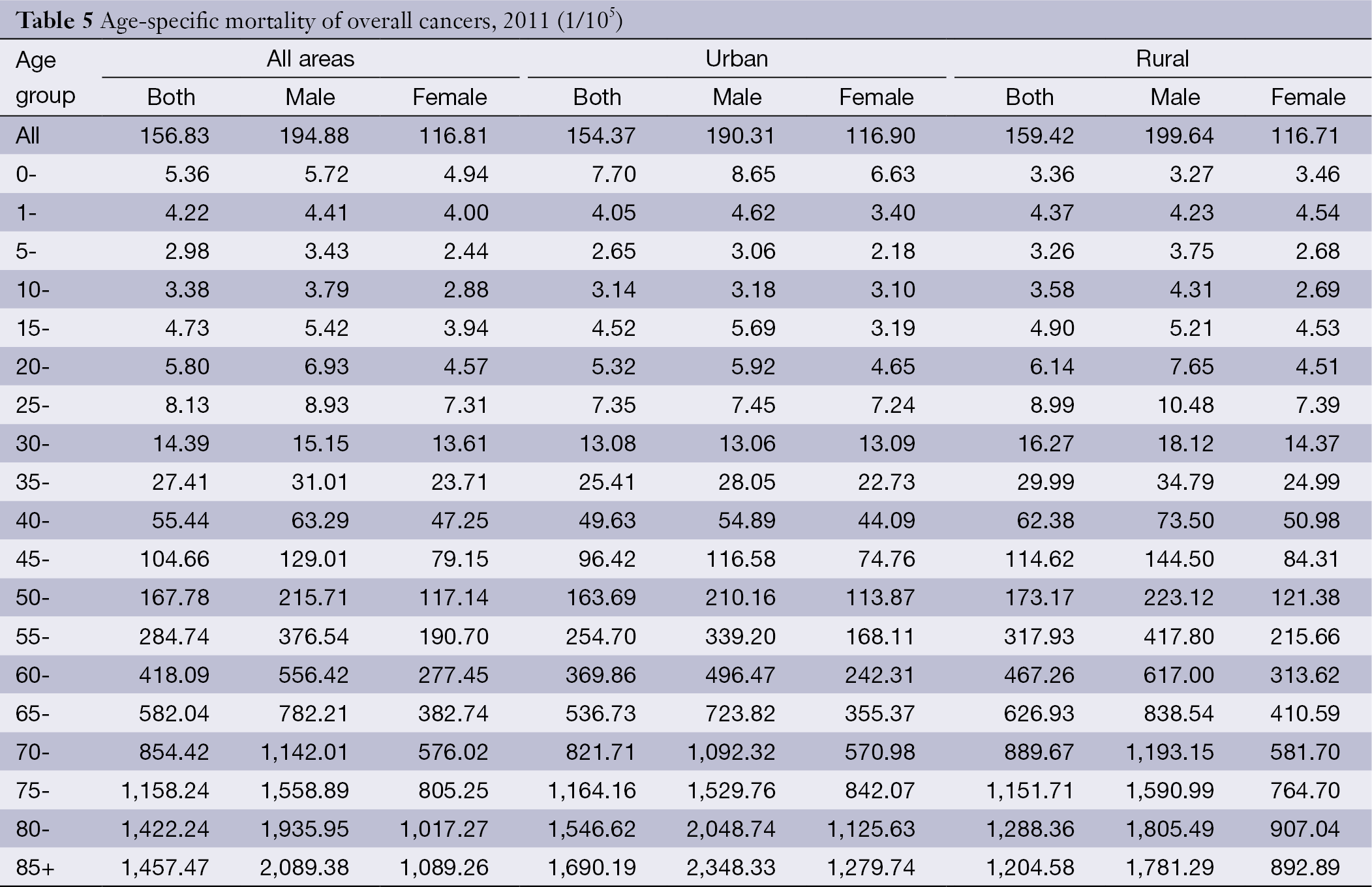 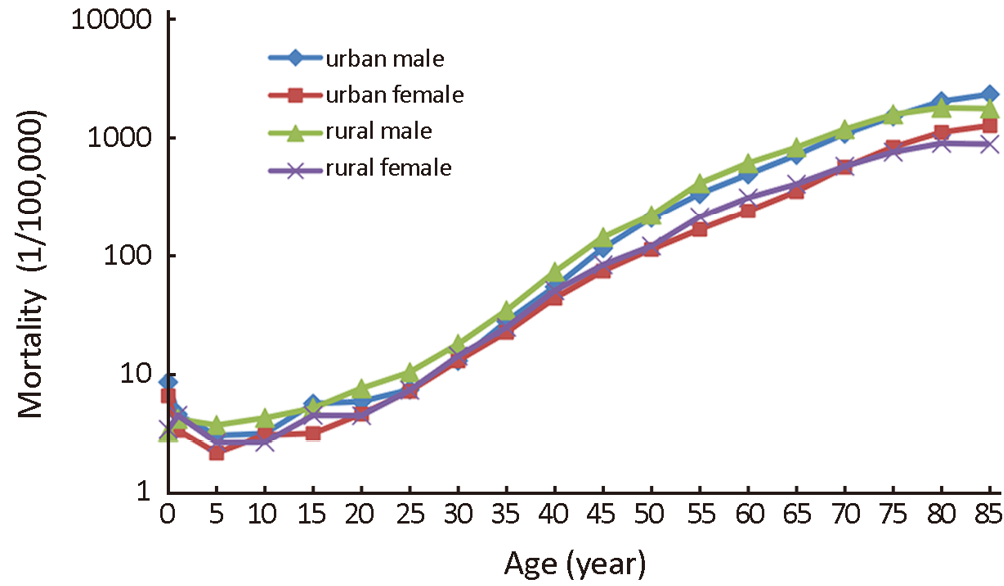 In urban areas, lung cancer was the most frequently diagnosed cancers, followed by female breast cancer, colorectal cancer, stomach cancer and liver cancer with the estimated new cases of 341,543, 158,087, 195,117, 192,913 and 164,528, respectively. The most common sites of cancer were lung, stomach, liver, colon-rectum and esophagus in males, while in females, cancers of breast, lung, colon-rectum, stomach and thyroid were the most common (Table 8).

Lung cancer was the leading cause of cancer death in urban areas for both males and females with number of deaths and mortalities of 192,074, 52.47/100,000 and 88,927, 26.29/100,000, respectively. Other cancer types with high mortality in males were liver cancer, stomach cancer, esophageal cancer and colorectal cancer. In females, stomach cancer was the second cause of cancer death, followed by colorectal cancer, liver cancer and breast cancer (Table 9).

Table 10 shows the 10 most common cancer incidence rates in rural areas. Lung cancer has been becoming the most frequently diagnosed cancers (309,510 new cases with incidence rate of 47.14/100,000), followed by stomach cancer, esophagus cancer, liver cancer and female breast cancer. The most common sites of cancer in males were lung, stomach, liver, esophagus, and colon-rectum, while in females, they were cancers of lung, breast, stomach, esophagus and liver (Table 10).

Lung cancer was the leading cause of cancer death in rural areas for both males and females. The number of deaths on lung cancer in rural was 248,152 with mortality of 37.80/100,000. The other cancer types with high mortality were liver cancer, stomach cancer, esophageal cancer and colorectal cancer in males; stomach cancer, liver cancer, esophageal cancer and breast cancer in females (Table 11).

Population-based cancer registry in China collects the information on cancer incident cases and cancer deaths from covered population to surveillance the cancer epidemics in certain areas. The cancer registration data are not only applied for cancer control planning, implementation and evaluation on cancer prevention and control, but also for scientific research (7).

In mid of 2014, the NCCR called for data submission in 2011 from all registries supported by national program of cancer registry. Total 234 registries reported registration data including national registries and some provincial registries. The population coverage of all registries was over 221 million, accounting for 16.4% of national populations. Stringent quality control is essential based on the national criteria issued in program protocol to ensure the data reliability. The incidence, mortality and population from a same registry have to keep reasonable levels compared to past data. The indicators of completeness, comparability and invalidity, such as MV%, DCO%, M/I ratio, UB% and O&U%, were evaluated for every registry’s data to judge if submitted data is valid or not. If any logical errors, inexplicable incidence, or mortality, the data would be sent back to registries to check and correct. Through the double evaluations in provincial and national level, 177 registries were qualified and accepted for final pooled database, which was used for cancer statistics in 2011. The population was estimated based on the fifth National Population Census data in 2000 released by the National Bureau of Statistics, and the changes of age construction, gender ratio, the extent of urbanization level and age specific death probability were taken into account (http://data.stats.gov.cn/). The national population and registries’ data in 2011 stratified by area (urban/rural), gender (male/female) and age groups were used for estimates of national cancer new cases and cancer deaths. In the annual report of 2010, the national population from the sixth Population Census was used for estimation, which residential population was registered (4). However, the household population is considered to be more suitable because the cancer data are based on the household registration.

It was estimated that cancer incident new cases were 3.37 million and 2.11 million died in cancer all over the country in 2011 with the incidence rate of 250.28/100,000 and mortality of 156.83/100,000. Compared to the figures in 2010, there were 280 thousands and 150 thousands more on cancer new cases and deaths with 6.4% and 5.4% increases of incidence rate and mortality due to the different population mentioned before. After adjusted by age, the incidence and mortality were kept stable. Therefore, the cancer statistics in 2011 were reasonable and creditable. There are still few registries in the west due to the low population density. The western region would be the emphasis for building new cancer registries to meet the requirement of the national and regional representativeness of cancer registry (8).

Urban areas in China had a higher cancer incidence and lower mortality than those in rural areas and the cancer patterns are quite different (2,3). Recent study showed the differences narrowed (9,10). Lung cancer becomes the most common cancer in rural areas instead of stomach cancer. The reason might be high prevalence of tobacco smoking (11) and the air pollution due to the rapid development of urbanization and industrialization (12). A population-based cancer survival study displayed that rural China had a much low relative 5-year survival rate compared with urban China (13,14). This could be explained by limited medical resources, low level of cancer cares and more patients with late stage of cancers. The government should notice the differences between urban and rural areas and implement effective measurement to bridge the gap.

Cancers from upper digestive organ are still the more common cancers and cancer deaths in China, and the incidences of lung cancer, breast cancer and colorectal cancer are increasing. Thyroid cancer had ranked the eighth frequent cancer in China and fifth in urban females that needs to be noticed. The improvement of diagnosis might be the key reason, but the further etiological study is necessary.

In 2014, the number of registries has been increased to 308, covering 300 millions of population. An extra budget was settled to support follow-up and survival analysis from 2014. The registration data would be getting more valuable and play an important role on cancer control. The National Cancer Center launched a project of cancer atlas, which would provide useful information about geographic distribution of cancer to make national cancer control program more efficient.

We gratefully acknowledged the cooperation of all the population-based cancer registries in providing cancer statistics, data collection, sorting, verification and database creation. The authors assumed full responsibility for analyses and interpretation of these data.