The NCCR is responsible for cancer data collection, evaluation and publication from local population-based cancer registries. The cancer information was reported to the cancer registries from local hospitals and community health centers, including the Basic Medical Insurances for urban residents and the New-Rural Cooperative Medical System. The Vital Statistical Database was linked with the cancer incidence database for identifying cases with death certificate only (DCO) and follow-up. By June 1, 2014, 234 cancer registries (98 cities and 136 counties) from 31 provinces submitted 2011 data to the NCCR. Data covered about 221,390,275, accounting for 16.43% of whole national population in 2011. Among them, there were 177 population-based cancer registries whose data quality met the quality criteria required by NCCR, distributed in 28 provinces (77 in urban and 100 in rural areas), and covered 175,310,169 population accounting for about 13.01% of the whole Chinese population, including 88,655,668 males and 86, 654,501 females, 98,341,507 in urban and 76,968,662 in rural areas. All cancer cases were classified according to the International Classification of Diseases for Oncology, 3rd edition (ICD-O-3) and the International Statistical Classification of Diseases and Related Health Problems 10th Revision (ICD-10). Invasive cases of pancreatic cancer (ICD10: C25) were extracted and analyzed from the overall cancer database.

The population was estimated based on the fifth National Population Census data [2000] provided by the National Statistics Bureau of China, taking into account of the changes of age composition, gender ratio and the proportion of urban and rural transformation released by the National Bureau of Statistics (http://data.stats.gov.cn/). The national populations in 2011 were stratified by area (urban/rural), gender (male/female) and age groups (0-, 1-4, 5-84 by 5 years, 85+ years). The changes of age-specific death probability were also adjusted when calculating population. Linear changes were assumed in each age group between the fifth and sixth population census.

According to “Guideline of Chinese Cancer Registration”, we checked the data quality using the inclusion criteria in “Cancer Incidence in Five Continents Volume IX” (4), which was required by the International Association for Cancer Registry (IACR) and the International Agency for Research on Cancer (IARC) (5). We used software including MS-Excel, Statistical Analysis System (SAS) and IARC Tools issued by the IARC/IACR for data check and evaluation. The data were included in the present analysis if they met the following criteria: morphological verification (MV%) higher than 66%, percentage of cancer cases identified with death certification only (DCO%) less than 15%, and mortality to incidence ratio (M/I) between 0.6 and 0.8.

Incidence and mortality rates were calculated by area, gender and age groups. The number of new cases and deaths were estimated using the 5-year age-specific cancer incidence/mortality rates and the corresponding populations. The Chinese population in 2000 and World Segi’s population were used for age-standardized rates. The cumulative risk of developing or dying from cancer before 75 years of age (in the absence of competing causes of death) was calculated and presented as a percentage. Software including MS-Excel and IARCcrgTools2.05 issued by IARC and IACR was used for data checking and evaluation. SAS software (SAS Institute Inc., Cary, USA) was used to calculate the incidence and mortality rates. 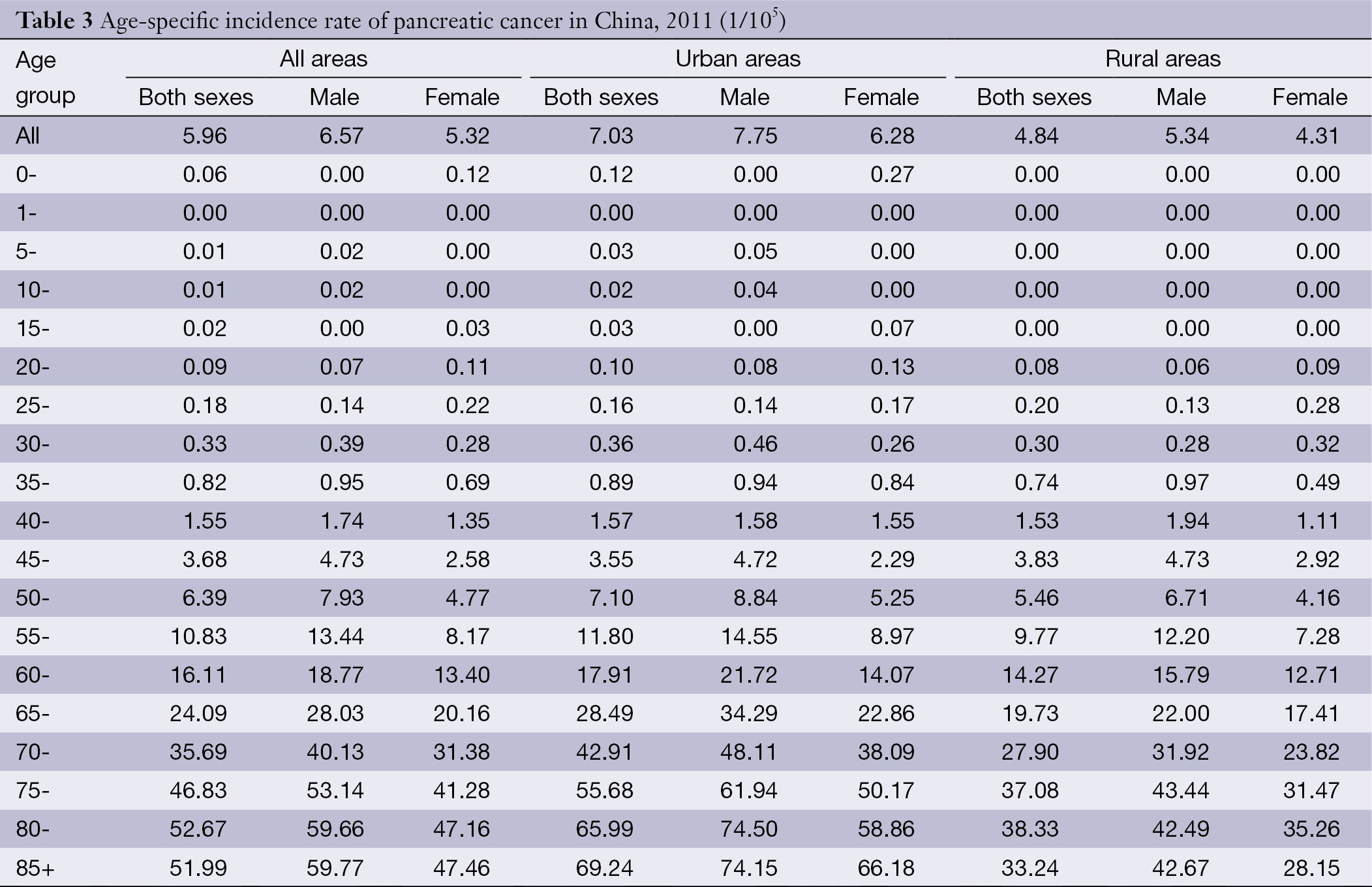 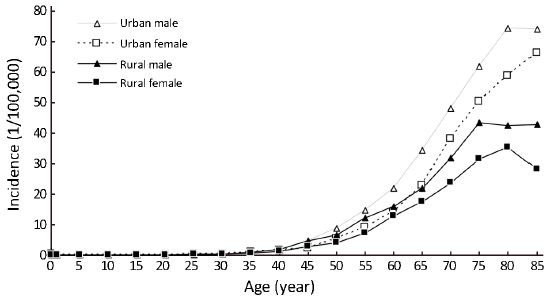 Incidence rates of pancreatic cancer from 2003 to 2011 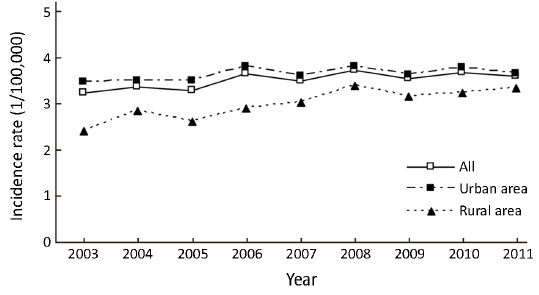 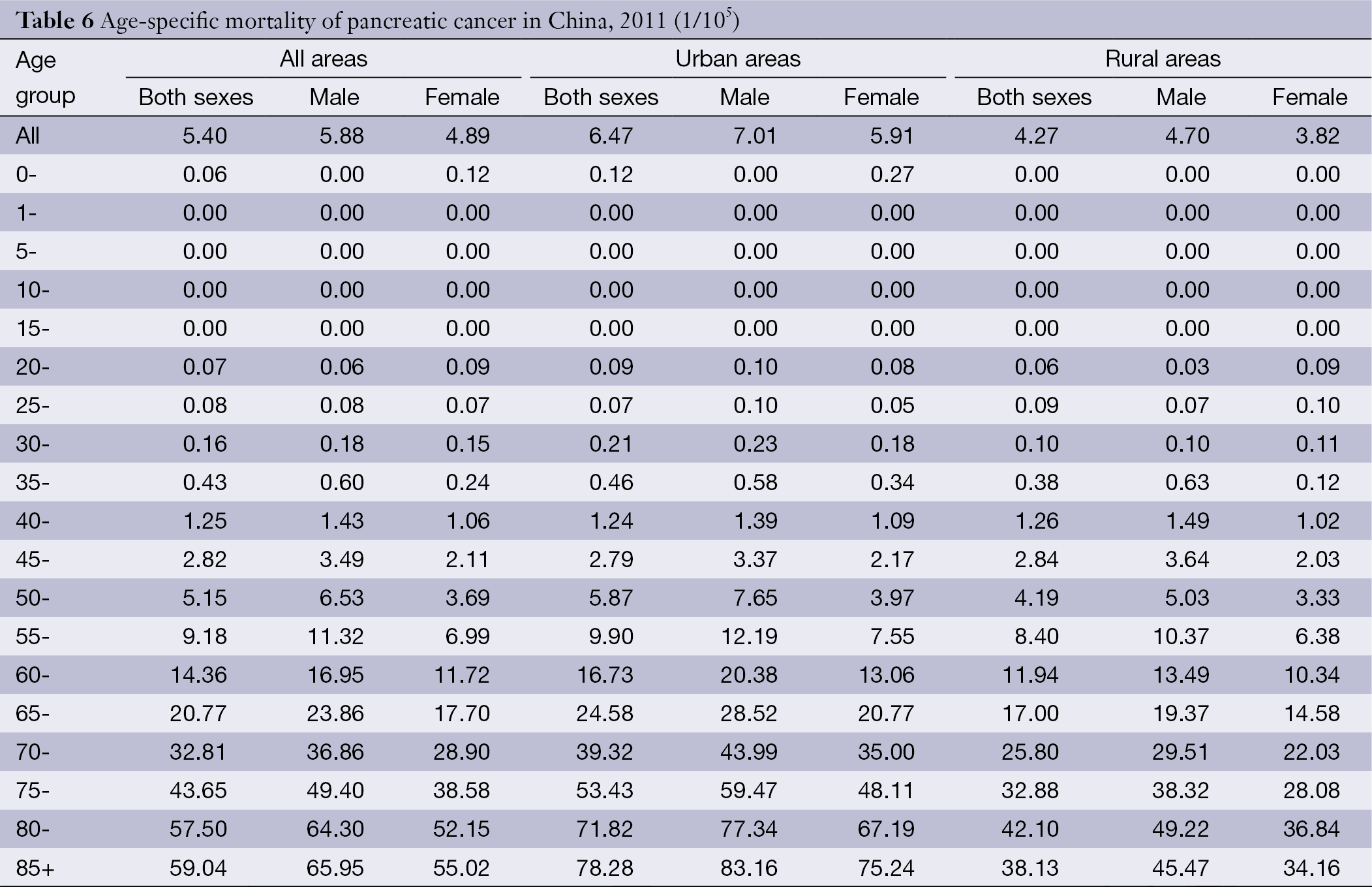 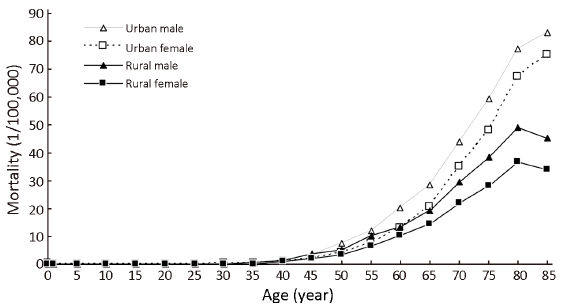 Mortality rates of pancreatic cancer from 2003 to 2011 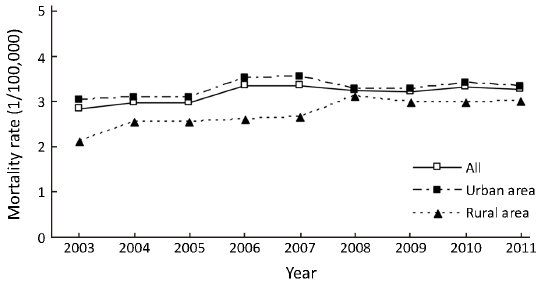 When commenting on our results, some limitations must be kept in mind. Data only covered about 16.43% of whole national population in 2011. But it is a true reflection of the malignant situation.