Non-small-cell lung cancer (NSCLC) accounts for approximately 85% of all newly diagnosed lung cancer. Unfortunately, most patients with NSCLC already have advanced disease at diagnosis. For these patients, chemotherapy represents the standard of care; however, a plateau has been reached with this approach to date. Improvements in the knowledge of tumor biology and mechanisms of oncogenesis have identified epidermal growth factor receptor (EGFR), a member of the ErbB family, as a molecular target for NSCLC treatment (1). Strategies to block EGFR include tyrosine kinase inhibitors, monoclonal antibodies (mAbs), ligand-linked toxins, and antisense approaches (2-4).

Various mAbs against EGFR have been or are currently being tested in preclinical and clinical trials to determine their efficacy as anticancer agents. Cetuximab, an anti-EGFR immunoglobulin G1 mAb, has shown activity when given in combination with cisplatin in preclinical studies. A randomized phase III trial in advanced NSCLC patients yielded a statistically significant survival advantage for patients treated with cetuximab plus chemotherapy versus chemotherapy alone (5). In addition, a retrospective biomarker analysis of this study showed that greater efficacy was observed the patients with high EGFR expression compared to those with low expression of EGFR (6). Nimotuzumab (also known as h-R3) is a humanized anti-EGFR mAb, which is currently under clinical evaluation. In a preclinical study, nimotuzumab showed marked antiproliferative, proapoptotic, and antiangiogenic effects in tumors that overexpress EGFR (7). In early clinical trials, nimotuzumab exhibited a longer half-life and a greater area under the curve (AUC) plasma concentrations in comparison with other anti-EGFR antibodies (8). A phase I/II trial showed that nimotuzumab was well tolerated and could enhance the curative potential of radiation in patients with advanced head and neck cancer (9). Given that little is known of the antitumor activity of nimotuzumab in NSCLC, we investigated the efficacy and safety of this mAb combined with docetaxel in NSCLC patients with EGFR expression.

Design of the study

This was a single-center, open-label, dose-escalating phase I trial of nimotuzumab plus chemotherapy in Chinese NSCLC patients. The patients were treated according to a dose escalation schedule. Ethical approval was obtained from Ethics committee of Beijing Cancer hospital. The study was conducted according to the ethical principles laid down in the Declaration of Helsinki, and was consistent with the ethical Good Clinical Practice Guidelines.

Nimotuzumab (200, 400, and 600 mg) was administered weekly from week 1 to week 3 with chemotherapy (docetaxel 75 mg/m2 every 3 weeks). If tumor control was achieved, nimotuzumab treatment was continued every week until unacceptable toxicity or disease progression occurred. Docetaxel was administered intravenously over 1 hour on day 1 of each cycle, with standard dexamethasone premedication. Each cycle was defined as 21 days, and dose escalation was based on safety data from the first cycle of each cohort. Nimotuzumab was supplied by Biotech Pharmaceutical Co. Ltd. in China. Docetaxel is commercially available (Sanofi-Aventis Pharmaceuticals, Inc.)

Toxicities were graded according to the National Cancer Institute Common Terminology Criteria for Adverse Events (NCI CTCAE) version 3.0. To be considered dose limiting, toxicity had to occur during the first cycle of therapy, and be deemed at least possibly related to protocol treatment. DLT was defined as any of the following: Grade 4 neutropenia lasting more than 7 days; Grade ≥3 febrile neutropenia; platelet count <25×109/L; thrombocytopenia resulting in Grade ≥2 hemorrhage; Grade ≥3 infection with Grade ≥3 neutropenia (<1.0×109/L); Grade 3 or 4 non-hematologic toxicity except alopecia, nausea, emesis, diarrhea (unless persistent despite preventive therapy); and inability to administer the combination therapy on day 1 of cycle 2 within 2 weeks after completing previous cycle.

All patients provided their written informed consent. Patients with histological or cytological confirmed advanced (stage IV) NSCLC and immunohistochemically evidence of positive EGFR expression were eligible for this study. Patients must have had progressive disease after receiving only one prior platinum-based chemotherapy regimen (For the patients who received neoadjuvant chemotherapy or adjuvant chemotherapy, only those surviving disease-free within the past 6 months were eligible to enroll). The last dose of chemotherapy must have been finished at least 3 weeks before the study, and the patients must have recovered from the acute toxicity of chemotherapy. Patients who previously received radiotherapy were eligible for the study. Bone marrow influenced by radiotherapy should have been less than 25% of the total quantity of general bone marrow, and patients could not have received whole pelvis radiation. Previous radiotherapy must have been finished at least 4 weeks before enrollment. Patients must have had at least 1 tumor lesion that could be accurately measured by magnetic resonance imaging (MRI) or computed tomography (CT) in at least one dimension with longest diameter to be recorded as ≥20 mm using conventional techniques or ≥10 mm with spiral CT. Other inclusion criteria included Eastern Cooperative Oncology Group (ECOG) performance status 0–2; life expectancy ≥12 weeks; adequate organ function (bone marrow: absolute neutrophil count ≥1.5×109/L, platelet count ≥100×109/L, hemoglobin ≥90 g/L; liver function: bilirubin (BIL) ≤1.5× upper limit of normal (ULN), alkaline phosphatase (ALP), aspartate aminotransferase (AST), and alanine aminotransferase (ALT) ≤2.5× ULN or ≤5 ULN (Liver metastasis); renal function: creatinine clearance rate (CCR) ≥60 mL/min); no history of clinically significant or uncontrolled cardiac disease; and normal electrocardiogram (ECG). In addition, patients of both genders were required to use effective contraceptive methods during and 3 months after the end of the study. Female subjects must not have been breastfeeding, and serum or urine pregnancy test should have been negative. Signed informed consent must have been attained and submitted to the organization of research.

Adverse events were evaluated using NCI CTCAE, version 3.0. Toxicity assessments were made weekly during the induction period, and then every other week. Treatment response was evaluated after 8 weeks of treatment by CT, and then every 2 months using the Response Evaluation Criteria for Solid Tumors (RECIST) thereafter. DCR (which includes the complete and partial response, plus stable disease) was also assessed. The “response” refers to the best response recorded from the start to the end of the study. Survival analysis was calculated using the Kaplan-Meier estimator.

The safety and efficacy of nimotuzumab (h-R3) combined with docetaxel. There were 12 patients with stage IV NSCLC enrolled in this study. In total, they received 37 cycles of chemotherapy and 244 doses of nimotuzumab, with doses ranging from 200 to 600 mg/week. The patient characteristics are summarized in Tables 1 and 2. Among the 12 patients enrolled, 3 patients finished less than two cycles of chemotherapy due to toxicities and disease progression. The longest administration was 79 weeks at the 200 mg/week dose level. There were eight patients (66.7%) that received nimotuzumab for longer than 16 weeks. 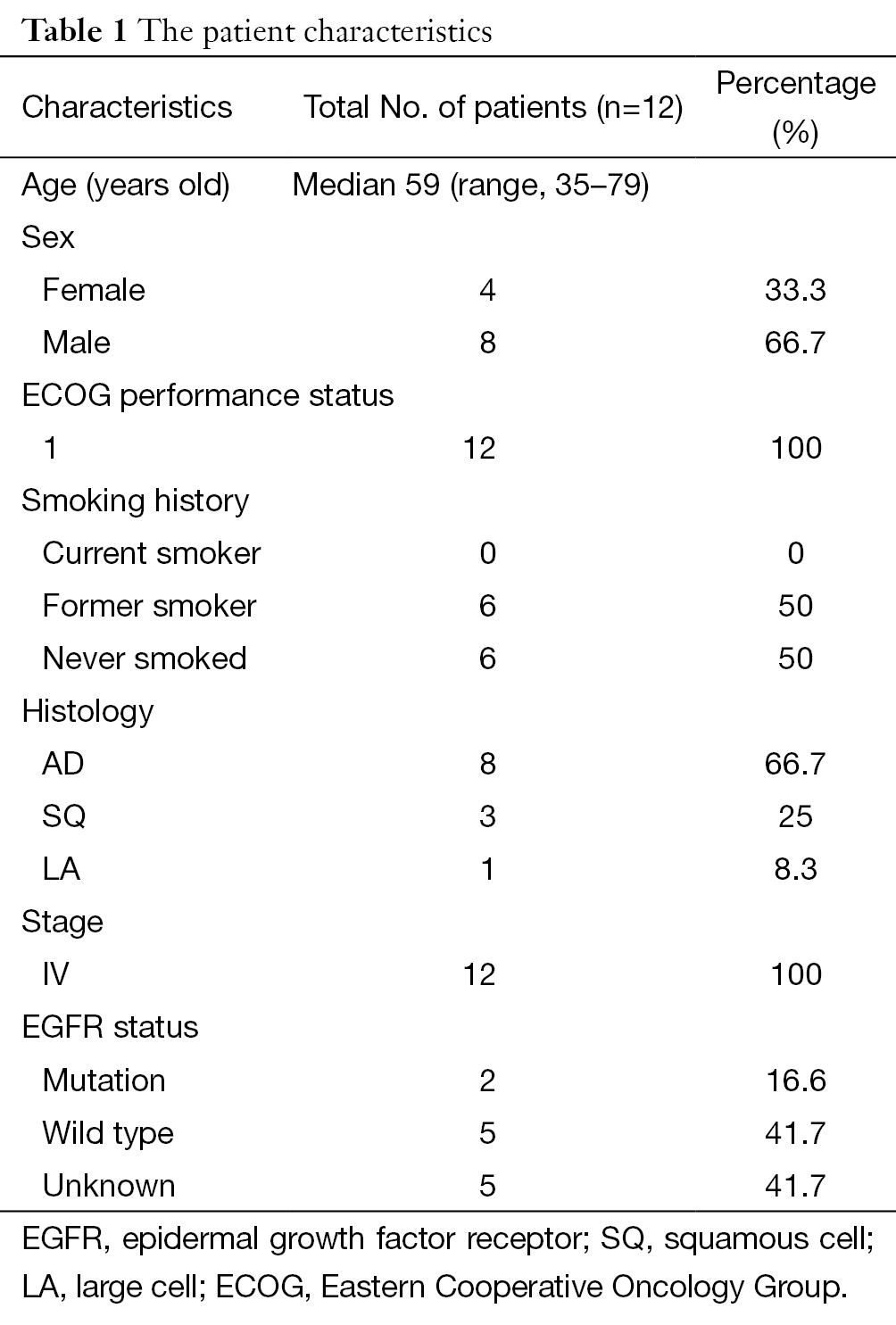 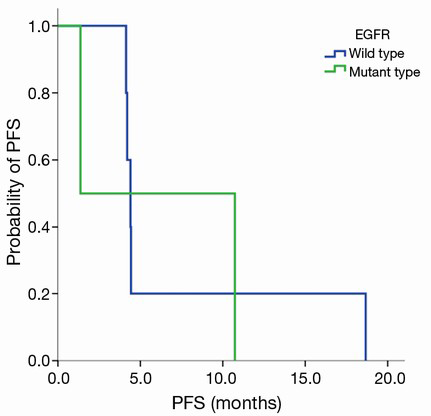 EGFR expression and efficacy of nimotuzumab (h-R3) combined with docetaxel

EGFR expression status was determined in 12 patients. The intensity of cell membrane EGFR staining was classified into four groups (Figure 1). The frequency of staining in all of the samples was 50–75%. High expression was observed in five cases, and medium or low expression was observed in seven cases (Table 2). There was no association between EGFR expression intensity and PFS or overall survial due to nimotuzumab-based treatment (P=0.594, P=0.225) (Figure S3,Figure S4). 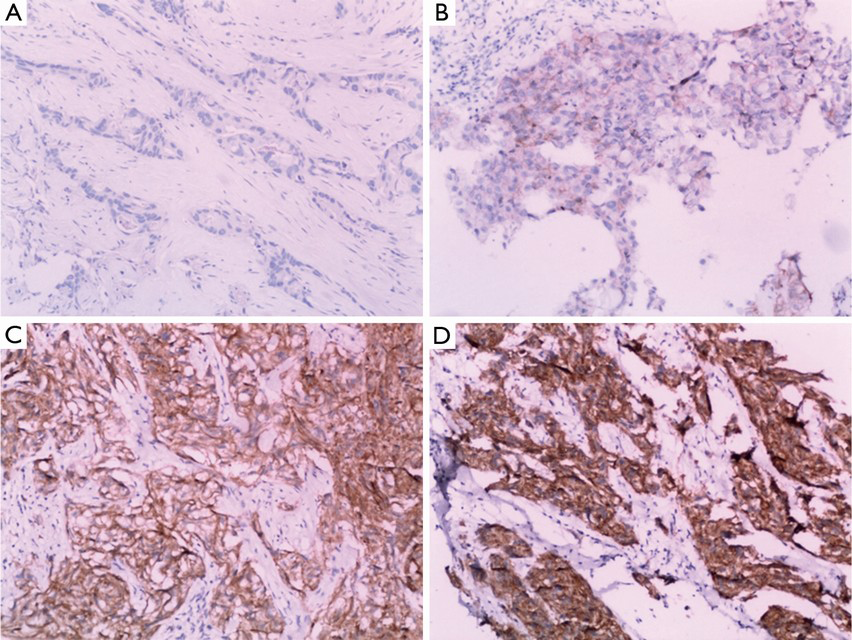 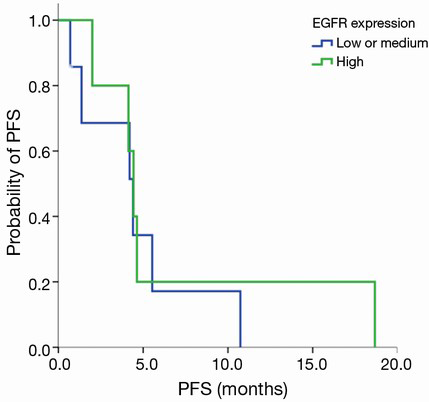 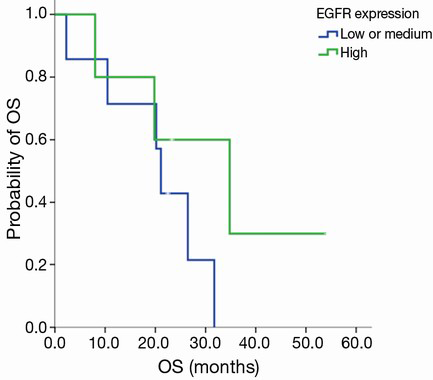 This study demonstrates the tolerability of nimotuzumab combined with chemotherapy in Chinese NSCLC patients. The toxicity profile of the nimotuzumab and docetaxel combination appeared favorable, and complications were mild. Grade III–IV toxicities (accounting for 50% of all adverse events) included neutropenia and fatigue, and other toxicities included rash (occurred in only one patient). DLT occurred with Grade 3 fatigue at the 200 mg dose level of nimotuzumab and Grade 4 neutropenia with pneumonia at the 600 mg dose level of nimotuzumab. Most of toxicities were due to docetaxel, as reported in other studies (10-12). The toxicity and safety of nimotuzumab have been assessed in several pre-clinical and clinical studies, and it is noteworthy that the side effects usually caused by EGFR inhibitors, especially rashes and other skin toxicities, were negligible (13). Scientists have hypothesized that this is because nimotuzumab binds only to cells that express moderate to high levels of EGFR.

Nimotuzumab attaches to EGFR with moderate binding affinity compared with cetuximab, which has a greater than 10-fold higher binding affinity (14). In vitro studies have shown that nimotuzumab binds bivalently (i.e., with both antibody arms to two targets simultaneously) to EGFR with a moderate or high density, which is a stable pattern of attachment (15). In normal tissues with low EGFR density, nimotuzumab has less affinity and binds to EGFR with less avidity, which spares the normal tissues, including skin and mucosa, from severe cytotoxicity. This explains why treatment with nimotuzumab leads to less treatment-related toxicities in clinical applications, while displaying similar or even superior anticancer effects as compared to other anti-EGFR mAbs.

There was a phase II study compared nimotuzumab plus chemotherapy or chemotherapy alone in first line of NSCLC. The objective response rate was significantly higher in the nimotuzumab group than in the control group in the intent-to-treat population (54% vs. 34.5%; P=0.04). No significant differences in PFS and OS were observed. Safety profiles were comparable between the two groups (16). In our study, the combination did not yield objective responses in pre-treated NSCLC patients; stable disease was observed in eight patients (66.7%). This result is consistent with the published literature in the setting of second-line single-agent docetaxel. The lack of objective responses is also consistent with docetaxel therapy, with a historical response rate of only 6% to 9% in the randomized trials of second-line treatment in NSCLC (2,10-12). The median PFS time of combination therapy was 4.4 months, which was better than the previous results of second-line single-agent docetaxel (10-12). Despite the small number of patients recruited and the heterogeneity of disease stages, the results of the nimotuzumab and chemotherapy combination are promising enough to be worthy of further investigation.

It has been shown that some clinical and molecular predictive markers can be used for sensitive selection of NSCLC for EGFR tyrosine kinase inhibitors (EGFR-TKIs), such as adenocarcinoma (AD) histology, the female gender, no history of smoking, East Asian ethnicity, and the presence of EGFR mutations (17). EGFR mAbs, which target the extracellular domain of the receptor, have effects that differ from those of EGFR TKIs. Therefore, the responsiveness to nimotuzumab may be related to the level of EGFR expression rather than to the EGFR mutation. In addition, K-RAS mutations have been identified as predictors of non-responsiveness to EGFR-targeting agents in colon cancer (18). In this study, we could not draw any definitive conclusions because only 12 patients underwent biomarker analysis. Further studies are required to identify the molecular determinants that can influence the activity of nimotuzumab.

In conclusion, nimotuzumab and docetaxel combination therapy was found to be well tolerated and efficacious. Future clinical investigation of nimotuzumab is warranted in NSCLC patients.

We thank all the physicians, nurses, and patients who participated in this study.