Cancer is one of the major non-communicable diseases in China and around the world. It is now the leading cause of death, causing about one fourth of all deaths in China (1). The National Central Cancer Registry (NCCR) is responsible for collecting population-based cancer registration data from local cancer registries for cancer statistics and publishing cancer registry annual report. The cancer registration data are not only widely used for cancer control and decision making, but also for scientific research (2). In this article, we provide a comprehensive overview of cancer incidence and mortality rates, and estimate new cancer cases and cancer deaths in 2012.

The NCCR is a department of National Cancer Center, which is in charge of population-based cancer registry with responsibility of data collection, evaluation and publication from local cancer registries in China. The cancer registration data reported to cancer registries were from local hospitals, community health service centers, the Basic Medical Insurances for Urban Residents and the New-Rural Cooperative Medical System. By 1st June 2015, 261 cancer registries (100 cities and 161 counties) from 31 provinces submitted 2012 data to the NCCR. Data covered about 239,034,428 people, accounting for about 17.65% of the national population at the end of 2012. All cancer cases were classified according to the International Classification of Diseases for Oncology, 3rd edition (ICD-O-3) and the International Statistical Classification of Diseases and Related Health Problems 10th Revision (ICD-10). There were 193 qualified registries finally accepted for the estimation of incidence and mortality in 2012.

The national population in 2012 was estimated based on the 5th National Census data (2000) provided by the National Statistics Bureau of China, taking into account of the changes of age composition, gender ratio and the proportion of urban and rural transformation released by the National Bureau of Statistics (http://data.stats.gov.cn/). The national population in 2012 was stratified by area (urban/rural), gender (male/female) and age groups (0−, 1–4, 5–84 by 5 years, 85+ years). The age-specific death probability was adjusted referring to the Six National Census in 2010. Linear changes were assumed in each age group between the fifth and sixth Population Census.

The NCCR checked and evaluated the quality and comparability of submitted data based on “Guideline for Chinese Cancer Registration” and referring to relevant data quality criterion of “Cancer Incidence in Five Continents Volume IX” by International Agency for Research on Cancer/International Association of Cancer Registries (IARC/IACR) (3). The data included in the final analysis should meet the following criteria: the percentage of cases morphologically verified (MV) (%) was not lower than 66%, the percentage of death certificate-only cases (DCO) (%) was lower than 15%, the mortality to incidence ratio (M/I) was between 0.6 and 0.8, and the percentage of the diagnosis of unknown basis (UB) (%) was lower than 5%.

Incidence and mortality rates were calculated by area, gender and age groups. The number of new cases and deaths were estimated using the 5-year age-specific cancer incidence/mortality rates and the corresponding populations. The Chinese population in 2000 and World Segi’s population were used for age-standardized rates. The cumulative risk of developing or dying from cancer before 75 years of age (in the absence of competing causes of death) was calculated and presented as a percentage. Software including MS-Excel, IARCcrgTools2.05 issued by IARC and IACR were used for data checking and evaluation (4). SAS software (SAS Institute Inc., Cary, USA) was used to calculate the incidence and mortality rates. 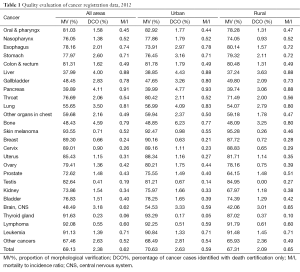 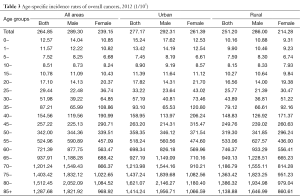 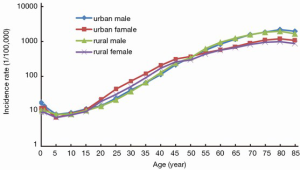 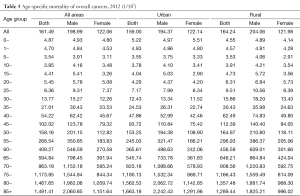 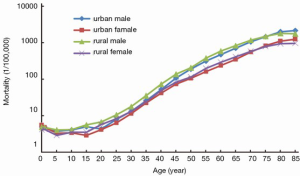 Cancer death of the top 10 cancers

In urban areas, lung cancer was the most frequently diagnosed cancers, followed by colorectal cancer, stomach cancer, female breast cancer and liver cancer with the estimated new cases of 378,200, 210,800, 197,700, 180,600 and 171,900, respectively. The most common sites of cancer were lung, stomach, liver, colon-rectum and esophagus in males, while in females, cancers of breast, lung, colon-rectum, thyroid and stomach were the most common cancers (Table 8).

Cancer death of the top 10 cancers in urban areas

Lung cancer was the leading cause of cancer death in urban areas for both males and females with estimated number of deaths of 208,500 and 100,900, respectively. Other cancer types with high mortality in males were liver cancer, stomach cancer, colorectal cancer and esophageal cancer. In females, stomach cancer was the second cause of cancer death, followed by colorectal cancer, liver cancer and breast cancer (Table 9).

Table 10 shows the 10 most common cancer incidence rate in rural areas. Lung cancer was the most frequently diagnosed cancers with estimated new cases of 326,600 and incidence rate of 50.86/100,000, followed by stomach cancer, esophageal cancer, liver cancer, and colorectal cancer. The most common sites of cancer in males were lung, stomach, liver, esophagus and colon-rectum, while in females, they were lung cancer, breast cancer, stomach cancer, esophageal cancer and colorectal cancer (Table 10).

Cancer death of the top 10 cancers in rural areas

Since 2006, NCCR of China has been publishing cancer statistics annually based on registries’ data. The updated cancer statistics published every year are important for observing the changes of cancer rates and useful to make instructions on cancer prevention and control.

In 2015, 261 cancer registries submitted registration data to the NCCR as usual, which were 27 more compared to that in 2011 (5). The population coverage of all registries was about 239 million, accounting for 17.6% of national populations. In order to ensure the reliability of cancer registration data, stringent quality control process is used based on the national criteria issued in program protocol. The incidence, mortality and population from a same registry have to keep reasonable levels compared to past data. If the data are uncompleted, inexplicable or illogical, they would be sent back to the registries for check and modification. The indicators of completeness, comparability and invalidity, such as, MV%, DCO%, MI ratio, UB% and percentage of cancer with undefined or unknown primary site (secondary) (O&U%) were evaluated for each registry’s data to judge if submitted data are valid or not. There were 193 registries’ data qualified for the update cancer incidence and mortality in 2012. They distributed in 29 provinces, autonomous regions and municipalities, and covered 14.63% of the national population at the end of 2012.

The estimated new cancer cases and deaths were 3.59 million and 2.19 million in 2012, respectively. Compared to the data in 2011, crude incidence and mortality rates were higher in 2012, after adjusted by age, incidence rate was still higher, however, mortality rate was slightly lower than that in 2011 (5). As a basic measure to monitor cancer information, cancer registration in China has been making a great progress in recent years (6). There were 27 more registries submitted cancer data to NCCR and 16 more qualified registries accepted for final analysis compared to 2011.

China had higher incidence rate and lower mortality rate in urban areas than that in rural areas and cancer patterns are quite different. Lung cancer was the most common cancer and the leading cause of cancer death both in urban and rural areas. Cigarette smoking, radon, secondhand smoke exposure would be major factors associated with lung cancer (7). Indoor smoking may be the main reason for lung cancer in rural areas (8). Breast cancer and colorectal cancer are more common in urban, mainly because more urban people lived a western and physical inactively lifestyle. In urban females, cervical cancer and thyroid cancer had ranked fifth and seventh, respectively, which needs to be paid more attention. Cancers from upper digestive system are still the frequent cancers in rural areas, health education and promotion and early detection should be placed priority in cancer strategies. Based on the current situation, different strategies should be implemented in different regions. Attention should not only be paid to the cancer with high incidence and mortality rates, but also to the cancer with rapid increasing trend. According to the population-based survival study in China, survival in rural areas was only half of that in urban areas (9). The main reason may be poor quality of cancer care and limited medical treatment for patients living in rural China. The government should balance the medical resources and take effective measures to bridge the gap.

With the economic development and changes associated with urbanization, as well as the growth and aging population, the incidence and mortality keep increasing in China (10,11). Targeted prevention, early detection, and treatment programs should be carried out by health department to control the increasing cancer burden.